ROS are key molecules in maintaining cell proliferation, inflammation, and cell death. ROS protect us by killing bacteria that invade our bodies, but these are also involved in aging and may cause diseases such as Parkinson’s disease, Alzheimer’s disease, cancer, diabetes mellitus, and periodontal disease. In addition, when oxidative stress, such as due to radiation or drugs, is externally applied, the amount of intracellular ROS increases or cell membrane lipid peroxidization occurs and eventually results in cell death. The primary site of ROS generation in vivo is mitochondria. It has been revealed that ROS produced in mitochondria exhibit biological defense, as mentioned above. 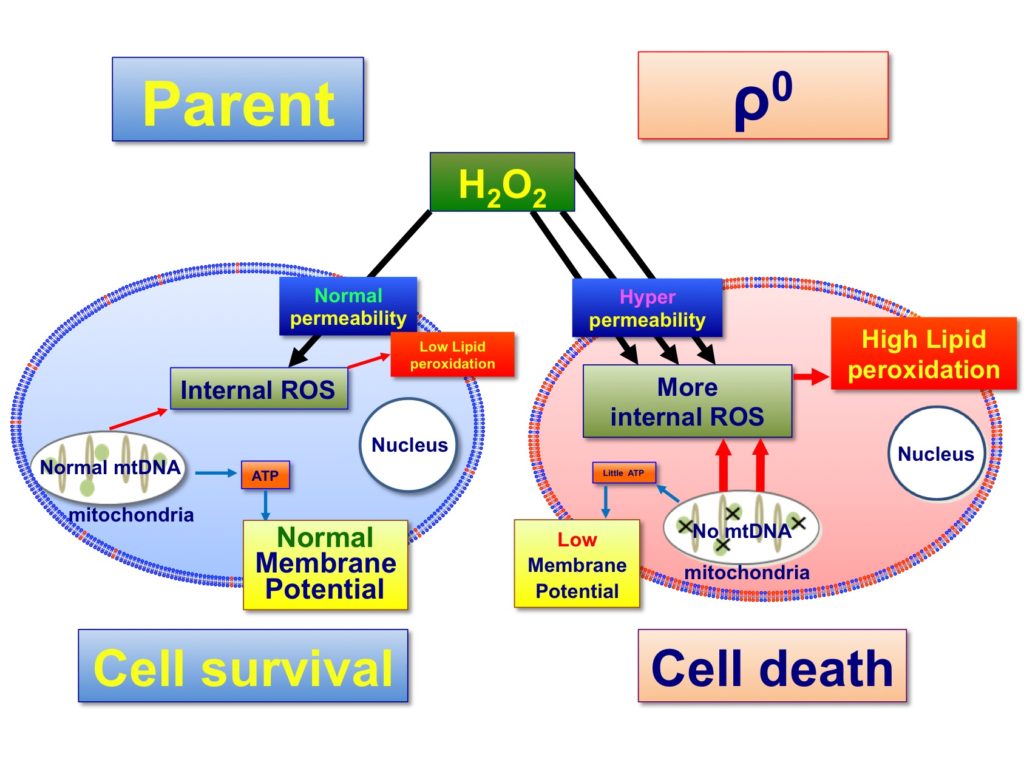 Fig. 1. The scheme of relationship between H2O2 and changes in plasma membrane peroxidation status in parent and ρ0 cells. The red membrane lipids indicate lipoperoxide. Dysfunction of mitochondria in ρ0 cells could reduce the plasma membrane potential through the production of ATP or accelerate membrane lipid peroxidation status, which could cause cell death by external H2O2 administration. The enhancement of lipid peroxidation in ρ0 cells might be explained by the increase in internal ROS via mitochondrial dysfunction due to depleted mtDNA (complete lack of mtDNA). (Tomita K. et al., J. Tohoku Med. Pharm. Univ.64 49-55 2017.)

Mitochondria have their own DNA (mtDNA) that partly encodes oxidative phosphorylation component proteins, and mitochondrial dysfunction occurs when mtDNA is impaired. Therefore, mtDNA impaired cells can serve as valuable cell models for studying oxidative stress and overcoming ROS-derived diseases. In addition, H2O2 is recognized as a sensitizer of anti-cancer therapy. A further understanding of H2O2 action mechanisms in cell models is necessary for the development of new anti-cancer therapeutic agents, protocols, or strategies.

We investigated whether established ρ0 cells contain mtDNA, extracted RNA from the cells, and performed quantitative PCR (qPCR) for ND1, which is an mtDNA-encoded gene. Complete ND1 expression silencing was observed in ρ0 cells. Next, we tested H2O2 sensitivity. Higher sensitivity was seen in ρ0 cells than in their parental cells. We also investigated the activity of catalase, which is an enzyme that decomposes H2O2 in cells. In ρ0 cells, higher catalase activity was observed despite the higher H2O2 sensitivity. The expression of other antioxidative enzyme genes was investigated, but their expression seemed unrelated to H2O2 sensitivity. We further investigated cell surface plasma membrane status using DiBAC4(3), a potential-dependent fluorescence dye. The fluorescence intensities were statistically lower in ρ0 cells with plasma membrane potential. We confirmed the internal amount of H2O2 after H2O2 administration and found that H2O2 membrane permeability was facilitated in ρ0 cells. We also found that the internal amount of H2O2 was higher in ρ0 cells than in the parent cells after 1h of H2O2 administration.

Our results suggest that changes in the plasma membrane status induced by increased internal ROS generation provide a hyper-permeability of H2O2 in ρ0 cells after H2O2 administration. The extracellular H2O2 administration to ρ0 cells may lead to higher internal ROS generation including the external H2O2 permeating the cell. The lipid peroxidation of plasma membranes induced by internal ROS (including the external permeated H2O2) will eventually result in cell death.

These results suggest a new anti-cancer therapeutic protocol if the membrane peroxidation status can be changed using selective anti-cancer agents or mitochondrial functional inhibitors. In future, we will further investigate how membrane status may be used to enhance the therapeutic effect on cancer.