Neuropathic pain (NP) is caused by the damage of the nervous system and one of the most common types of intractable pain. It is often severe, persistent, and refractory to available therapies. Although various analgesic has been developed and used for the treatment, the relief of pain in most of cases are difficult. To develop the novel therapies, the mechanism of NP has been studied from various points of view, but a detailed mechanism for NP remains largely unknown. 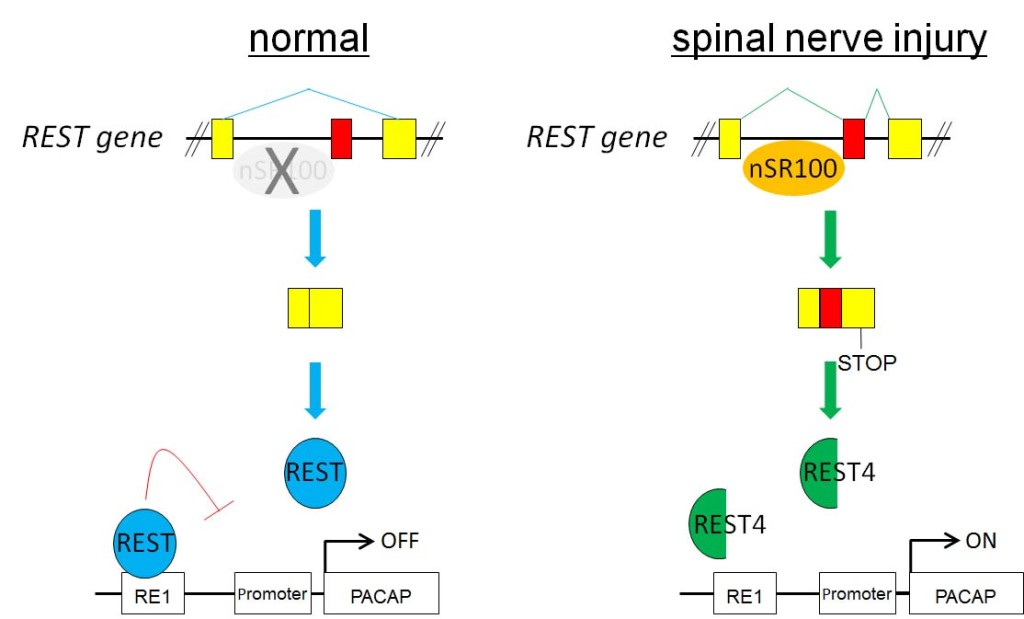 We previously reported that pituitary adenylate-cyclase activating polypeptide (PACAP) is required for the development of spinal sensitization and induction of NP produced by spinal nerve injury. PACAP is a bioactive peptide with diverse activities, widely distributed in both the central and peripheral nervous systems. Although it was suggested that PACAP is a key molecule of NP, the detailed mechanism of PACAP expression remained unknown.

In this study, we studied the mechanism of PACAP expression by spinal nerve injury. As it was reported that the expression of PACAP gene is repressed by REST in vitro, we studied the expression of PACAP, REST and its isoform REST4 in the dorsal root ganglia (DRG) of NP model mice following spinal nerve injury. We found that PACAP mRNA as well as REST4 mRNA increased in the DRG of NP model mice. REST4 is an alternatively spliced isoform of the repressor element-1 (RE1) silencing transcription factor (REST), and REST4 conducts as the repressor of REST. We also found that the splicing activator (nSR100) mRNA was also increased, and REST4 was shown to be regulated by nSR100. As a result, the expression of REST was decreased by REST4, produced by nSR100-dependent alternative splicing of the REST gene.

Further, we have found that a novel RE1 element previously predicted by in silico analysis was indeed functional for PACAP expression in the DRG following spinal nerve injury. REST bound to this RE1 in the DRG of naïve mice under normal conditions, while REST binding to this RE1 was decreased following spinal nerve injury. Previous report suggested that PACAP transcription unit has two functional RE1-like elements (NRSLE1/NRSLE2) and that the transcriptional repressor REST controls expression of PACAP gene in vitro. However we found that the regulation of PACAP gene in vivo in NP model mice was controlled through novel RE1 site other than NRSLE1/NRSLE2 upstream of the mouse PACAP gene.

It was also previously reported that the splicing of REST producing REST4 controls neurogenesis. In this study we discussed that the role of PACAP in NP is not only involved in the development and maintenance of NP, but the recovery of peripheral nerve damage because REST4 contributes to the up-regulation of PACAP as a result of spinal nerve injury. This study thus sheds light on the previously uncharacterized transcriptional regulation of PACAP and suggests a role of PACAP in the DRG following spinal nerve damage. We suggest that elucidation of the detailed mechanism of PACAP up-regulation will lead to a viable target for the treatment of NP.