Mesopotamia, Egypt, and Indus (or Harappan) are Bronze age (3rd millennium BCE) river-valley civilizations (Fig. 1A). A general perception is that large civilizations developed near large river systems that provided water resources for sustenance. But this depiction of human-river interaction becomes complex in the case of the Harappan civilization as evidenced from the distribution of its sites along both large and small rivers. A large number of Harappan sites were located along the Ghaggar-Hakra paleochannel between the Ganges-Yamuna and Indus River systems (Fig. 1B). 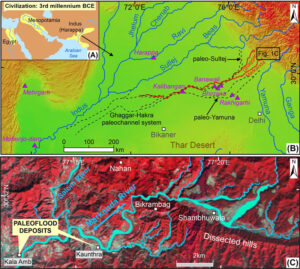 Studies on Ghaggar-Hakra paleochannels include (1) the earliest field surveys (18-19th century), (2) mapping satellite imageries (20th century), and (3) sub-surface coring and drilling (last two decades). These studies support the past existence of a large river system, often linked with the Vedic Saraswati (or Sarasvati) River of early Indian literature. Sediment dating suggests the river system was disorganized or only partially active during the Harappan civilization. This leads to a concern regarding the availability of surface water resources in the rivers for the Harappan population. The answer to this question requires an understanding of the past hydrology of the Ghaggar-Hakra river. Paleoflood deposits are key sedimentary units representing the history of past flooding events. We designed a project to map paleoflood deposits in the catchment of the Ghaggar-Hakra to reconstruct its past hydrology (flood discharge) that we believed must be higher than discharge in the modern rivers occupying those paleochannels.

A Himalayan foothill river called Markanda was suitable for the purpose as it lies in the catchment of the Ghaggar-Hakra (Fig. 1C). Fluvial landform mapping showed that Markanda valley was carved into several levels of fluvial terraces. Sedimentological investigation showed layers of paleoflood deposits preserved in the fluvial terraces (Fig. 2A, B). This provided an opportunity to compare the modern versus paleodischarge of the Markanda valley.

Unfortunately, a long-term instrumental record was not available but fortunately, an annual record of modern-day discharge (1977-78) of the Markanda river was available. We utilized this data to calibrate the SWAT model (Soil and Water Analysis Tool; developed by USDA-ARS) to obtain simulated data of daily discharge of the Markanda valley (Fig. 2C). We applied statistical technique (log-Pearson type III distribution) on the simulated data to predict discharge for a range of return period floods. The estimated discharge (≈300 m3/s) for a 100-year return period flood was found nearly 13 times the modern monthly discharge (22 m3/s) (Fig. 2C, D).

DGPS survey of Markanda valley cross sections (at Kaunthra & Kala Amb) was done to measure the elevation of past flooding represented by the paleoflood deposits (Fig. 1C). We designed a ChanGe tool, in the MATLAB program, that uses DGPS data to calculate channel cross-section area (A). The tool further utilizes Manning’s equation (a flow resistance formula) to obtain flow velocity (ν) and finally calculates flood discharge (Qpf = νA). We found the flood discharge at Kaunthra (4.6 × 103 m3/s) and Kala Amb (3.6 ×104 m3/s) (Fig. 2E, F). To know the timing of such flooding events, we used optically stimulated luminescence dating technique. The samples of paleoflood deposits yield dates (3.8 ± 0.3 and 3.9 ± 0.2 thousand years) in a range of timing of the mature and late Harappan civilization.

We conclusively showed that the Markanda River’s discharge was several orders of magnitude higher during the Harappan time in comparison to the modern-day discharge of 100-year return period flood. Thus, we posited that the paleoflood deposits represent a stronger hydrological regime in the catchment region that provided sufficient flows downstream in the Ghaggar–Hakra region during the Harappan civilization.