Melanoma is the most lethal type of skin cancer. In 2012 232,130 persons were diagnosed worldwide, and 55,488 estimated deaths occurred due to melanoma. 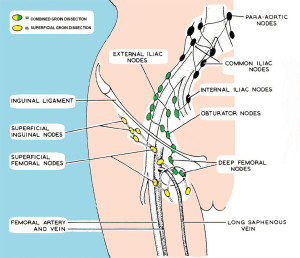 There is ongoing debate whether this radical CGD is really necessary, or if a SGD would suffice. Morbidity may be more limited when performing SGD alone, and several studies have shown comparable local control rates and similar survival. However, if deep pelvic lymph node metastases are suspected at preoperative CT-scan or PET-CT scan, a CGD is warranted in order to remove all visible tumor in the pelvic area.

A total of 209 patients were selected who underwent a CGD in one of four tertiary melanoma centers in the Netherlands between 1992–2013. Selection was based on presence of an adequate preoperative (PET) CT-scan and a detailed pathology report describing the number of removed lymph nodes. Analyzed risk factors included baseline and primary tumor characteristics, number of removed inguinal lymph nodes (including number of tumor positive lymph nodes), inguinal lymph node ratio (LNR = no. of tumor positive inguinal nodes divided by the total no. of removed inguinal nodes), and suspicious deep pelvic lymph nodes on preoperative imaging (CT or PET-CT-scan).

A model was designed to predict absence of pelvic lymph node metastases based on the following: absence of suspicious pelvic nodes on preoperative imaging, number of positive inguinal lymph nodes, LNR, and presence/absence of extracapsular tumor extension. A combination of negative imaging, few positive inguinal lymph nodes, a low LNR and no extracapsular extension could accurately predict the absence of pelvic lymph node metastases in 84% of the patients selected for this model.

This study demonstrates that patients with negative imaging, few positive inguinal lymph nodes, no extracapsular tumor extension and a low LNR have a low risk of positive pelvic lymph node metastases and may safely undergo an SGD alone. The prediction model tested will be validated and may be used for future patients to select them for SGD safely.