Gastrointestinal parasites are a major health challenge for all grazing animals, whether they are located on paddocks and rangelands (such as horses, sheep cattle or goats) or in zoos (such as giraffe and zebra).

In a previous entry (Ref: New way to control parasites in grazing animals ) we explained how the overuse of chemical treatments for controlling these parasites has blunted their effectiveness and how a harmless fungus (called Duddingtonia flagrans) offers a new means of parasite control.

The fungus exploits a weakness in the parasites’ life cycle, catching and killing their juveniles (“larvae”} and using them for food. It is these larvae that are responsible for spreading and maintaining the parasite infection within the grazing herd. 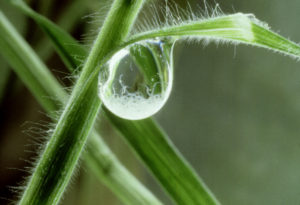 In practice, the spores of the fungus are fed to the animals and simply pass through into their manure, which is also where the parasites deposit their eggs. When the eggs hatch into larvae, the spores geminate and fungus does its work, stopping the larvae from migrating out onto the pasture. There they would otherwise lay in wait (Fig. 1), to be carried into the digestive systems of the animals as they graze on the grass, which is how the parasite infection is perpetuated.

In the previous entry, the use of the fungus to control parasites was outlined and the results of field trials to demonstrate its effectiveness in sheep were presented. Next, these trials were extended to horses, cattle and goats, where the trial design differed to that used for sheep. Firstly, groups of animals were selected, each harbouring a parasite infection. Most of the parasites were resistant to chemical treatments and in some cases the infections were boosted with additional resistant parasites.

Each animal was kept in a separate pen and fed a nutritious supplement (Livamol®) without any spores of the fungus. After about a week their manure was collected and placed in randomly-arranged pats in a paddock (these were called the “Control pats”). Usually, each sample was divided and sent to two locations with different climates.

The process was then repeated, but this time the Livamol included BioWorma®, a product that contains the fungal spores. The resulting manure pats (“BioWorma pats”) were placed on the pasture at the same sites as the Control pats.

Comparing the number of larvae that emerged over time onto the grass around the Control pats with the number around the BioWorma pats gave a measure of how well the fungus was working. Many trials were conducted, in different seasons of the year and in different climatic zones, and the results were averaged for each type of animal, as shown in Figure 2.

This shows that many larvae hatched from the eggs in the Control pats and successfully migrated onto the pasture blue lines). However, if the animals had been fed BioWorma the larvae were mostly killed before they could emerge (red lines). The results were similar, regardless of the animal species (horses, cattle or goats), climatic zone or season, confirming the positive results previously obtained with sheep. Trials conducted with BioWorma by other workers have shown a similar effect in a range of zoo animals.

By working to minimise the number of infective larvae on the pasture, the fungus attacks the life cycle that spreads and sustains the parasite infection in the host animals.

Independent tests have shown that BioWorma is safe for the recipient animals and their human handlers, leaves no residues in meat or milk and is environmentally benign.

This shows that parasite control in grazing animals really can be achieved by killing ‘em in the cow pats.