The progressive loss of dopaminergic innervation of the basal ganglia, in particular of the dorsal striatum (putamen) is responsible for the motor signs of Parkinson disease such as bradykinesia, rigidity and loss of postural reflexes. Present therapies are centered on the reduction of the dopamine loss. Yet, just how dopamine deprivation leads to these alterations is not fully understood. This requires determining how local striatal interneurons behave when dopamine deprived. In the striatum, the vast majority of neurons use the inhibitory transmitter g-aminobutyric acid (GABA) as their transmitter and thereby inhibit their targets. Yet, a small population (circa 1%) of cholinergic interneurons generates a typical conditioned pause response during acquisition of a sensorimotor association. Therefore, we are dealing with 3 transmitters and understanding how they interact in health and disease is instrumental. 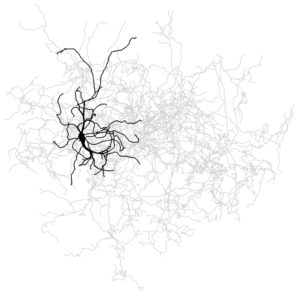 Fig. 1. A giant cholinergic and GABAergic interneuron in the striatum of dopamine depleted mice. Note its gigantic dendritic arbor, the axonal arbor is not depicted as it extends far the limits of the slice width.

Although, classically, neurons release a single transmitter, it is now apparent that many neurons prefer having a dialog via the two transmitters they release. We first wondered whether striatal cholinergic interneurons might also release 2 transmitters. Using intracellular markers labeling (Lhx6) for GABAergic neurons, we discovered that half the population of cholinergic interneurons also express GABAergic markers suggesting that they might indeed release two transmitters. This was confirmed by both RTqPCR showing cholinergic and GABAergic mRNAs (gad2). We then provided direct evidence in pair recordings of two adjacent giant cholinergic neurons showing evoked synaptic currents with both signatures. Therefore, yes striatal cholinergic neurons also release GABA. Yet a puzzling surprise came when we started examining what happens when the other player namely dopamine is absent.

In the dopamine-depleted striatum, dual transmission GABA/Ach interconnections dramatically increase suggesting that they are somehow exuberant when dopamine deprived as if this unleashes the trend to have this synaptic dialog. This raised a fundamental issue namely whether GABA action is altered when dopamine deprived. Indeed, in many brain disorders, the GABA neurotransmission is dramatically altered because of an intracellular accumulation of chloride that strongly reduce the inhibitory strength and can even reverse the synaptic inhibition to excitation thereby altering profoundly network operation. We asked whether this was also the case in Parkinson disease. Indeed, the GABAA current becomes inward like the nicotinic one instead of outward indicating high intracellular chloride and a reduction of inhibition. Interestingly, the pause (suppression of firing) response evoked by cortical afferents stimulation is also abolished validating a major shift in cortico-striatal circuit operation.

The final confirmation of the importance of these observations came when we administered the NKCC1 chloride importer antagonist Bumetanide known to restore GABAergic inhibition and to attenuate many brain disorders. Bumetanide restored the inhibitory pause evoked by cortical stimulation and attenuated the severity of motor signs in mice models of Parkinson disease. This is quite important since a preliminary clinical open trial in 4 patients have shown an amelioration of the disorder. A larger phase II trial on 40 patients has been initiated in France to test whether the convergence of clinical trials and basic science opens novel avenues in understanding and treating Parkinson disease. Future studies will aim at understanding just how dopamine provides the tempo for the concert played by acetylcholine and GABA.