Particularly harmful particles? Sifting out the dirt to find the microplastic effect

Research on microplastic effects in aquatic environments has expanded dramatically in the last decade. However, many important questions remain largely unanswered. We still do not know, for example, what are the safe levels of microplastic in different ecosystems. This kind of information is vital for the regulation of the microplastic as a pollutant. What makes this situation even more challenging is that we have a very unsettled methodology to evaluate the toxicity of solid waste, such as plastic litter. 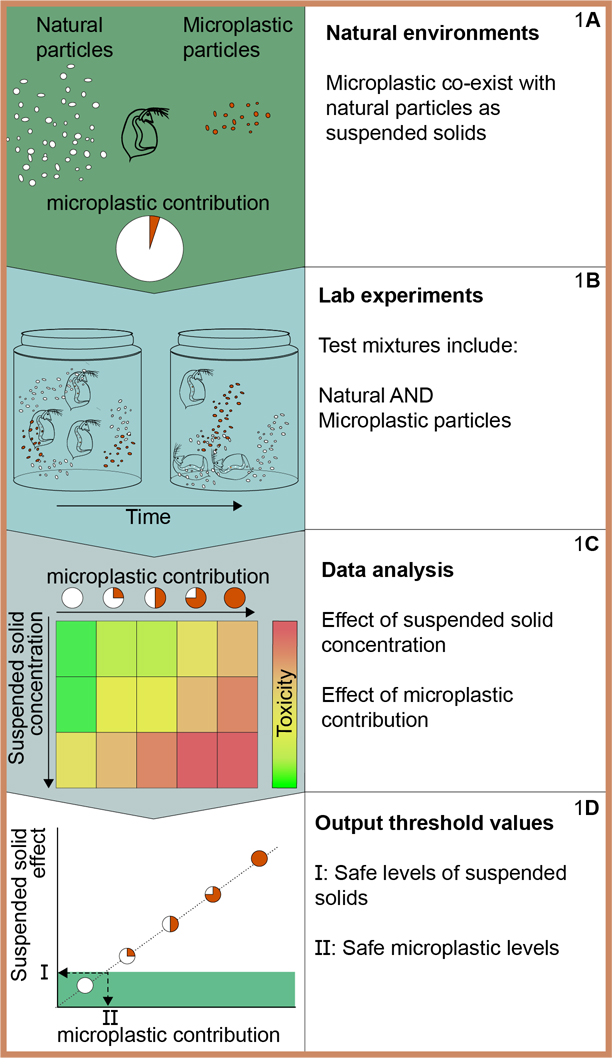 We presented a novel approach for testing the hazard potential of solid waste particles, including microplastic. Natural lake or seawater always contain small particles, both mineral and organic, in the same size range as the microplastic (Fig. 1A). However, relative to the amount of these particles, the quantities of microplastic are low. At high levels, the naturally occurring particles, such as clay, can be harmful to various animals, from water fleas to fish, in ways similar to microplastic. In very turbid water, solid particles may hamper breathing and feeding of these animals by clogging their gills and guts.

To determine safe levels of microplastic, we must find out what contribution of plastic to the total amount of particles in the environment that causes no harm. Using this concept, we developed a method to estimate the effects caused by microplastic in a mixture with natural particles, i.e., the real-life exposure scenario.

The first step of the test is to identify the hazardous level of all particles in the mixture. Here, the test system can be adjusted to mimic turbidity levels in different waters (i.e., from a clear water lake to turbid estuaries and rivers) and take into account seasonal and human-induced variability. The second step is to determine how much microplastic is safe in that environment and provide threshold values that are easy to understand and set as acceptable in environmental regulations.

We tested our approach experimentally using water fleas exposed to a mixture of clay and polyethylene terephthalate (PET). These animals filter their food (e.g., algae) from the water and are, thus, naturally exposed to suspended solids (particles). In the experiment, we manipulated both the amount of total suspended solids (i.e., clay + PET) and PET proportion in the mixture (Figure 1B). The water fleas survival (Fig. 1C) provided two threshold values. I) what total suspended solid levels they can tolerate and II) the safe level of PET in this mixture (Fig. 1D).

We found that water fleas can tolerate up to 24 mg per L of suspended solids, which is a relatively high concentration typical for turbid waters. When the PET proportion in the suspension exceeded 2.4%, the mixture became more hazardous than that composed by the pure clay. These levels of microplastic are very high compared to the concentrations reported so far from lakes and seas.

To disentangle responses to microplastic exposure from those to other suspended solids, both microplastic and natural particles must be present in the test system. We believe that more ecologically relevant test methods are needed for understanding how and when microplastic becomes a hazard.