Patterns of mutation in cancer genes

In most cancers, the majority of the changes to the DNA (termed mutations), acquired during the disease process are inconsequential in terms of driving the cancer, however a few of the changes in a small set of genes are crucial to the development of the disease.  The genes that harbour these critical mutations are called ‘driver genes’ and the much effort is required to identify them, and to work out whether any of the defects are ‘actionable’ by a cancer therapy. 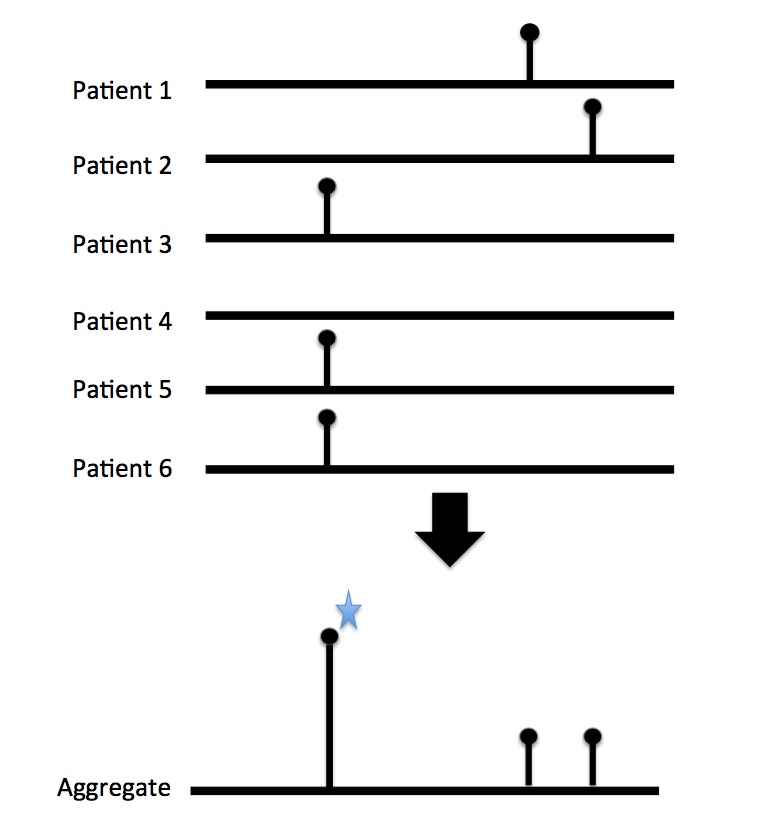 Fig. 1. This figure illustrates how mutations detected in the same gene in multiple patients can be aggregated to find the most significant or ‘hotspot’ mutation (highlighted with a star).

One successful approach that identifies driver genes is to sequence tumours from large cohorts of patients with a specific cancer (e.g. pancreatic cancer), and then use powerful statistics to identify those genes in which defects significantly recurrently occur. However, this only works for genes that are mutated a lot and generally misses low frequency drivers that may also contribute to the disease.

Driver genes can be classified by the manner in which, when mutated, they contribute to the disease process:  Tumour suppressors contribute to the development of cancer when mutations (or epigenetic silencing) result in their loss of function (LOF).  Often both copies of the gene require a defect, such as a missense or truncation mutation, on one allele in combination with a complete loss of the second copy of the gene.  This commonly occurs in kidney renal cell carcinoma, where the loss of chromosome arm 3p, combines with concurrent mutations on the remaining allele resulting in the von-Hippel-Lindau tumour suppressor gene (VHL) being effectively switched off.

In oncogenes an increase in activity, or a change of function is required for tumorigenesis and usually only a single defective copy of the gene is required.  This is exhibited in BCR_Abl in chronic leukaemia where a translocation of DNA material renders Abl-kinase insensitive to signals, constitutively activating it. This can also be seen in in malignant melanoma where the V600E missense mutation constitutively activates B-Raf.

So, a tumour suppressor gene can be disrupted by simply destroying its function, whereas to activate an oncogene very specific changes are needed. We can use these very different characteristics to distinguish between tumour suppressor genes and oncogenes. We start by mapping all the mutations from a cohort of patients onto a single genome. The mutational patterns for each gene can then be analysed (Fig. 1).  These patterns vary greatly between tumour suppressors and oncogenes. For instance, tumour suppressors tend to have a greater number of truncating mutations, as the majority of truncating mutations will result in the complete loss of function of the protein product.  Missense mutations in tumour suppressors are often liberally dispersed along the length of the gene as the protein function can be disrupted by mutation at a variety of positions.  Conversely, in oncogenes, there are far fewer truncation mutations and missense mutations tend to cluster at distinct locations. 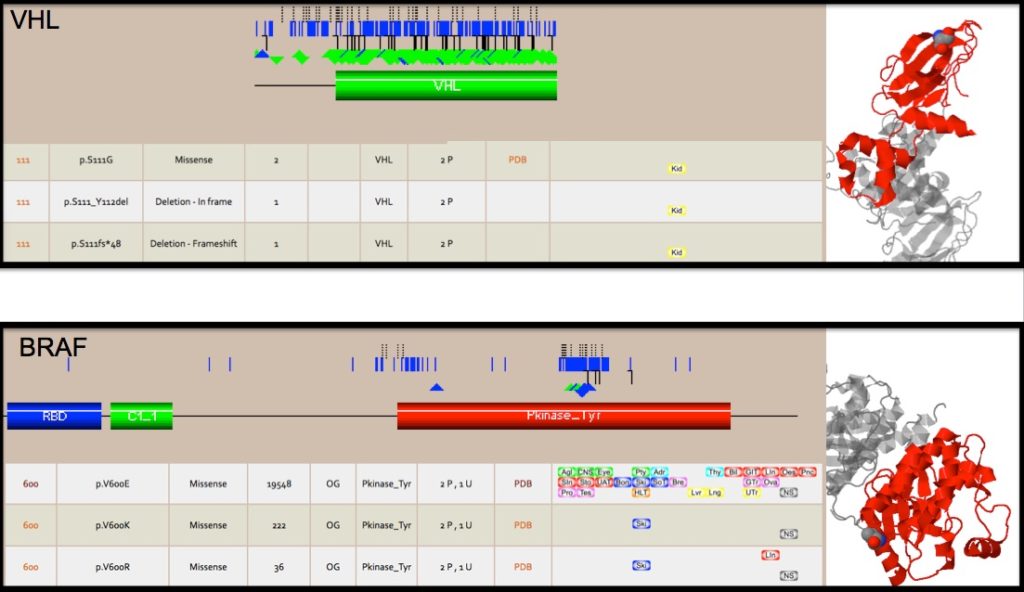 Fig. 2. This is an illustration of the data visualization available on the different webpages on MOKCa web-interface (http://strubiol.icr.ac.uk/extra/mokca/) shown for both a tumour suppressor (VHL) and an oncogene (BRAF). A schematic diagram of the domain architecture is shown for each protein with the positions of somatic mutations mapped to the protein sequence. Blue lines indicate missense mutations, dotted black lines indicate silent mutations and triangles are used to show insertions (pointing down) or deletions (pointing up). In frame indels are coloured blue, and frame shift indels are coloured green, solid black lines indicate nonsense mutations. Also shown is an extract from the summary table for mutation aggregates. As well as describing the mutations and their frequency it also indicates which domain the mutation is in, whether it is near any post-translational modifications and highlights which cancers it is found in. Finally an example is given highlighting the position of a mutation within the protein structure for each protein. The domain containing the mutation coloured in red, and the mutated residue is displayed as a space filling model.

The mutations that cause the tumour suppressors to be inactivated and those that activate the oncogenes are termed driver mutations.

We have developed the MOKCa database (http://strubiol.icr.ac.uk/extra/mokca) to help researchers identify which genes are tumour suppressors, oncogenes and cancer drug targets and to help identify the driver mutations within them.  Mutation data from the COSMIC database (http://cancer.sanger.ac.uk/cosmic) have been mapped to their protein products, and the mutations have been structurally and functionally annotated.