In organic chemistry, the outcomes of thermal and photochemical reactions are different. Reactions that do not proceed even at 200 °C proceed photochemically below room temperature, e.g., photosynthesis, the conversion of light (solar) energy to chemical energy in plants, enabling organisms to live. Because of the depletion of fossil fuels, the utilization of solar energy has become increasingly important. Thus, studies on photochemical reactions have attracted much attention. 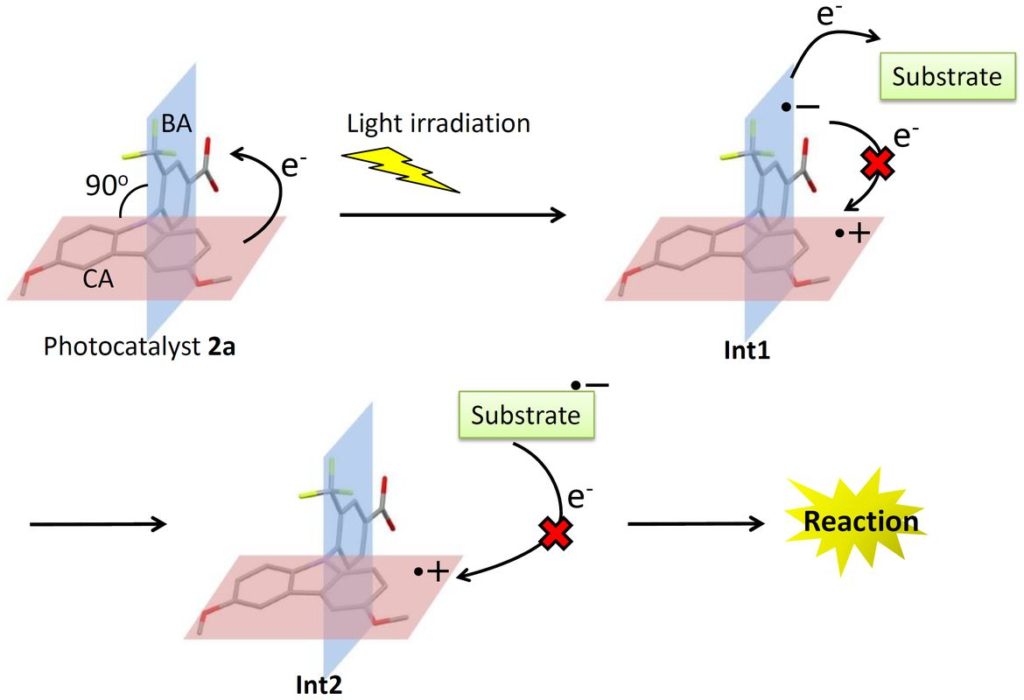 A single-electron transfer (SET) is one of the basic elementary processes in photoreactions. The chemical bonds in normal molecules contain a pair of electrons and not an unpaired electron, because the molecules with a singly occupied molecular orbital (SOMO) are very unstable and readily react with other molecules. Photoirradiation induces a SET between two molecules, generating a very reactive radical species with a SOMO. This leads to unique reactions not possible via a thermal process. Therefore, the efficiency of SET is the key factor affecting the entire photochemical process. A SET is very often accompanied with an unproductive backward electron transfer (BET). The photochemically generated pair of radical anion and cation undergo BET prior to the next chemical process, resulting in apparently no reaction; thus, the prevention of BET and resulting improvement in SET is an important research topic for the development of efficient photoreactions.

This study demonstrates that a SET from a charge-transfer state hinders the unproductive BET. This new finding can help in the development of new photochemical reactions in the future.

First, we designed and synthesized 4-carbazolyl-3-(trifluoromethyl)benzoic acid (2a, Fig. 1). This molecule consists of carbazole (CA, an electron donor) and benzoic acid (BA, an electron acceptor); they are covalently bonded at the nitrogen atom of the CA. A bulky trifluoromethyl group is substituted on the BA moiety at the ortho position to the CA group to ensure a perpendicular connection between the two aromatic rings. Upon photoirradiation, the CA group is excited, followed by the SET event from the CA to the BA moiety. Because the two aromatic parts are perpendicular to each other, a charge-transfer state is generated; i.e., the radical anion of BA and radical cation of CA that are electronically independent exist in one molecule (Int1). This charge-transfer state Int1 can transfer an electron from the radical anion BA moiety to the other molecule (Sub), affording Int2. For the occurrence of BET, the newly generated Sub·– needs to move the electron to the spatially distant CA radical cation. Therefore, the BET is slower, thus improving the productivity of the desired photochemical reaction.

In fact, similar tactics are also observed in photosynthesis to make the best use of solar energy; the proteins create a three-dimensional environment that can separate the radical ion pair upon photolytic generation to efficiently prevent the BET (charge recombination). It can be said that this study artificially realizes this in much smaller space than Nature does in photosynthesis by means of enzymatic environments.