Phenotype as agent, not product of reproductive success

The phenotype of an organism is the aggregate of its physical traits. It is the net result of the merging of parental gene pools, and in Darwinian evolutionary terms its ‘fitness’ is considered a measure of evolutionary success. However, with the emergence of Lamarckian epigenetic inheritance from the environment, phenotype takes on a very different character, actively interacting with the environment to retrieve information from the environment in order to optimize the acquisition of epigenetic ‘marks’ that modify DNA transcription. That process occurs in the germ cells (egg and sperm) during meiosis, where there is sorting of such marks. The marks are further sorted during embryogenesis and during the life cycle based on homeostatic principles. This mechanism integrates the organism and its environmental niche based on principles of cellular evolution. 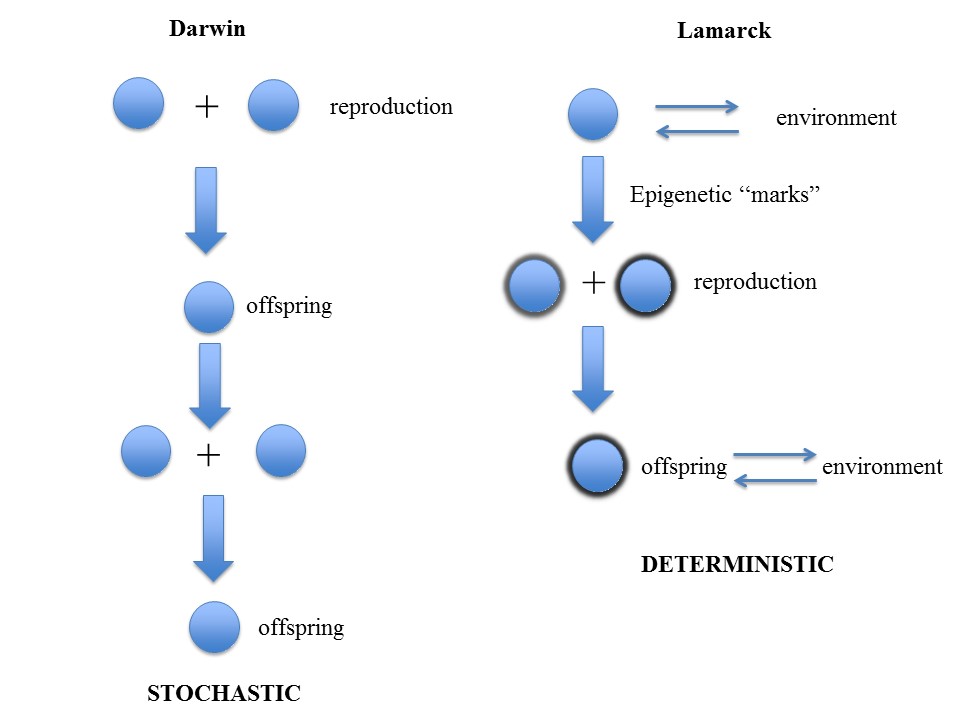 This way of understanding the generation of phenotype is consistent with the concept of Niche Construction. When cells respond to environmental stresses through epigenetic inheritance, evolution is understood as much more dynamic and interactive with its surroundings than by means of the filtering mechanisms of Darwinian evolution. Moreover, the phenotype as agent concept reflects the process of evolution as a self-organizing, self-referential mechanism that originates within the unicellular domain, and always remains contingent on it. Seen in this light, the phenotype becomes a directed product of cellular activities in response to its environment, rather than a mere result of random forces.

Most importantly, the effects of epigenetic inheritance on the cell within its physiologic constraints are subject to hypothesis testing and falsification, whereas Darwinian evolution is not. Natural Selection is still relevant, but not as the primary mechanism of evolution. With this consideration of phenotype as agent, every aspect of the life cycle can be viewed as derivative of cellular needs and imperatives that determine the timing and expression of each life cycle stage. Of these, arguably the endocrine system has primacy, bearing in mind that the endocrine system itself is its own cellular composite of epigenetic marks and their differential activation, ever-dependent upon environmental stresses.

According to the Darwinian narrative, the phenotype is the net result of differential survival and reproductive success. However, we now know that there is direct inheritance from the environment. So it can be argued that epigenetic mechanisms are a primary means for organisms to evolve in reciprocation to environmental stresses, exemplified by niche construction. As a result of this new perspective on epigenetic inheritance, the iterative return of eukaryotic multicellular organisms to their unicellular form becomes the primary stage for resolving differences between the organism and its environment. Therefore, a renewed evolutionary narrative centered on the primacy of epigenetic inheritance within deeply rooted cellular mechanisms can be considered. Under such conditions, cellular imperatives determine the course of evolution rather than random mutation and selection. Phenotype becomes a means through which organisms explore the outward environment and its stresses. Those impacts are then revisited by the eukaryotic unicell, enabling the reiterative extension of phenotype into its environment to experience subsequent environmental impacts in service to its next set of adjustments. It is this internally consistent reciprocation that shapes the phenotype. When considered as a whole, this new concept is a novel testable and refutable path to further progress in evolutionary theory and biomedicine.