When neurons work they signal each other using action potentials, which is a rapid change of membrane potential and underlies the brain function. In most neurons action potentials accompany changes of intracellular concentration of calcium ions. Calcium ions trigger many metabolic processes within the neuron including gene expressions, and lead to rearrangements of neural circuits in order to adapt brain function to events we encounter in daily life. The electrical activity of neurons is measured by inserting an electrode in the brain, while the calcium concentration is measured as a fluorescence signal using calcium sensitive dyes or proteins. By labeling neurons with these calcium sensitive compounds, neurons can be imaged using a fluorescence microscope. Imaging requires the dye to be illuminated by excitation light through the microscope lens, and the emitted fluorescence light is captured through the same lens. 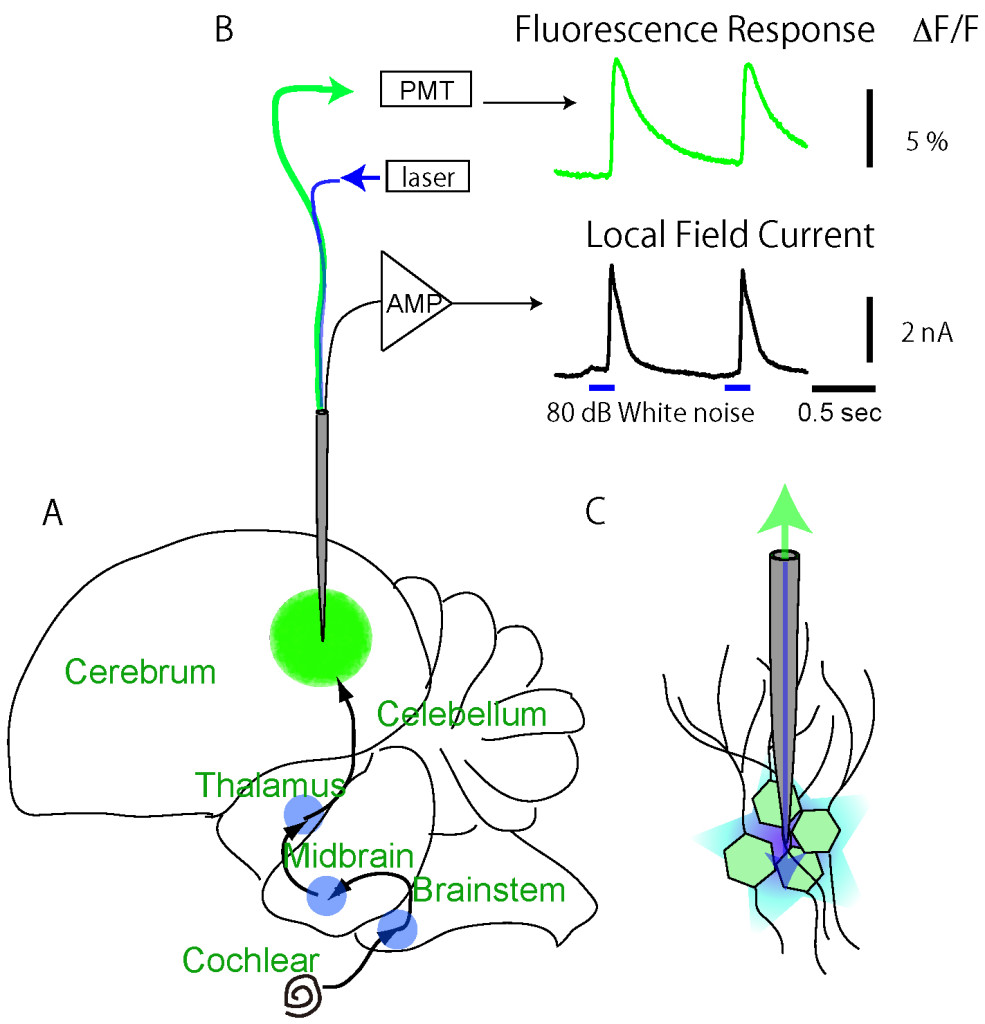 Fig. 1. Photo-Metric patch Electrode. A; insertion of a PME to the fluorescence dye (OGB-1) labeled cortex of a chick brain. B, Optical signal and electrical signal recorded simultaneously in response to repeated sound stimuli. Laser light of 488 nm was transmitted through the PME and calcium dependent fluorescence was captured at the tip of the electrode. Here, local field response was enhanced by local application of GABAzine through the PME. C, an image of PME to record local optical signals from neurons. PMT; photomultiplier tube, AMP; electrical amplifier, ΔF/F; percentage of fluorescence change, GABAzine; an antagonist of inhibitory neurotransmitter, GABA. Blue arrows indicate laser light and green arrows indicate fluorescence signal.

The brain function is highly integrated in the cortex, a surface layer of the brain, as the electrical activity of neurons are integrated and transformed step-by-step in the ascending  pathway to the cortex. Moreover, calcium imaging of cortex neurons disclosed many interesting aspects of neural activity. Accordingly, simultaneous recording of electrical activity and imaging of neurons is ideal. However, simultaneous recording of these two signals is not easy because of diffraction of light in the brain tissue. The diffraction of both excitation light and the fluorescence light blurs the microscope images in deep brain tissue.

We have developed a photometric patch electrode (PME), to overcome the depth limitation of optical measurements, and monitored the optical signal simultaneously with the electrical signal. PME even has a capability to modify the neural activity by local application of chemicals. The PME uses a patch electrode as a light guide to transmit laser light to the neuron and capture the excited fluorescence at the tip of electrode (Fig. 1.). Accordingly, the fluorescence signal is not an image of neurons, but the intensity of fluorescence light that reflects the neural activity.

We applied the PME to monitor acoustic neural responses. We injected a membrane permeable calcium indicator dye locally to label auditory neurons in advance, and then sound driven electrical and calcium fluorescence signals were monitored by PME. The acoustic information is first captured by hair cells in the cochlear from the airborne sound, transduced into a series of action potentials in auditory nerve fibers, processed and transformed successively in the ascending auditory pathway in the brainstem, midbrain, thalamus and the auditory cortex. The calcium signal appears first as a small transient phenomenon in the brainstem and the midbrain nuclei, but in the cortex it is large and long lasting and is observed as slow waves simultaneously with the slow waves of electric field response; both signals are correlated and likely reflect the higher order neural activity underlying processing and perception of acoustic signals. In near future with the advancement of a variety of fluorescence monitoring molecular compounds, PME can be used as a powerful tool to explore neural activity simultaneously in electrical and optical aspects to understand how neural information is processed, drives the metabolism and is transformed to motor activity to control our behavior, or to form our intellectual capacity.