Dementia is a clinical syndrome characterized by cognitive symptoms, which lead to disruptions in many aspects of daily life. The most common type of dementia is Alzheimer’s disease, which affects 5.3 million people in the United States alone. With the ever increasingly aging population, the number of people with dementia is expected to rise even further and this has prompted the World Health Organization (WHO) to denote dementia as a public health priority. Presently, no cure for dementia is available and current pharmacological treatments only serve to reduce symptoms. Because of the inherent costs and possible side-effects of pharmacological treatments, other therapies, such as physical activity interventions, are an appealing alternative for people with dementia. Previous studies have revealed that cognition may be positively influenced by physical activity. This positive effect could be explained by the effects of physical activity on physiological processes in the brain, which enhance general brain vitality, as shown in animal studies. For the elderly population of people over 65 years old, including people with dementia, the WHO recommends a minimal of 150 minutes of physical activity per week to remain physically and mentally healthy. However, studies aiming to determine the effectiveness of physical activity to reduce cognitive symptoms in people with dementia have shown mixed results. 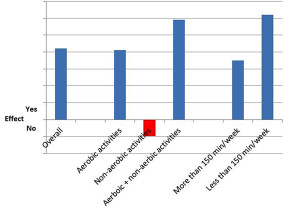