In recent years, the folding and unfolding of single macromolecules has been largely investigated through atomic – force microscopes (AFM), laser optical tweezers (LOT) and magnetic tweezers (MT), which are able to apply external forces directly to chemical entities. These measurements have been named force spectroscopy experiments since it is possible to investigate kinetic and biochemical properties of such molecules with purely mechanical tests. In particular, the single-molecule manipulation has been largely employed for biopolymers such as proteins, RNA and DNA. The direct quantification of the elasticity of individual molecules allowed to investigate for the first time the thermodynamics and the statistical mechanics of small systems, i.e. small enough to be far from the thermodynamic limit. 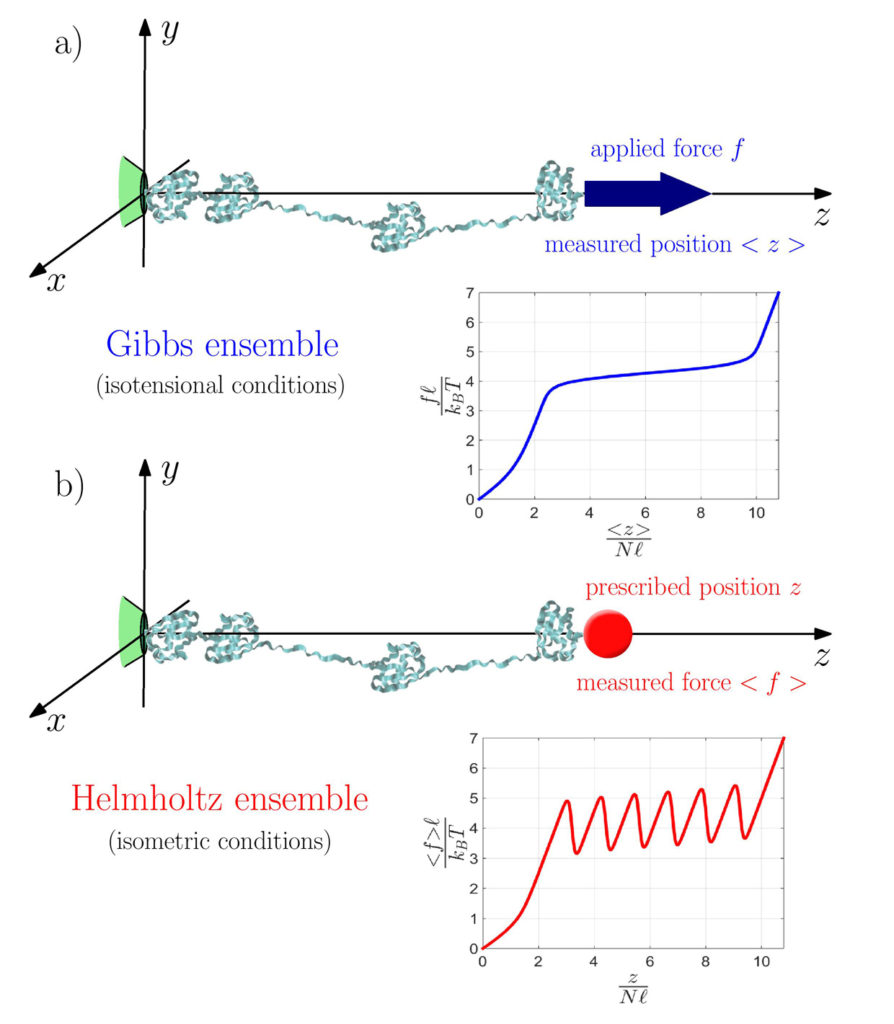 Fig. 1. Scheme of the statistical Gibbs (a) and Helmholtz (b) ensembles, corresponding to the isotensional and isometric conditions applied to a chain of N domains. The plots correspond to typical experimental results measuring the normalized force versus the normalized extension under the two distinct conditions.

Mechanically induced unfolding of monomers or molecular elements of a chain (overstretching regime) is a fundamental phenomenon encountered across the scales from polypeptides to cytoskeletal actin networks and nucleic acids. From the chemical point of view, it is based on the conformational transformation

of a molecular structure exhibiting two (or more) metastable configurations. On the other hand, from the mechanical point of view, it can be represented by an interaction potential composed of two (or more) potential wells, corresponding to the stable conformational states.

As above said, the unfolding process can be experimentally examined by measuring the force-extension relation with force spectroscopy techniques. The devices employed have different equivalent stiffness, over the wide range from 10–4 to 10-5 pN/nm. Therefore, depending on the equivalent stiffness of the device, the stretching experiment corresponds to a situation placed in between the Gibbs and the Helmholtz ensembles of the statistical mechanics. In particular, the experiments at constant applied force (extremely soft devices) corresponds to the Gibbs statistical ensemble (Fig.1a), and the experiments performed at prescribed displacement (extremely hard devices) are a realization of the Helmholtz statistical ensemble (Fig. 1b). Typical experimental force-extension curves are also shown in Figure 1. The Gibbs (plateau-like) response can be interpreted by supposing that the conformational change occurs simultaneously for all the domains at a given threshold force (cooperative process). On the other hand, the Helmholtz (sawtooth-like) response shows that the domains unfold progressively in reaction to the increasing extension (non-cooperative process).

The important point from the theoretical point of view is to explain these two completely different force-extension behaviors and to develop a model able to reproduce the plateau-like response for soft devices and the sawtooth-like response for hard devices. In this work, in order to propose a solution to this problem, we developed a theory, named spin variables approach, which is able to yield force-extension curves in qualitative agreement with experimental ones. Therefore, this theory allows us to give a good interpretation of the cooperative and non-cooperative processes observed within the Gibbs and the Helmholtz ensembles, respectively.

The idea is the following. The exact mathematical analysis of a double- or multi-basin energy potential is rather complicated from the statistical point of view because of the critical calculation of the partition functions. This point is even more striking when dealing with the Helmholtz ensemble because of the particular constraint imposed by the prescribed chain extension. Therefore, to describe the system more easily, we define new internal discrete variables, which are discrete and behave like spin variables. These discrete quantities (defined for any element of the chain) assume a finite number of values and allow us to identify the basin explored by each element. Consequently, each basin of the potential energy can now be described by a simple spring-like (quadratic) potential, thus facilitating the mathematical analysis of the problem. This permits to evaluate the partition functions analytically and the force extension curves obtained exhibit the behavior shown in Figure 1 for the two ensembles considered.