Polybrominated diphenyl ethers (PBDEs) are man-made chemicals that were used on many industrial and consumer products to reduce fire risk. The commercial PBDE mixture that was used extensively in North America for application to polyurethane foam, textiles and electronic components was composed predominantly of two PBDEs, named BDE-47 and BDE-99. PBDEs can leach out of products during their manufacture, use or after disposal. As a consequence, PBDEs have become widespread environmental pollutants. BDE-47 and BDE-99, for example, have been detected in household dust and indoor air, in wildlife, and in human blood, breast milk and fat. Production of the PBDEs was discontinued in North America in 2004 but these compounds continue to linger in the global environment. The concern with PBDEs is that they are persistent, accumulate in food chains and can produce toxicity. 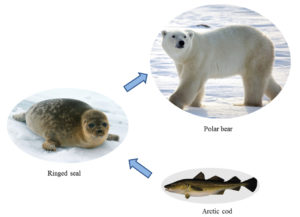 In the Arctic, PBDEs have been found in fish, seabirds and marine mammals. Long-range transport from more southerly locations has been suggested as the main source of these contaminants. Polar bears (Ursus maritimus), which are at the top of the Arctic marine food chain and are distributed throughout the arctic circumpolar regions, have a diet high in fat, which tends to accumulate lipophilic compounds such as PBDEs. The most commonly detected PBDEs in fat tissue from polar bears and other marine mammals such as ringed seal are BDE-47 and BDE-99. The toxicity of PBDEs to polar bears is unknown but studies with laboratory animals have shown that exposure to BDE-47 or BDE-99, at relatively high concentrations, can affect learning behavior, hormone levels and thyroid function.

The main route for the metabolism and elimination of these chemicals in animals, including humans, starts with reactions carried out by enzymes, called cytochrome P450 enzymes, that are present in the liver. Cytochrome P450 enzymes convert PBDEs into hydroxy metabolites that are more water soluble, which aids their removal from the body. Evidence of PBDE metabolism by wildlife species, especially arctic marine mammals, is limited. We were interested in studying PBDE metabolism by polar bears and in determining the importance of metabolism in the accumulation and toxicity of these chemical contaminants. The metabolism of BDE-47 and BDE-99 was evaluated using archived liver samples from fifteen polar bears that had been collected for a previous study and stored in our ultra-low temperature freezer. Using sophisticated laboratory instrumentation for chemical analysis to measure formation of hydroxy metabolites, we detected a total of 22 metabolites of BDE-47 and BDE-99. Some of these metabolites have also been found in blood samples from laboratory animals that had been treated with PBDEs and in blood samples from people, who had been living or working in contaminated areas, but very few hydroxyl metabolites had been observed in blood or fat samples from polar bears. The study confirms that polar bear liver is capable of metabolizing PBDEs. What remains to be determined is the rate of metabolism and whether it is too slow to prevent the build-up of PBDE levels in polar bears.

Fig. 2. Metabolism of PBDEs by liver enzymes to hydroxyl metabolites

The study has toxicological relevance because several of the hydroxy metabolites of BDE-47 and BDE-99 identified in our study have greater biological activity than the parent compounds. Information generated from studies such as this one could help to determine how well a wildlife species is able to cope with contaminant exposure.