Making a living as a rock musician can be hard (unless you are a star!): today your band plays here, tomorrow your band plays there… always on tour playing at clubs to earn some money. Animal migrations work actually like that: animals move from place to place depending on the availability of resources. Also, when you play in a band your instrument travels with you. Viruses travel like that too: they are tightly attached to an animal host to move from one place to another. Finally, the band’s guitarist can sell to another musician one of his/her guitars and/or buy a guitar from other musicians. Viruses can also “jump” from one host to another using different transmission strategies, e.g., body fluids.

Filoviruses, such as Ebola, are particularly lethal. Sad reminders of that are the ongoing Congo epidemic, with a human death toll above 2,000, or the 2014 West African epidemic which killed roughly 11,000 humans. In this context, developing tools with predictive capabilities is all-important. Most of those tools have focused on the progression of the disease, i.e., how the guitar jumps from musician to musician. We, instead, decided to focus on the ecological dimension of the problem and follow the host, i.e., we followed the tour of the rock band. There is general agreement on the fact that bats are the main reservoir of Ebola. Consequently, their natural migrations transport the virus across the continent. By investigating the main drivers of these migrations, we proposed a framework to predict, rather than the progression of the disease, the locations/times where/when the next outbreak can occur. 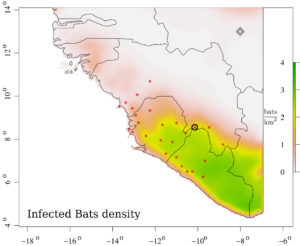 Fig. 1. The zoonotic niche and the outbreak of the 2014 Ebola epidemic in West Africa. The confirmed cases of Ebola virus infection in humans in Sierra-Leone, Liberia, and Guinea in December 2013 are indicated by means of red squares. Adapted from Fiorillo et al. (2018).

To begin, we performed an analysis of the parameters that determine the likelihood of finding bats. To this purpose, we first found out the location of bats based on field studies and other databases (we included also information on the regions where environmental conditions certainly challenge the survival of bats, e.g., Sahara Desert). Second, we used satellite data to obtain information about environmental/geographical conditions at those locations (e.g., temperature). By using statistical tools, we developed a model to predict the maximum density of bats as a function of a set of parameters: elevation, precipitation, temperature, type of land, and vegetation.

In parallel, we developed a mathematical model that describes the infection state of the bats and their migrations. The model took also into account how resources are modulated by the presence of bats. By combining this model with the statistical analysis mentioned above, we predicted where and when high densities of infected bats are located, thus allowing us to assess the areas at higher risk of Ebola outbreaks. Moreover, since some parameters are subjected to variability, we performed estimations of the confidence bounds of our predictions.

To test our model, we compared our results to the ground truth about the 2014 Ebola epidemic and….bingo! In Figure 1, the black circle indicates the first recorded case, with each red dot indicating a recorded case of Ebola. The infected bat density, provided by our model shows a high number of infected bats in the regions where actual Ebola cases were found. These results highlight the importance of considering the feedback between the ecology and the environment in zoonoses (i.e. diseases that affect humans with an animal origin).

Currently, our team is working to develop the model further by investigating the connection linking socioeconomic factors and human behavior that cause the risk infection to rise (e.g., how likely it is that a guitar is sold  to another musician). Altogether, we expect that our methodology can be employed as a predictive tool and help to create preventive strategies in the context of zoonotic diseases even beyond Ebola.