Predictive sensing: the role of motor signals in sensory processing

The brain receives sensory information and uses it to build a representation of our environment and guide our behaviors. However, these voluntary actions in turn also lead to stimulation of our sensory systems. Accordingly, our sensory systems are stimulated by 2 broad categories of sensory inputs: 1) unexpected ones caused by external events termed ‘exafference’ and 2) expected ones caused by our own actions termed ‘reafference’ (Fig. 1). In everyday life, the brain must distinguish between sensory exafference and reafference to correctly interpret sensory signals to ensure perceptual stability and generate accurate behavior. This review1 summarizes recent findings, which have established how the brain makes the distinction between sensory reafference and exafference at the level of neural circuits. 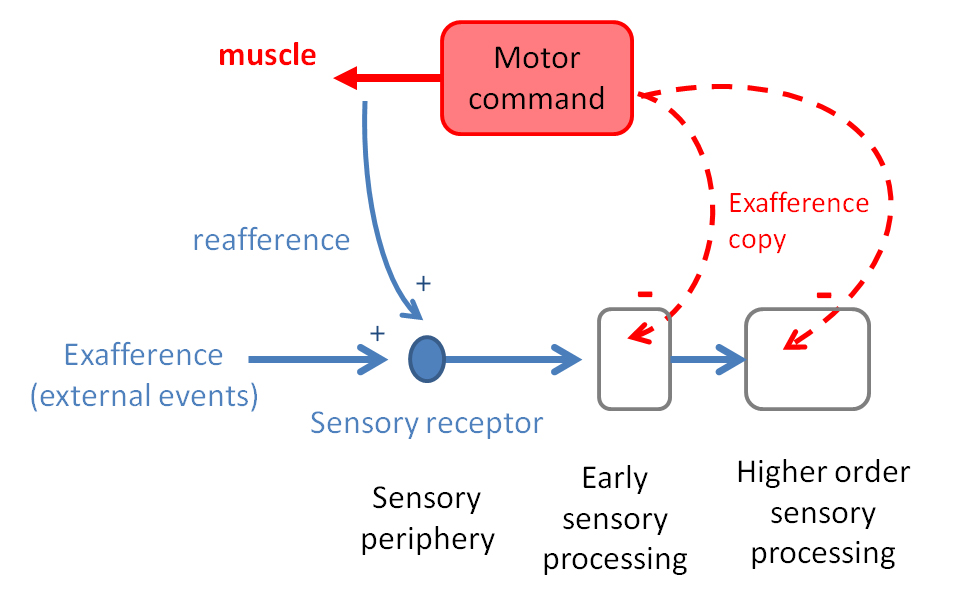 Fig. 1. Our sensors are stimulated both by our own actions (called”reafference”) and by external events ( called ”exafference”). During voluntary actions, Motor signals are sent to our muscles to generate the desired action as well as to sensory areas to suppress self-generated sensory stimulation.

In the vestibular, auditory, and somatosensory systems, motor-related inputs significantly suppress reafferent information at early stages of central sensory processing. For example, the vestibular system senses the motion of the head in space. Both reafferent and exafferent signals are then encoded by the primary afferents in the VIIIth nerve. However, neurons at the next stage of vestibular processing involved in the perception of self-motion and control of balance preferentially encode sensory exafference. In turn, vestibular reafference is also then suppressed in ascending pathways such as the vestibular thalamocortical-cortical pathways. The integration of motor with sensory signals thus underlies predictive sensing required for perceptual stability and appropriate recruitment of vestibular-spinal reflexes.

The cerebellum plays a key role in cancellation of vestibular reafference. It computes an internal model of the predicted sensory consequences of the behavior that is then used to suppress incoming sensory information. This cerebellar-based mechanism ensures that vestibular reafference cancellation only occurs if sensory feedback from muscle proprioceptors matches that expected based on the motor command generated to move the head. Accordingly, when head movement is disrupted and proprioceptive feedback doesn’t correspond to what is expected, the vestibular signals are not suppressed. Furthermore, the brain can learn to change its expectation of what the feedback should be. For example, work by our laboratory has shown that the brain quickly learns to change its expectation, in response to experimentally induced changes in head motion, so it can once again appropriately suppress self-generated head motion signals.

Additionally, studies of the auditory, somatosensory, and visual systems have demonstrated that motor-related inputs also suppress reafferent sensory responses at the level of cortex. For example, in the visual system motor-related inputs primarily suppress reafferent responses at higher levels of sensory processing – specifically in the visual cortex. Such cancellation is required to resolve two challenges that arise in building a stable visual representation of our environment during eye movements. First, as the eye moves, it causes a blur on our retina (just like a camera takes blurry pictures if it is moving). To resolve this issue, motor signals are sent to visual areas to make them less sensitive to visual information during the eye movement. Second, objects in the visual world move relative to our retina during eye movements. To resolve this issue, motor signals containing information about the size and direction of the eye movement are sent to the cerebral cortex, thereby enabling the brain to update the expected location of an object ensuring a stable representation of the world.

In summary, the strategy of integrating motor and sensory information during voluntary behavior is a general feature of sensory processing. It provides the neural flexibility required to continuously calibrate relationships between motor signals and the resultant sensory feedback. This computation necessary for learning new tasks as well as to create and maintain our subjective awareness that we control our actions and the resulting sensory stimulation.