Mercury is a heavy metal with well-established toxicity that exists in several forms in the environment including elemental, organic and inorganic mercury (Hg), which is the metal form of interest in this study. In addition to toxic effects exerted on the nervous and excretory systems, Hg also adversely affects the cardiovascular system. Inorganic cadmium (Cd) is also a toxic heavy metal pollutant that is accumulating in the environment due to industrialization. 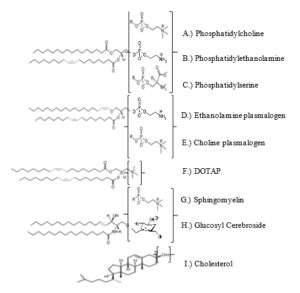 Fig. 1. Chemical structures of the phospholipids used in this study.

Because of the significant health impact of these metals, a better understanding of metal-induced effects on potential targets in biological membranes is required and much less is known about metal-lipid interactions. Hg and Cd are strongly affected by the ionic strength since chloride will induce changes in the species of metal present in solution. The higher affinity of Hg for chloride compared to Cd leads to the formation of predominantly neutral and negatively charged complexes including HgCl2, HgCl3– and HgCl42- whereas Cd forms predominantly positively charged complexes (Cd2+ and CdCl+). Hence, the objective of this study was to screen the interactions of Hg and Cd with neutral, negative, and positively charged lipids under physiologically relevant chloride and pH conditions of 100 mM NaCl pH 7.4. This difference in the chemical speciation is expected to impact electrostatically driven metal-lipid interactions as Cd will interact with negatively charged lipids while Hg is predicted to interact with positively charged lipids.

Experiments also focused on Hg-plasmalogen interactions that resulted in the cleavage of the lipid into two fragments. Plasmalogens are enriched in Brain, Heart and Red blood cell membranes and their depletion is associated with Alzheimer’s, Down syndrome and Zellweger syndrome. While the Hg-plasmalogen interaction is known from the literature its impact on the size and fluidity of lipid membranes is not understood.

To study metal-lipid interactions, multi-layered lipid structures were passed through filters with defined pore sizes to produce single bilayers called large unilamellar vesicles (LUVs) of ~100-nm in diameter. Next, we utilized the fluorescent molecule Laurdan which incorporates into the LUVs and acts as a polarity sensor. Laurdan fluoresces more at 440 nm in tightly packed gel phase bilayers, where it is less accessible to water, while increased fluorescence is observed at 490 nm in the less tightly packed liquid-crystalline phase. These fluorescence intensity changes are related to membrane fluidity and were quantified using the generalized polarization (GP) equation.

GP was used to monitor fluidity changes versus temperature and study the effects of Hg and Cd on the fluidity of different lipid models mimicking brain myelin (See Figure 1 for lipid structures). 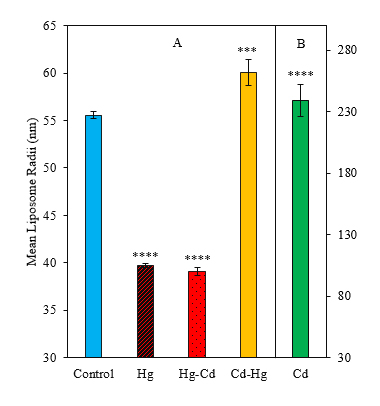 Dynamic light scattering was then used to measure the average size of LUVs in the absence and presence of Hg and Cd.

Our results showed that Hg targeted all lipid systems containing plasmalogens inducing membrane rigidity/tighter packing. Calorimetry data showed that Hg bound to plasmalogens with dissociation constants between 4-30 µM. Negative Hg species also targeted positively charged lipids inducing rigidity and aggregation of LUVs. Interestingly when plasmalogen Hg targets were present with negative Cd lipid targets, the results strongly depend on the presence of both metals and the order of metal addition to the membranes. While the Hg-induced breakdown of plasmalogens also resulted in a breakdown of the LUV structure, Cd- interactions with negative lipid resulted in aggregation. However, when Hg was added to plasmalogen/negative lipid LUVs first, Cd-induced aggregation was blocked while if Cd was added first, Hg-induced LUV breakdown was blocked (Fig. 2). These data demonstrate significant lipid specific metal-induced effects on membrane structure and function that should be considered for a better understanding of their toxicology.