Identifying neural networks that infer safety versus danger is of great interest in the scientific field. Fear generalization reduces the chances of an animal’s survival and leads to psychiatric diseases, such as post-traumatic stress disorders and phobias in humans.

In order to create a negative emotional experience, animals underwent a fear conditioning through which a pure tone (CS) acquired a negative content with its concomitant association with a footshock (US). Here we demonstrated that discriminator animals, able to differentiate a new neutral tone from the previous treating tone (CS), showed a synchronization in the local field potentials recorded between the prefrontal (PF) and primary auditory (Te1) cortices, specifically in slow gamma frequencies. 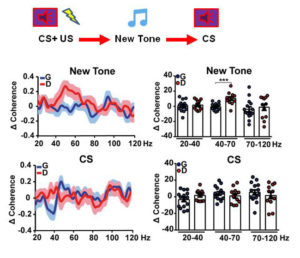 The aforementioned regions are directly connected as we proved through retrotracers injection in the prefrontal region that evidenced labeled neurons in the auditory cortex. The cortical connectivity,  established at the initial 500ms of the newt tone evaluation as neutral in discriminators, preceded and predicted the final behavioral outcome of the animals. This communication was absent in animals generalizing fear to the new tone and in both discriminator and generalizer animals during the presentation of the aversive tone, correctly addressed as dangerous. The prefrontal-auditory dialogue is specifically required during correct threat assessment since it is not engaged when an animal is evaluating a completely different new stimulus as neutral, showing low fear responses: discriminator animals presented with an harmless olfactory cues did not show neither freezing behavior nor cortico-cortical coherence during its evaluation. In a subsequent line of experiments we also proved that animals that did not experienced the threatening tone (naïve) did not show any change in prefrontal-auditory synchrony during the evaluation of the same neutral tone, evaluated as so, thereby demonstrating that this communication is dynamically engaged only after fear learning. The change in the synchrony was also sustained by an increase in the power of the local activity of the PF and Te1 cortices and by multi-units recordings aimed at evidencing a specific dialogue between the regions in exams that was not influenced by neighboring sites. Moreover generalizer animals to the new tone, that were able to discriminated an another different new tone (a white noise), showed the restored PF-Te1 coherence.

This communication does not simply take part to the complex fear discrimination process but rather it seems necessary for the correct evaluation of new stimuli. The optogenetic inhibition of this, led to an immediate switch to a fear response for discriminator animals. 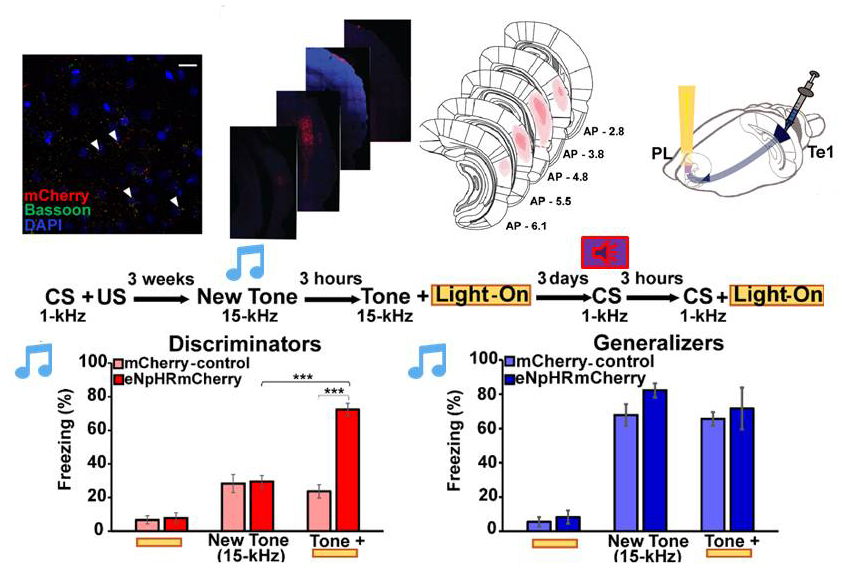 For such reason, to the best of our knowledge, this study is the first to demonstrate a specific and exclusive cortico-cortical dialogue occurring between sensory and prefrontal areas representing a key node for fear-discrimination processes.