Common environmental factors such as extreme ambient temperatures and air pollution are known to increase the risk of many serious health problems including stroke, heart attack, asthma, and lung cancer. More recently, there is also evidence suggesting that these exposures also have unfavorable effects on pregnancy but it is unclear whether they influence the risk of having a small baby. The purpose of this study was to determine whether mothers who were exposed to extreme temperature and air pollution during pregnancy had any difference in risk for having a baby who was small for gestational age (SGA) or term low birthweight (tLBW). SGA infants are the smallest 10% of babies born during the same week of pregnancy and tLBW refers to babies who are full term but weigh less than 2500 grams, or about 5.5 pounds. 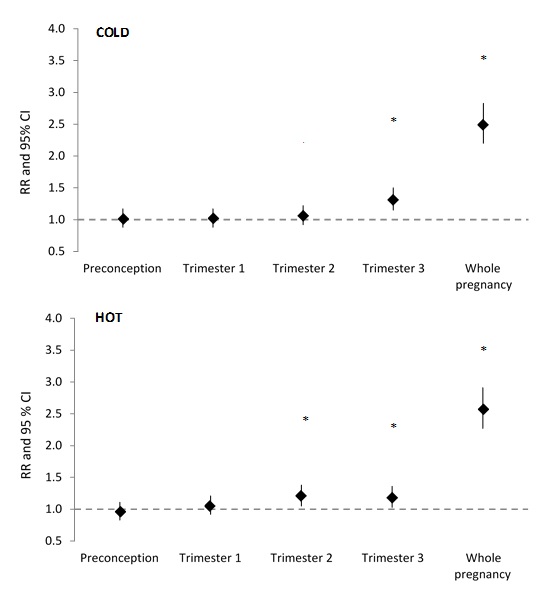 We linked the medical records of 220,572 singleton births born between 2002 and 2008 across 12 US sites to local temperature and air pollution levels during various pregnancy windows (e.g., each trimester and whole-pregnancy averages). We categorized the temperature exposures into three categories based on area-specific temperature distributions: hot (>95th percentile) and cold (<5th percentile), and mild (5th-95thpercentile). For example, women who were exposed to the top 5 percent of the temperature distribution within their local area are considered as being exposed to ‘hot’ temperature. This helps take into account regional acclimation, where ‘hot’ is defined as hot relative to the usual environment (i.e., 80 degree is perceived differently depending on where a woman lives). Air pollution was kept as a continuous variable without categorization.

Air pollutants generally were not associated with SGA nor tLBW, but we saw that preconception elemental carbon was associated with a 4% increase in SGA while dust particles increased tLBW risk by 10% for each interquartile increase in exposure (i.e., the 75th percentile compared to the 25th percentile). Fine particle exposures in the second trimester and whole pregnancy also appeared to be related to tLBW risk.

Our findings suggest prenatal exposures to extreme ambient temperature relative to usual environment may increase tLBW risk. This seems to be particularly important for chronic, whole pregnancy exposures. Even though our study does not provide a causal link, it is important for pregnant women to avoid outdoor activities when the temperature is too hot or cold, or when there are air pollution advisories, similar to the recommendations for people with asthma and other respiratory diseases.

This project was supported by the Intramural Research Program of the Eunice Kennedy Shriver National Institute of Child Health and Human Development.