Cardiovascular diseases ( CVDs ) and diabetes ( DM ) are two interrelated groups of diseases that contribute to more than 50 % of death worldwide. Patients with CVDs and / or DM often take multiple medicines which could increase the possibility of medicine-related problems (MRPs). MRPs include any unwanted effects associated with the use of medicines. Unwanted effects could result from using wrong medicine or combination of medicines, wrong dose or modality of intake or known adverse effects. Hospitalisation resulting from MRPs account for up to 10% of the total hospital admissions worldwide. In this respect, certain risk factors contribute to hospitalisation; and are related to the patient or the medicine. 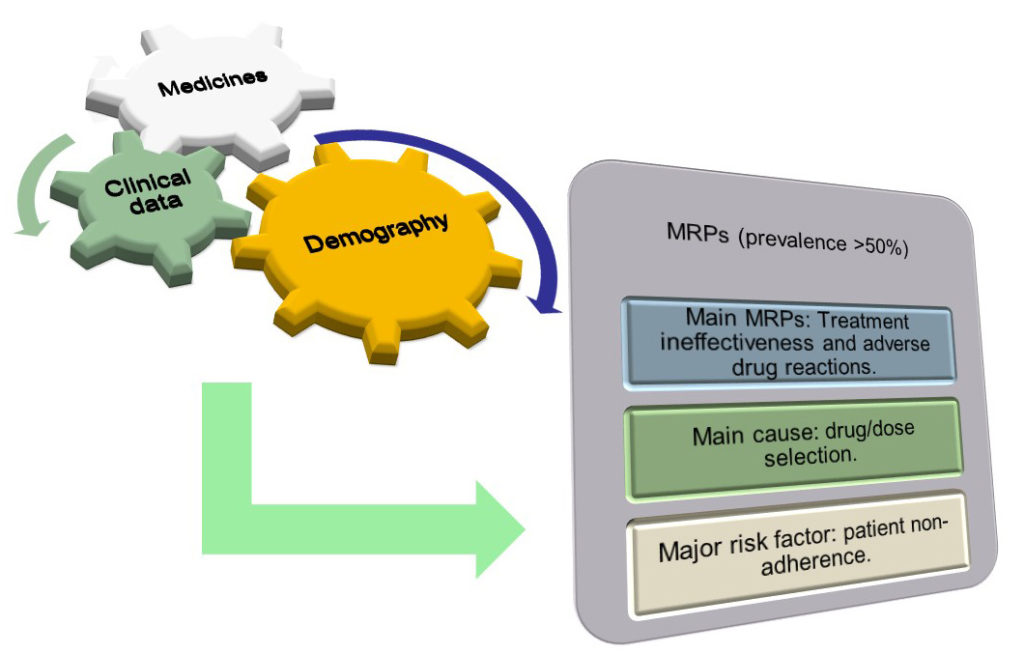 Fig. 1. Main findings of the study.

We conducted a retrospective medical record review study (n = 300) in two hospitals in the UK and Saudi Arabia.  In order to extract the relevant information from medical records, we adopted a data collection tool which was based on the Pharmaceutical Care Network Europe (PCNE) tool (Fig. 1). The extracted information was used in order to detect the (1) MRP type (treatment ineffectiveness, adverse drug reaction, others), (2) MRP cause (medicine selection/form, dose selection, treatment duration, medicine use/administration, patient, logistics), (3) level of harm (no harm, mild, moderate, severe). The results of this study were reviewed by two expert panels (one in each country consisting of a doctor and three pharmacists).

Our study identified 197 (66%) MRPs in the 300 patients as follows: 103 (52.2%) in the UK and 94 (47.7%) in Saudi Arabia. Out of the aforementioned MRPs, 58.7% and 41.5% led to hospitalisation in the UK and Saudi Arabia respectively. The main MRPs encountered were treatment ineffectiveness and adverse drug reactions and accounted for 90.8% and 97.8% of the total MRPs in the UK and Saudi Arabia respectively. Most of the encountered MRPs had low or moderate harm. The leading causes of MRPs were medicine selection, dose selection and patient non-adherence. Some causes were limited to the UK (but not Saudi Arabia) and included: medicine-alcohol interaction, medicine use/administration, medicine form and medicine misuse/abuse.

In relation to the comorbidities associated with MRPs, hypertension and type 2 diabetes mellitus were the most prevalent comorbidities in both countries.  Both conditions require the intake of multiple medicines (i.e. polypharmacy). Subsequently, polypharmacy was the major risk factor associated with MRPs and was reported in 50.9% of the cases in the UK and 40.9% in Saudi Arabia. Additional risk factors identified in the study were: patient non-adherence, impaired liver/kidney functions, smoking and obesity. Yet, some individual risk factors were distinctive between the UK and Saudi Arabia. Hence, six risk factors were reported only in the UK and were: dependent living situation, impaired cognition, anaemia, excessive caffeine intake, family history of CVDs and stress. On the other hand, four risk factors were reported only in Saudi Arabia and comprised: anorexia, depression, epilepsy and smoking history. Likewise, there was a difference in the medicines involved in MRPs in both countries. In this respect, medicines used for CVDs were involved in most of the identified MRPs in the UK and were: antihypertensive, anticoagulants, antiarrhythmic and lipid regulating medicines. On the other hand, antidiabetic medicines were implicated in most MRPs in the KSA.

In summary we found that MRPs represented a major issue and were highly prevalent in both the UK and Saudi Arabia. Most of these MRPs were not severe; yet, this depended on many other factors. These factors were associated with the patients’ lifestyle, condition(s) and medicines that been taken. Therefore, training should be provided for both healthcare providers and patients in order to manage and prevent unnecessary hospitalisation associated with MRPs.