Candida albicans is a commensal yeast of humans and colonizes ≈70% of the human population. It is common for C. albicans to cause self-limiting infections, but severe infections can be life-threatening. Invasive candidiasis occurs in patients with a compromised immune system, such as anti-cancer therapies. Even if antifungal drugs exist, ≈3 million people acquire life-threatening fungal infections every year, 700,000 of which are invasive candidiasis. Despite this, fungi remain underestimated as pathogens. 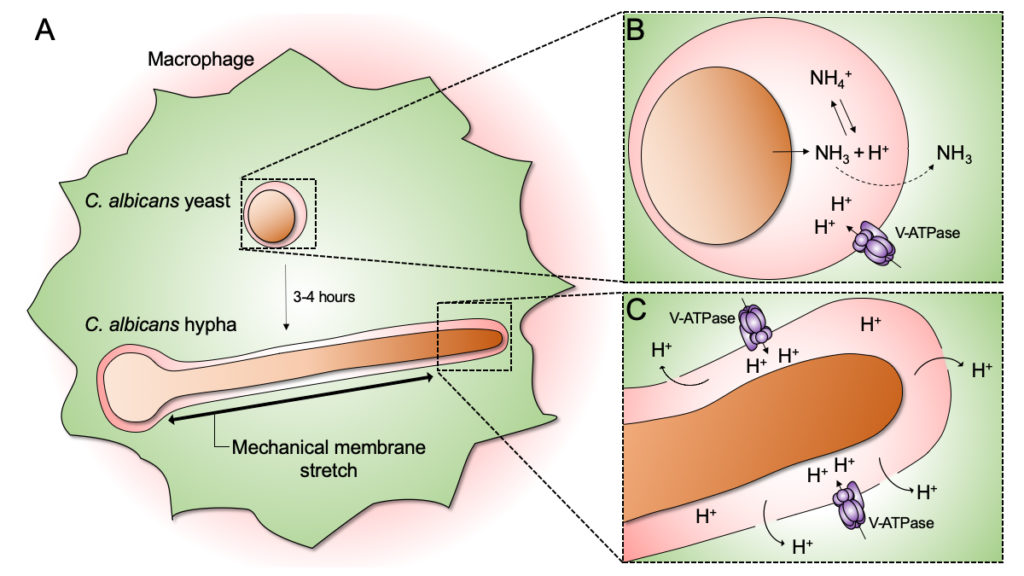 Unlike many other pathogenic microbes, C. albicans is polymorphic and grows as budding yeast or filamentous hypha (Fig. 1A). This switch in morphology, termed yeast-to-hypha transition, occurs when the fungus is confronted by stressful conditions, including contact with immune cells, elevated temperatures, and changes in nutrient availability. Engulfment and destruction of fungi by professional phagocytes (Greek for “cells that eat”) is critical to the innate immune response. One important phagocyte known as “macrophage” is a type of white blood cell patrolling the body. As the name describes (macrophage meaning “large eater”), macrophages can effectively sense and internalize fungi by a process termed phagocytosis. The newly formed phagosome contains the engulfed C. albicans yeast, and thereafter undergoes a series of events termed “phagosome maturation”, where the phagosome acquires a hostile, acidic environment with low nutrient availability. The acidic phagosomal environment is critical to limit fungal growth. Many enzymes inside this fungus-containing phagosome require low pH to function properly. Phagosome acidification is achieved by influx of protons (H+) via pumps named V-ATPases (Fig. 1B). It is currently believed that the yeast-to-hypha transition is inhibited within acidic phagosomes. Consequently, C. albicans is thought to increase the phagosomal pH prior to yeast-to-hypha transition. Thus, the ability of C. albicans to increase pH inside the phagosome is considered crucial for its survival and escape from macrophages.