Progressive multifocal leukoencephalopathy (PML) is a life-threatening demyelinating disease of the central nervous system caused by reactivation of the virus JC (JCV). This condition is triggered by immunosuppression, most frequently associated with AIDS, lymphoprolioferative diseases or immunosuppressive drugs.  Any subject, not previously known to be ill, presenting with PML must be intermediately tested for HIV infection, in most of the occasions this diagnosis being confirmed. However, a diagnostic challenge arises when a patient presenting with PML has a repeatedly negative test for HIV, has no evidence of hematologic neoplasms or is not receiving any immunosuppressive drug. 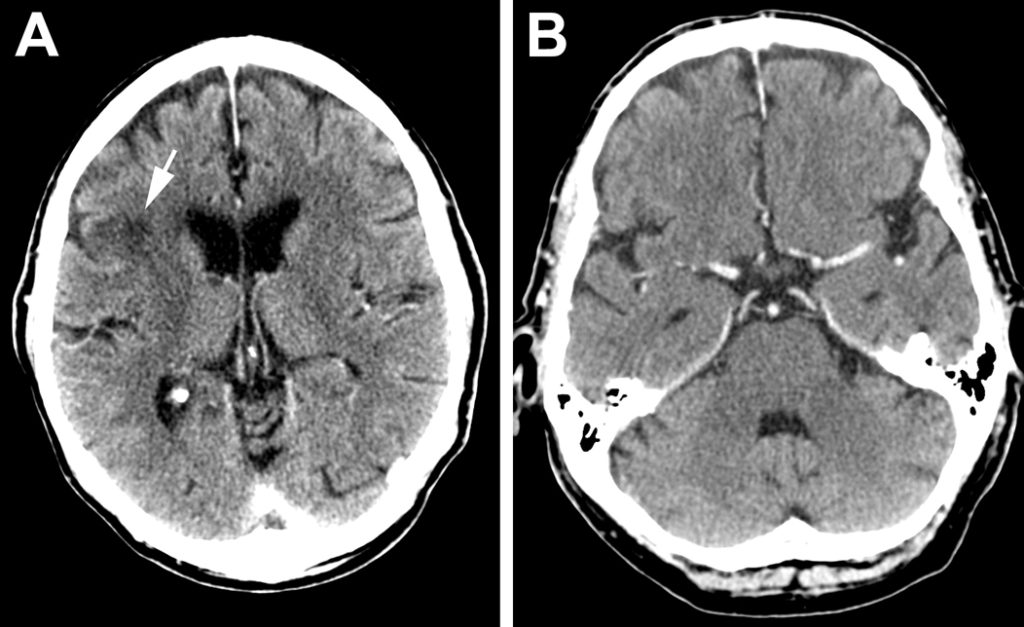 We described such a case in a 72-year-old man who presented with acute onset ataxia and dysarthria. An initial CT scan revealed a non-enhanced hypodense lesion in right frontal subcortical area (Fig. 1), which was initially interpreted as an ischemic stroke. However, within two weeks he underwent rapid deterioration with behavioral changes, cognitive decline, dysphagia and severe truncal and appendicular ataxia. An MRI study showed hyperintense T2/FLAIR white matter lesions with involvement of the subcortical U-fibers in right frontal and parietal lobes and cerebellum (Fig. 2A, B). These lesions had a rim of restricted diffusion, decreased regional blood flow and showed no contrast enhancement (Fig. 2D, C). Considering PML as a potential diagnosis, the diagnostic work-up showed a lymphopenia (800 cells/μL) with 242 CD4+ cells/μL,  130 CD8+ cells/μL, and 348 CD3+ cells/μL. An extensive work-up aimed at discovering the etiology of the immunosuppresion including serological tests for HIV-1 and HIV-2 antibodies, PRC analysis for HIV proviral DNA, tumor markers, systemic and neuronal autoantibodies, body CT scan, and bone marrow biopsy was negative. CSF analysis showed a positive PCR for JCV, confirming a PML.

In this clinical situation a diagnosis of Idiopathic CD4 lymphocytopenia (ICL) was made. This is a syndrome defined by the Centers for Disease Control and Prevention as “a documented absolute CD4 T lymphocyte count of less than 300 cells/cubic millimeter or of less than 20% of total T cells on more than one occasion, no evidence of infection on HIV testing, and the absence of any defined immunodeficiency or therapy associated with depressed levels of CD4+ T cells”. It can be the trigger of many opportunistic infections and, in the last years, a few cases of progressive multifocal leukoencephalopathy (PML) have been described in association with this entity. 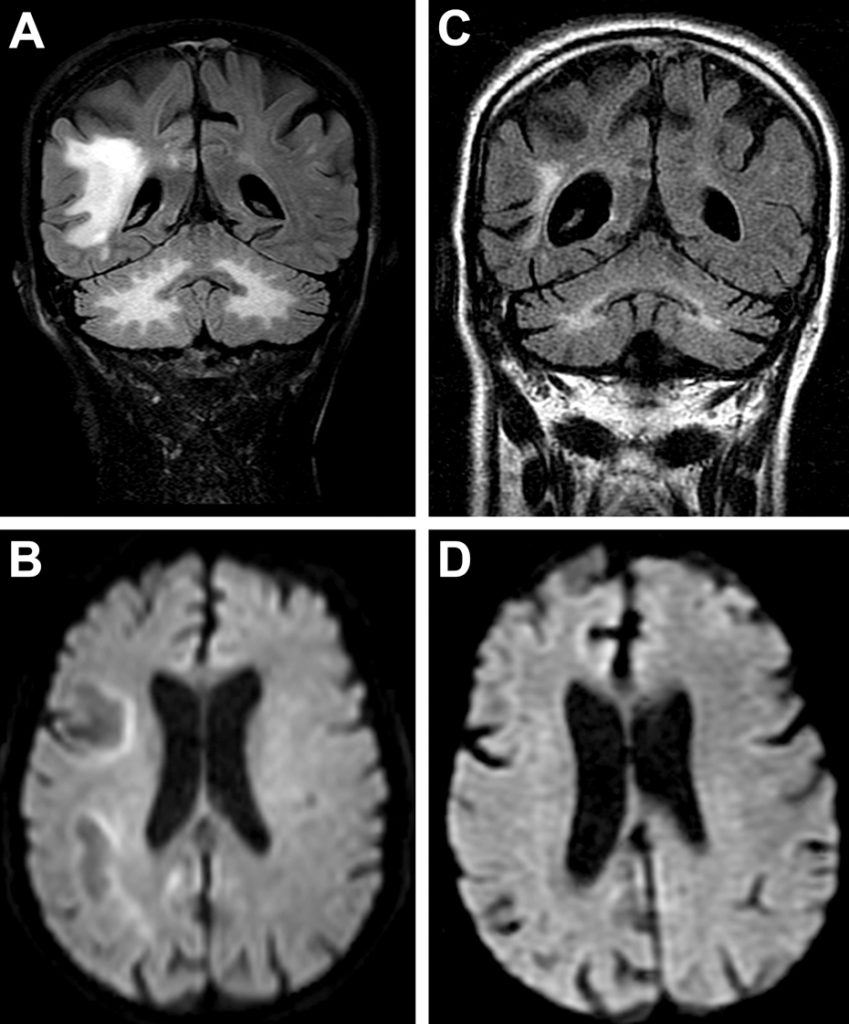 There is not any effective treatment for PML. Several drugs such as cytarabine or cidofovir have been used. In vitro findings have shown an inhibition of JCV entry into the cells with the blockade of the serotonergic receptor 5-hydroxytryptamine receptor 2A (5HT2A). Based on these findings, mirtazapine, a tetracyclic anti-depressant that blocks these receptors, has been used in patients with or without HIV showing some promising results.

The prognosis of PML associated with ICL is not known. Among cases described in our review, three died, three had very severe sequelae, four had improvement, and two had no reported data regarding outcome. Under treatment with mirtazapine, our patient underwent clinical and radiological improvement (Fig. 2E, F), which persisted 34 months after the onset.