Trypanosoma cruzi is the protozoan parasite that causes Chagas disease, an illness that affects approximately 7 million people in Latin America. Nowadays there are only two drugs approved for Chagas treatment, benznidazole and nifurtimox. Both drugs were discovered over 50 years ago, and despite their high efficacy during the acute phase of the disease, they have limited antiparasitic activity in the chronic phase. Besides, these drugs have severe side effects associated that affect patient quality of life and can lead to treatment desertion. Thus, there is still an urgent need for new drugs development. 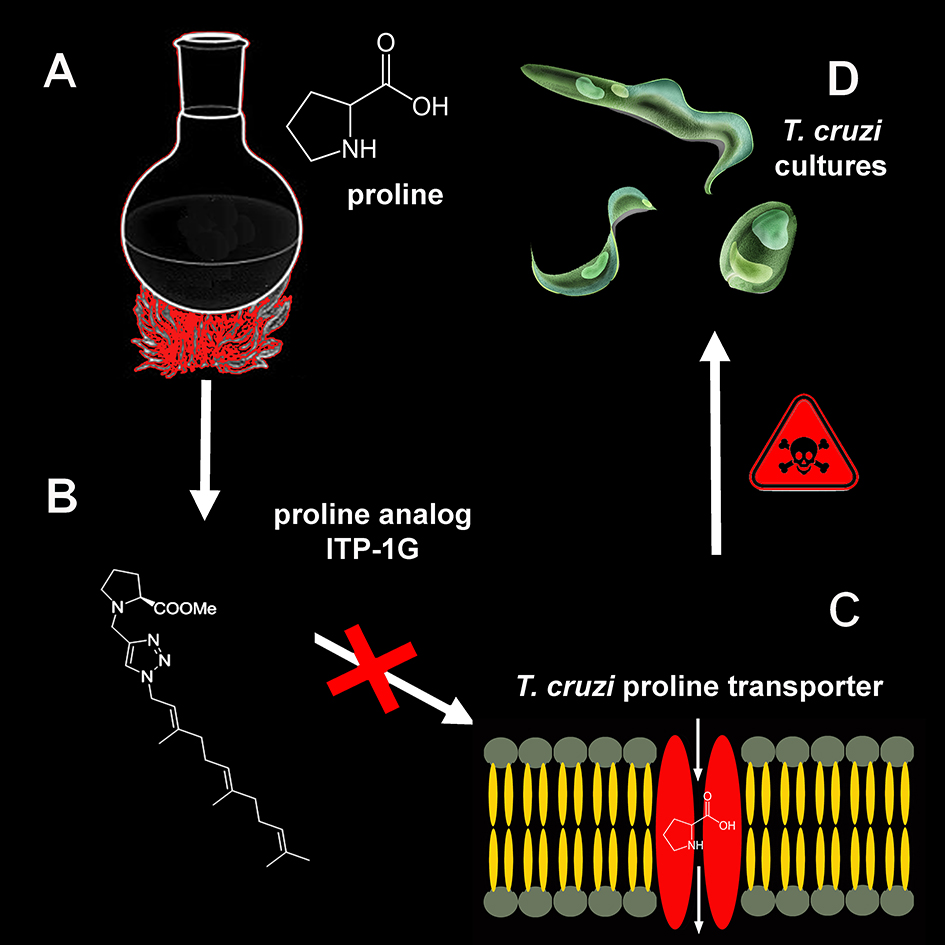 Fig. 1. In Trypanosoma cruzi, the etiological agent of Chagas disease, proline is essential for many biological processes including parasite stage differentiation, host cells infection, resistance to nutritional and oxidative stress and trypanocidal drugs. Using organic synthesis techniques four proline analogues were obtained (a). One of them, named ITP-1G (b) inhibited the T. cruzi proline transporter TcAAAP069 (c) causing the parasites death (d). These results highlight the importance of proline transport processes as therapeutic targets for the development of new drugs for the treatment of Chagas disease.

In addition to its role as a carbon source alternative to glucose, proline sustains host cell invasion and differentiation from intracellular epimastigotes to trypomastigotes. These processes are essential for the establishment of infection and the parasite life cycle progression in the mammalian host, respectively. There is also evidence that proline participates in resistance to nutritional and oxidative stress as well as drug resistance. We previously described the only proline transporter of T. cruzi (TcAAAP069), which belongs to the multigenic family TcAAAP (Amino Acid/Auxin Permeases). This protein family is absent in the mammalian hosts, making this transporter an excellent therapeutic target for Chagas disease.

In this work, four synthetic proline analogues were tested as proline transport inhibitors and trypanocidal agents using a transgenic parasite model that overexpresses the proline transporter. The analogues named ITP-1B and ITP-1G inhibited proline transport mediated through the TcAAAP069 permease in a dose-dependent manner. In fact, the compound ITP-1B produced a non-competitive inhibition on proline transport whilst analogue ITP-1G seemed to act through a mixed inhibition mechanism. ITP-1G was also able to completely inhibit proline intracellular accumulation at a 250-fold lower concentration than proline suggesting that this analogue probably acts on the TcAAAP069 proline permease through an irreversible inhibition mechanism. The compounds ITP-1B, -1D and -1G presented trypanocidal effect on T. cruzi epimastigotes with IC50 (drug concentration that kills 50% of the parasites) values between 40 and 60 µM, a similar range of action reported for benznidazole in many different T. cruzi strains. However, only ITP-1G trypanocidal activity was related with its inhibitory effect on TcAAAP069 proline transporter. Moreover, the addition of only 2 µM ITP-1G caused a 96% decrease in metacyclogenesis, which is the passage from epimastigotes to metacyclic trypomastigotes, an essential step in the parasite life cycle in the insect vector. The putative binding of ITP-1G to TcAAAP069 was also predicted by in silico molecular docking techniques suggesting that the stability of the ITP-1G-TcAAAP069 complex is higher than the stability of the complex formed with the natural substrate. These results suggest that the analogue ITP-1G is a promising trypanocidal drug since it presented the higher inhibition effects on proline transport and parasite growth, completely abolished the increment in intracellular proline levels and also effectively inhibited metacyclogenesis.