Dopamine, often referred as “the happiness hormone”, is one of the most prominent messenger molecules in the human brain. It is a precursor of noradrenaline and adrenaline, which are neurotransmitters as well. Most people heard about dopamine in connection with pleasure, love and joy, due to its participation in our reward system. Despite this it is also a key player in cognitive processes e.g. working memory and learning or voluntary movements. Along with this it participates also in several unpleasing conditions like brain diseases such as Parkinson´s disease or schizophrenia to list only a few. 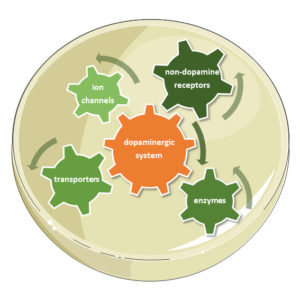 Our brain is a network of billions of nerve cells passing signals via neurotransmitters from one to another over the synaptic cleft, thereby controlling our body movements, emotions, cognition and much more. Of course, dopamine is not the only neurotransmitter, there are several different ones like serotonin, histamine or acetylcholine. While each neurotransmitter has its own receptors, its most prominent localizations and specialized effects, their ways to act are closely connected with each other. This forces us to take brain diseases as multifactorial diseases critically determined by disruption of not only one neurotransmitter system and along with that adjustable by more than one target. Dopamine itself has five different receptor subtypes (D1‑D5 receptor) located in different brain regions, involved in different tasks, while having some overlapping participations in brain networking. For example, the dopamine D3 and also the D2 receptors participate in voluntary movements. Besides both dopamine receptors are correlated with cognitive dysfunctions, serving as possible targets in therapy of psychosis. To extend this by other neurotransmitters, serotonin receptors were found to be feasible modulators in psychosis, too. This is why modern antipsychotic drugs target dopamine as well as serotonin receptors, improving pharmacological treatment compared to first antipsychotics mainly targeting dopamine receptors only.

With gaining more information about these complex brain diseases we learn and adapt more sufficient approaches for therapy of these diseases. This is why, in the last decades, it appeared to be more favourable developing so called “multitargeting” drugs rather than following a one-drug-one-target approach. These promiscuous drugs should interact not only with one target, but with a discrete variety of involved (sub)groups of targets positively influencing the disease process. Besides receptors, such targets could also be structures involved in catabolism of neurotransmitters as well as in signalling, like enzymes or channels.

The multitargeting approach shows several therapeutic advantages. On the one hand it is much more pleasant for the patients as they have to take only one drug instead of many. On the other hand, it simplifies the whole process of drug development, especially in case of evaluation of interactions with other drugs or possible side effects. Despite developing new multitargeting drugs, even well-established drugs were retrospectively discovered to have more than one targets, helping to reclassify these drugs in context of multifactorial diseases.

Since the dopamine neurotransmitter system has a prominent role in several neurological diseases, great effort should be made to bring up sufficient dopamine modulating promiscuous drugs.