Promoting myelination as a strategy to rescue depressive-like behavior

All of our activities-e.g. reading, walking, and thinking- are controlled by our brain. The brain is mainly composed of two types of cells, neurons and glial cells, which communicate with each other every second (or millisecond) and allow fast and precise actions even at the simplest level. To communicate, each neuron sends out one long arm-called the axon-which carries messages to the next one. This causes a cascade of signaling that activates the neuronal network responsible for a corresponding behavior. Most axons are wrapped by an insulating lipid-rich layer called myelin, which constitutes the white matter of the brain. Myelin ensures fast transmission speed and protects axons by providing nutritional and metabolic support. Therefore, myelin is essential for maintaining the most basic function of the entire brain. 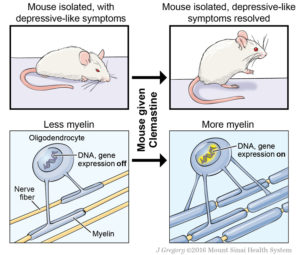 Fig.1. Clemastine successfully reverses depressive-like behavior in adult mice following social isolation. This is associated with enhanced myelination around the nerve fibers (“axons”) in the prefrontal cortex, a critical region involved in cognition. Furthermore, clemastine induces changes in gene expression in the nucleus, to favor myelin gene expression in oligodendrocytes.

In the brain, oligodendrocytes are the only glial cells that produce myelin. Recent studies show that oligodendrocyte development and myelination are highly dynamic processes that continue into adulthood and can be influenced by experience. Altered myelin structure and oligodendrocyte function have been shown to correlate with cognitive and motor deficits. Children suffering severe childhood neglect displayed reduced white matter region and a variety of psychiatric disorders such as attention-deficit/hyperactivity disorder (ADHD). Decreased oligodendrocyte-related gene expression, reduced oligodendrocyte numbers and density as well as abnormal myelin morphology in various brain regions have been detected postmortem in human subjects with major depressive disorder, schizophrenia and bipolar disorder. Patients with neurological disorders affecting white matter, such as multiple sclerosis (MS), often display a high degree of comorbidity with psychiatric symptoms, including depression, and display similar patterns of dysregulation in gene expression profiles. Recent studies using animal models have shown a clear alteration of myelination and oligodendrocyte function in response to stressful stimuli. Social isolation in mice either during the critical period of adolescence or in the adulthood resulted in reduced social interaction, a sign of depressive-like behavior, which are associated with changes in oligodendrocyte gene expression, morphology and myelin thickness in the prefrontal cortex, a critical region involved in cognition. Collectively, these data suggest a potential causal effect of oligodendrocyte dysfunction and myelin deficits in neuropsychiatric disorders.

In contrast, whether enhancing myelination and oligodendrocyte development is beneficial to treat depressive-like behavior has yet to be explored. We set out to ask this simple question using our established animal model of social isolation, and a highly potent compound in promoting myelination identified from a recent drug screen-clemastine. Adult mice undergoing prolonged social isolation (i.e. eight weeks) display depressive-like behavior and impaired myelination in the prefrontal cortex. Following the development of depressive-like behavior, while the mice continued to be housed in isolation, we orally administered clemastine, a Food and Drug Administration-approved antimuscarinic compound for two weeks, and examined the effect of clemastine at the behavioral, cellular and molecular levels. Clemastine successfully reversed social avoidance behavior in socially isolated mice, an effect similar to social reintegration as we previously shown. Clemastine also resulted in enhanced myelination in the prefrontal cortex, increased myelin protein expression and increased numbers of mature oligodendrocyte. Furthermore, clemastine induced nuclear structural changes in oligodendrocytes which favor myelin gene expression.

Depression is a prevalent mental disorder affecting approximately 35 million adults in the United States. However, less than 50% of patients with depression respond to current treatments, highlighting the need for strategies targeting novel mechanisms. Our data suggest enhancing myelination may be a potential strategy for reversing depressive-like social behavior. This new insight, into the role of myelination and oligodendrocyte function in modulating emotional behavior, is opening up exciting prospects for research and for designing novel strategies to ameliorate psychiatric symptoms in mental disorders.