Protection from DNA-damage with the natural compound resveratrol

Resveratrol is currently known as a health-beneficial natural compound that is contained in grape skins, red wine, and other natural foods. Recent studies suggest that the compound could elongate the life spans of several organisms through a calorie restriction-like effect. In addition, it may lead to apoptosis or programmed cell death when it is used in higher concentrations. Therefore, resveratrol is also expected to be a leading compound in the development of effective anti-cancer drugs. However, resveratrol given at higher doses may be harmful to normal cells, thus causing serious side effects. We postulated that if resveratrol were used in an appropriate dose as a calorie restriction agent, it might provoke some appropriate responses against DNA damage and prevent cancer cells from proliferating aberrantly. Most scientists who major in molecular and medical biology know that the tumor suppressor protein p53 plays a key role in the regulation of DNA repair systems. Thus, we focused on the effect of resveratrol on the transcription (a means of copying DNA to produce proteins) of the TP53 gene that encodes the p53 protein. As expected, the compound induced a prominent positive response of the TP53 gene in cells of the human cervical carcinoma cell line HeLa S3. This result suggests that resveratrol can induce TP53 gene expression in some cancer cells. 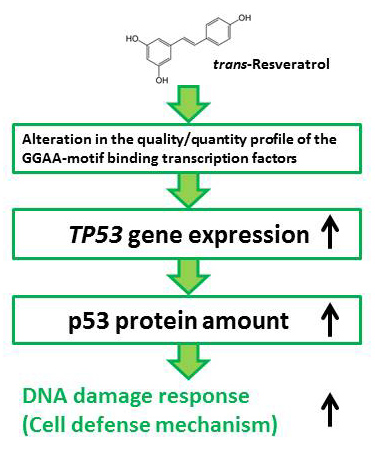 Performing deletion and point mutations on the transcription regulatory (promoter) region of the human TP53 gene, we demonstrated that a duplicated TTCC (complemental sequence of GGAA) motif is of primary importance for the response to resveratrol. The GGAA/TTCC motifs are frequently found in the promoter regions of a number of DNA repair and tumor suppressor protein-encoding genes, including the BRCA1 and RB1 genes related to breast cancer. These observations imply that resveratrol could induce favorable responses against DNA damage at the gene expression level. The effects of resveratrol may be referred to as hormesis (i.e., when an agent is beneficial at low doses but is toxic at higher doses) that is applicable to the treatment of cancers by ameliorating the DNA repair system without leading to cell death. Almost all anti-cancer drugs have been developed to kill cancerous cells, which have been generated or developed from normal cells. Sometimes, these drugs raise serious problems when they cause severe side effects in normal cells in cancer patients. So, new treatments for cancers that up-regulate (or enhance) cell defense mechanisms, such as through p53 production, are required to prevent these debilitating side effects.