Intrinsically disordered proteins (IDPs) or proteins with intrinsically disordered regions (IDRs) are peculiar proteins that escape from the classic structure-function paradigm. The principal feature of these IDPs/IDRs containing proteins is the absence of a unique stable conformation which results in a high structural flexibility or plasticity. Their other features are their ability to bind to many partners, their numerous functions and their resistance to a wide range of physicochemical conditions. Because of this plasticity, IDPs/IDRs containing proteins are advantageous for algae that can cope with extreme conditions of pH, temperature, pressure and light. To survive to such a wide range of conditions, metabolic regulation is essential. IDPs and IDRs containing protein are heavily involved in the metabolic regulation, but have been overlooked in photosynthetic algae, in contrast to other kingdoms of Life. 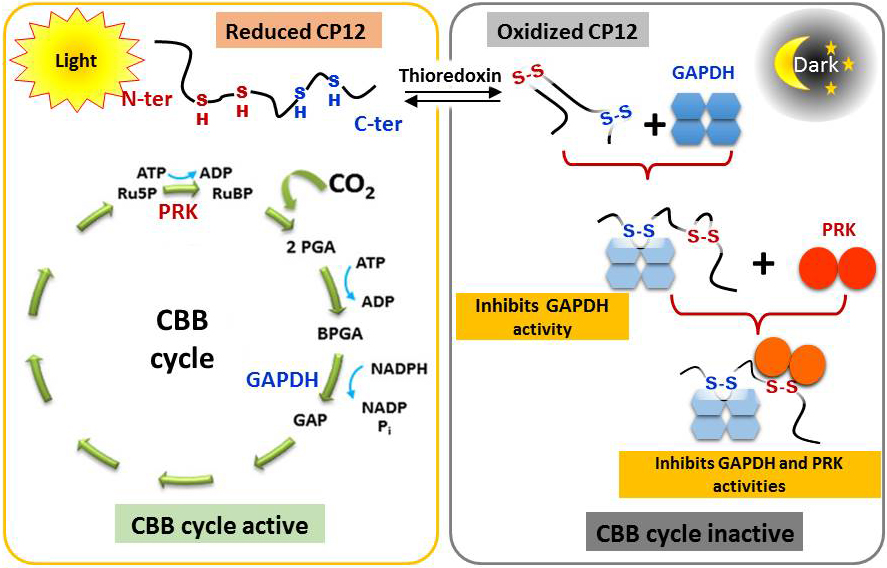 Fig. 1. Simplified scheme of the CBB cycle and the role of CP12 under dark (oxidized conditions) and under light (reduced conditions). PRK and GAPDH stand for phosphoribulokinase and glyceraldehyde-3-phosphate dehydrogenase, respectively.

One of the few well-studied IDP from algae is a chloroplast protein CP12 that is involved in the regulation of CO2 assimilation. It possesses a classic feature of IDP: it is the hub for the assembly of a complex involving two enzymes of the Calvin Benson Bassham (CBB) cycle, the phosphoribulokinase (PRK) and the glyceraldehyde-3-phosphate dehydrogenase (GAPDH). The association-dissociation of this complex is regulated through the redox state of two cysteine pairs of CP12 (Fig. 1) which is accompanied by a structural transition. In the dark, CP12 is oxidized, two disulphide bridges are formed, CP12 becomes partially folded, it has a high affinity for GAPDH and PRK, and the complex forms. When embedded in the complex, these enzymes are inactive. In the light, CP12 is reduced and fully disordered, and the complex dissociates. CP12 is thus a conditionally disordered protein, the structural transitions of which regulate the two enzymes activity.

Another well-studied IDP is the essential pyrenoid component 1 (EPYC1), one of the major components of the pyrenoid, a chloroplastic membraneless compartment that concentrates locally proteins involved in carbon fixation. Phase separation can be reconstituted in-vitro with appropriate concentration ratios of EPYC1 and ribulose-1, 5-bisphosphate carboxylase/oxygenase (RuBisCO). In these liquid-liquid phase separated droplets, EPYC1 remains intrinsically disordered. EPYC1 is thus a representant of a growing class of IDP that are “linker” or “solvent” for proteins in water excluded droplets.

Carbon fixation involves enzymes that contain IDRs, such as the RuBisCO activase in Plantae, or CbbX in purple bacteria that reactivate inhibited RuBisCO. Another example is the adenylate kinase (ADK3) in green algae that maintains the energetic balance in cellular compartments. The same IDRs extension as that of ADK3 is present in some isoforms of GAPDH, and these have a high homology with the CP12 C-terminus. These IDRs confer redox-dependent regulation of GAPDH, as well as thermal resistance to GAPDH and ADK3.

Molecular chaperones involved in maintaining proteostasis also contain IDRs. In green algae, the heat shock protein (HSP) of 33 kDa is a disordered protein with three cysteine residues and is highly expressed under oxidative stress. HSP70 and HSP90 also contain long disordered extensions that may be involved in substrate recognition.

The extent of proteins with disordered regions is yet to be defined, and a global search for IDPs in Chlamydomonas reinhardtii indicates that many other enzymes contain long IDRs. Some are linkers between two functional domains, such as in the dihydrolipoamide succinyltransferase fused to the oxoglutarate dehydrogenase E2 component. Bridging two enzymes in a unique protein by a disorder linker is a fourth key function of IDP, providing functional advantage.

To conclude there is a wide distribution of IDPs in algae, only few are under investigation, and the scope of IDP functions in algae needs to be investigated further in the future.