Psoriasis, more than a skin disease? The involvement of gut microbes

Psoriasis, is a chronic inflammatory skin disease with a high prevalence, of which the exact cause is unknown. Genetic, immunologic and environmental factors all are involved. Psoriasis and Inflammatory Bowel Disease, including Crohn’s Disease and Ulcerative Colitis, are more often seen concurrent in one patient than what would be expected by epidemiology. Psoriasis and IBD share several similarities in genetic and immunologic factors. The involvement of the gut microbiome in IBD has now been recognized by the experts in the field. The microbiome is the collection of all the microbes on our body. 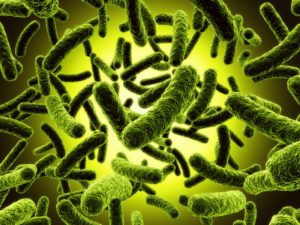 The balance between the good microbes and the harmful microbes seems to be of tremendous importance in human health and disease.  It is known that IBD patients harbour an altered gut microbiome characterised by a depletion of Faecalibacterium prausnitzii and increase of Escherichia coli. F. prausnitzii is a protective gut bacterium which has several anti-inflammatory and anti-carcinogenic properties. At present, it is unclear whether a similar gut microbiome trend can be identified in IBD-associated skin disorders such as psoriasis. We therefore investigated the F. prausnitzii and E. coli abundance in psoriasis, with and without concurrent IBD. Using quantitative polymerase chain reaction , we compared the F. prausnitzii and E. coli abundances in faecal samples from healthy controls [n = 33] with samples from patients with psoriasis [n = 29], IBD [n = 31], and concomitant IBD and psoriasis [n = 13]. We found that psoriasis patients had a similar abundance of F. prausnitzii in their stool than healthy controls [p < 0.001], which was similar to IBD patients. Together with the reduced F. prausnitzii levels, the psoriasis patients had a significantly higher abundance of E. coli. It was apparent that patients with concomitant IBD and psoriasis had the greatest decrease of  F. prausnitzii and increase of E. coli.

We also investigated the presence of these bacteria in Hidradenitis Suppurativa (HS), another disabling chronic inflammatory skin disorder, also related to IBD. In HS, no significant alterations of these bacteria was demonstrated. The study demonstrates, for the first time, an IBD-like decrease of F. prausnitzii together with an increase of E.coli in psoriasis, supporting the presence of a gut-microbiome-skin axis in psoriasis and IBD. Psoriasis is presented as a skin disease, but the skin might function as a mirror of the gut. In the future, new microbiological therapeutic venues might become available for dermatological comorbidity, such as psoriasis, in IBD.