Together with voices, faces are the most important source of social information for humans, even prior to birth. What is equally important to know is how the kinds of information we pay most attention to in faces changes as we progress through different developmental stages. For example, in childhood finding your parent in a crowd and detecting variations in their facial expressions are critical skills for your survival. In contrast, as you become an autonomous adolescent, parent faces become less critical for survival and peer faces become the focus of new social goals. To understand how the brain changes to accommodate these demands on the face processing system, researchers Dr. Suzy Scherf (Associate professor of Psychology) and Giorgia Picci (graduate student) at Pennsylvania State University investigated how pubertal development influences the way adolescents actually keep track of faces; especially those of peers. 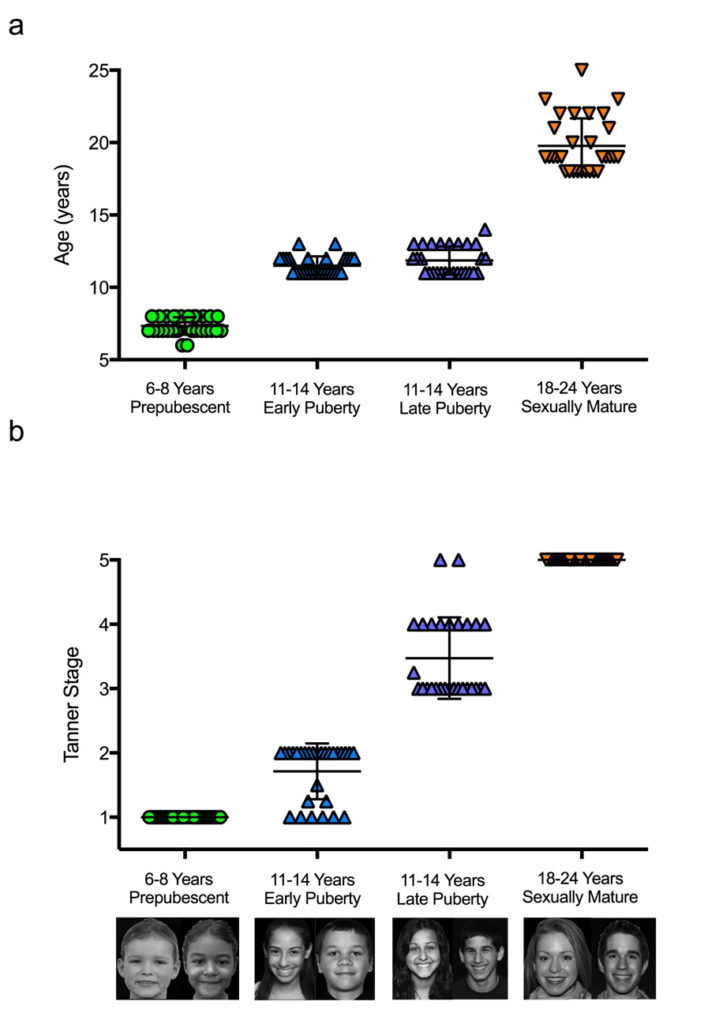 The researchers used an innovative experimental design to test whether participants were better at remembering faces from their own peer/pubertal group, or faces from other groups. Participants were required to remember faces from all four groups. In other words, the faces to be remembered looked just like the research participants in pubertal characteristics (Fig. 1). Because peer relationships become uniquely important during adolescence, Scherf and Picci hypothesized that during and throughout adolescence, teens would be better at remembering other adolescent faces, particularly those from their same pubertal status.

Results from the study show that before puberty, children are best at recognizing adult female faces, not peer faces. The researchers suggest that this pattern reflects children’s need to keep track of their caregivers, who are typically adult females in the United States.

In contrast, as soon as adolescents transition into pubertal development, instead of being biased to remember adult faces, they become excellent at remembering peer faces. Importantly, adolescents are best at remembering peer faces that match their own pubertal status and this continues to be true as they progress through puberty. In other words, as they become more physically mature, their bias for peer faces matches this level of maturity (Fig. 2).

These results suggest that the biological process of puberty changes the way humans see the social world, and in particular, the kinds of faces they pay most attention to. This is some of the first evidence in humans that pubertal development changes face perception. In other words, the influx of pubertal hormones during adolescence likely motivates an increased interest in peers which may, in turn, lead to an enhanced ability to remember peer faces above all other kinds of faces.

Puberty not only induces dramatic physical changes to the body, but also changes how adolescents interact with the increasingly complex social world around them. This dynamic process likely facilitates adolescents’ transition into adult social roles, like increasingly confiding and intimate friendships and romantic relationships with peers.