Purification and characterization of a better-behaved Alzheimer’s disease protein

Alzheimer’s Disease (AD) is an incurable disease that causes memory, reasoning and thinking to deteriorate over time. AD is marked by brain atrophy and plaque-like deposits of a small peptide called amyloid beta (Aß) outside of brain cells and tangles of a protein called tau inside brain cells. Although plaques are no longer considered to cause AD, small aggregates of toxic Aß (oligomers) are currently thought to play a role in the AD process. To study how the Aß peptide may contribute to AD, one needs pure Aß. Unfortunately, the chemically made (synthetic) Aß peptide (Aßsyn) is very difficult to use as it needs extremely strong solvents to dissolve. To overcome this problem, we created a gene for Aß and added a solubility tag consisting of 6 extra lysine amino acids (6K), at the start (N -amino terminal) or the end (C-carboxyl terminal) of Aß to determine which addition made Aß more water soluble. We then engineered bacteria (Esherichia coli) to ‘express’ the gene and produce the modified Aß peptide in large quantities. 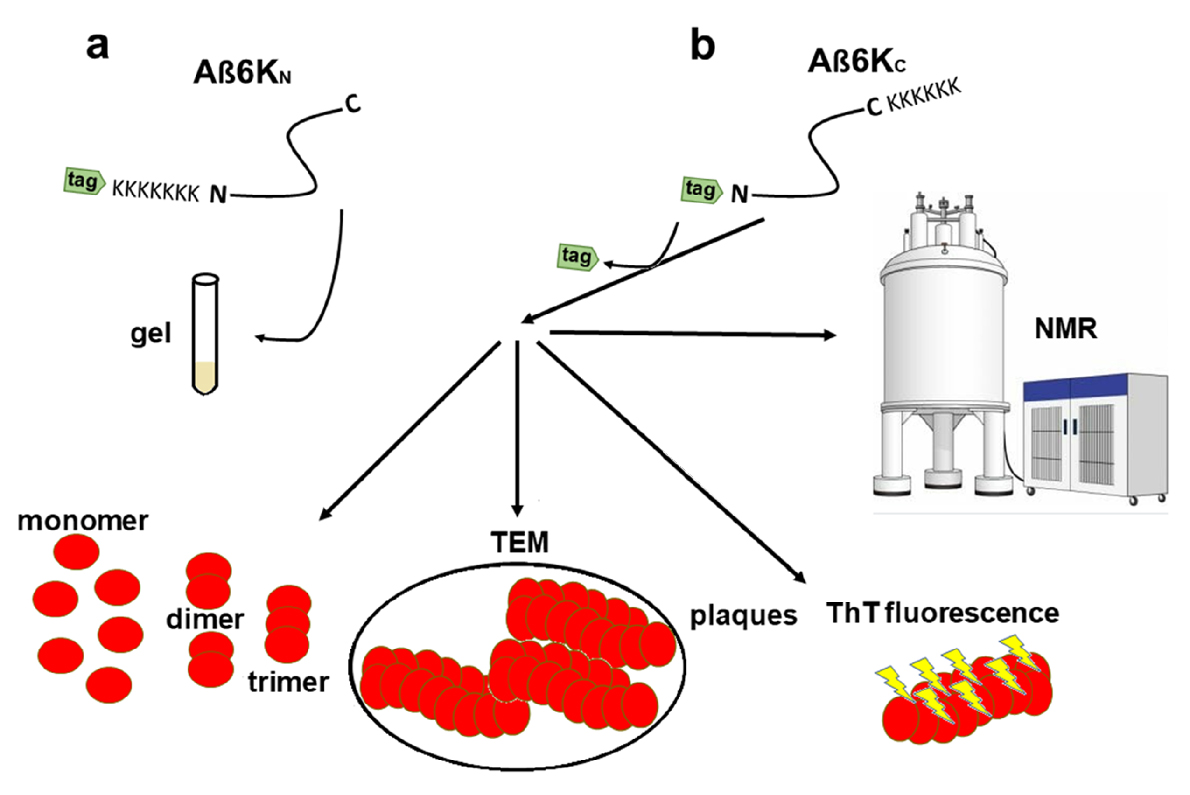 Fig. 1. Generation and characterization of a better behaved Aß peptide. We added a water solubility tag (6 lysines-KKKKKK) to the start (N-amino-terminal) or end (C-carboxyl-terminal) of the Aß peptide to determine which addition increased Aß solubility. (a) Adding KKKKKK to the start of Aß (Aß6KN) caused a gel to form during purification while (b) adding KKKKKK to the end of Aß (Aß6KC) increased expression in bacteria. The Aß6KC was easier to purify. We used three different chromatography steps to purify Aß6KC with the affinity tag (Histidine 6X tag) being removed before the last step. Aß6KC behaved like the synthetic Aß, forming oligomers (dimers, trimers) seen on protein gels, forming plaques that bound thioflavin T (ThT) and fluoresced. It also formed plaques that were seen by transmission electron microscopy (TEM). Aß6KC had the expected sequence and shape of other Aß proteins as seen by nuclear magnetic resonance (NMR) spectroscopy.

When the 6K was added to the start (Aß6KN), the peptide was poorly expressed in bacteria and was difficult to purify. It formed a gel which prevented us from purifying it further. When the 6K tag was added to the end (Aß6KC), the peptide was well expressed and easy to purify. We used three different separation techniques (affinity, ion exchange and reverse phase chromatography) to purify the Aß6KC. We then tested if the Aß6KC behaved similarly to Aßsyn. Using a cross-linking agent, we chemically trapped Aßsyn or Aß6KC oligomers and visualized them on a gel that separates molecules according to size. We expected to see Aßsyn or Aß6KC clusters: dimers, trimers, tetramers and larger. Our Aß6KC aggregated similarly to the Aßsyn except it formed more dimers and trimers. We tested if Aß6KC could form plaques using a marker called thioflavin T (ThT) which binds to plaques and fluoresces when more plaques form. Both Aß6KC and Aßsyn could form plaques that fluoresced with ThT to the same extent and on a similar time frame, with Aß6KC forming plaques a few minutes faster. This was expected as previously reports demonstrated that bacterial purified Aß aggregated faster than Aßsyn. We then examined  Aßsyn and Aß6KC before and after plaque formation by transmission electron microscopy (TEM). The Aß6KC before aggregation was more homogenous (all peptide aggregates being the same size) compared to Aßsyn that had different sized aggregates. After aggregation and plaque formation, Aßsyn plaques were more distinct than the Aß6KC plaques. We then tested if the individual amino acids in Aß6KC were similarly organized and that Aß6KC had the same shape as other Aß using nuclear magnetic resonance (NMR) spectroscopy. For NMR, we need a peptide with specific nitrogen and carbon isotopes that are ‘visible’ in NMR.  We accomplished this by growing the bacteria with isotopically labeled nitrogen (ammonium chloride) and carbon (glucose) and purified the isotopically labeled Aß6KC. The labelled Aß6KC dissolved easily in water and was used in specially designed NMR experiments that allowed us to map the structural and atomic details of this peptide. This well-behaved, water-soluble, conveniently expressible version of Aß forms plaques and can be induced to form oligomers, which are thought to contribute to the AD process. We plan to conduct more NMR experiments with purified oligomers to see how they interact with each other and to discover potential drugs to interrupt this oligomerization process and halt AD progression.