Radiation therapy for nerve pain when cancer spreads to bones

One of the hallmarks of cancer is its ability to spread from the primary site of origin to other places in the body.  Such secondary sites are called “metastases”.  One of the commonest sites for cancer secondaries is the skeleton.  These bone metastases often cause local pain which may require strong pain killers.  Unfortunately, pain killers have many side effects, and may not fully control the pain. 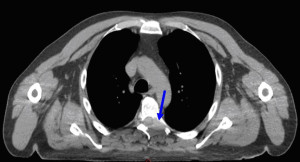 Fig. 1. CT scan of a patient with neuropathic pain radiating around the side of his chest. The arrow points to a bone metastasis in the back part of his spine (grey area) which is compressing the nerve as it exits from the spinal cord to supply that strip of skin.

Radiation therapy or radiotherapy (RT) is the use of high energy radiation to treat cancer (as well as several non-cancerous conditions).  It is very effective in treating painful bone metastases.  Depending on how pain response is defined, 60% to more than 70% of patients benefit.  Perhaps surprisingly, studies have consistently shown that a single moderately large dose (fraction) of RT delivered on one day relieves pain just as well as multiple smaller fractions delivered over several, or many, days.  The side effects from RT for bone metastases are typically mild and temporary, and the same site can usually be re-treated subsequently if needed.

As bone metastases grow, they may expand or spread outside the bone, and press on adjacent structures.  Particularly in the spine region, such growth can compress or irritate nerves as they pass from the spinal cord towards the tissues they supply.  This may give rise to pain radiating along the course of the nerves, so-called “neuropathic pain” (Fig. 1).  It is often associated with unpleasant sensations in the overlying skin such as electric shocks, pins and needles, burning or stabbing.  There may also be altered (increased or decreased) skin sensitivity to touch.  This type of pain is frequently distressing and quite resistant to drug treatment.  For simplicity here, this scenario is referred to as “neuropathic bone pain” (NBP).

However, in addition to being associated with bone metastases, neuropathic pain may also be caused by cancer treatment itself, or by other conditions such as shingles or diabetes.  Overall, 30-40% of cancer patients experiencing pain have a component of neuropathic pain, with NBP being the commonest cause (15-25%).

Only one study has specifically examined whether single fractions are as effective as multiple fractions of RT for NBP.  This study was conducted in Australia, New Zealand and the U.K. between 1996 and 2002 and involved 272 patients, half of whom received a single fraction, the other half 5 fractions.  RT was found to work about as well for NBP as it does for localized bone pain.  However, the single fraction schedule was not proven to be quite as effective.  When considering all 272 patients, pain improved in 53% of those receiving a single fraction compared with 61% receiving 5 fractions.  Restricting the sample to the 234 patients who had full follow-up information available, the corresponding response rates were 61% and 72%, respectively.  It was therefore concluded that 5 fractions may, in general, be preferable.  However, because the differences were relatively small, in some cases, single fractions would also be reasonable e.g. for a debilitated patient where multiple treatment visits would be too much of a burden.

This did raise the question as to whether higher doses of RT delivered in greater than 5 fractions may be more effective for NBP.  A second trial comparing one with 10 fractions was proposed in 2011 in Canada, but for a variety of reasons, the project was abandoned.  Very little has appeared in the literature on this subject since, and the question remains open at this time.

In summary, RT is helpful for painful bone metastases where there is a neuropathic component, but there may be a stronger case for multiple fractions than for localized bone pain.