Radiotherapy for prostate cancer: restrictions for the treatment of recurrent disease

Patients with prostate cancer who are treated with radiotherapy are not always cured. Depending on their pre-treatment risk factors (most importantly the stage of the tumour), they are at risk of recurrent disease. These recurrences often present themselves as a localised process. This means that the recurrent tumour is confined to the prostate, without having spread to other parts of the body. A second treatment directed at the prostate, or even just part of the prostate with the recurrent tumour area, could mean a chance of curation for these patients. Such a procedure is called salvage. A way to perform a salvage procedure is with Iodine-125 brachytherapy. Brachytherapy is a technique with which radiation sources are brought into an organ with catheters. In this case, the radiation sources are Iodine-125 seeds, small metal containers with the radioisotope approximately the size of a grain of rice. These are implanted in the prostate, where they deposit their radiation. Because the radiation sources are implanted in the organs, surrounding structures/organs at risk receive just a small amount of dose. This can have advantages regarding side-effects compared to external beam radiotherapy (or surgery). 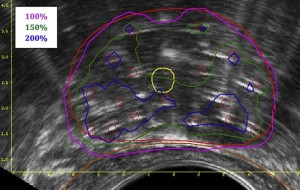 Fig. 1. a transverse image of the prostate on ultrasound during implantation is depicted with the dose distribution in several colours (purple, green and blue). You are looking at a slice of the prostate from below, as if the patient is lying with his legs towards you. The prostate is the red contour, the urethra the yellow and the rectum the brown contour. You can see that the 100% dose line is crossing the rectum.

When patients are treated for a primary tumor with brachytherapy, there are dose constraints for organs at risk which are abided by to prevent the development of late complications. The organs at risk surrounding the prostate are the bladder neck (below which the prostate lies), the urethra (which runs through the prostate) and the rectal wall (which lies behind the prostate). The dose to these organs is kept below certain levels during implantation of Iodine-125 seeds.
However, when patients are re-implanted during a salvage procedure, these dose restrictions become problematic. The organs at risk have already received radiation from the primary treatment and can be damaged. Due to radiation, fibrosis of these organs can occur, making them vulnerable for a second course of radiation. With this is mind, the current study aimed to evaluate which dose levels were acceptable for a salvage Iodine-125 implantation. It was hypothesized that these would need to be set lower than for primary brachytherapy. This study focused on the rectal wall.

We compared a group of 28 patients who underwent a salvage I-125 implantation (Fig. 1.). We divided this group into patients with late severe complication of the rectum for which they needed invasive procedures to resolve. It was shown that all dose parameters used during brachytherapy were lower for patients who did not experience any late severe side-effects. In other words, patients without late severe complication of the rectum received substantially lower doses. With these differences and the use of a statistical technique we found new restrictions which could help prevent these late complications. Indeed, all restrictions were lower than those used for primary brachytherapy, thus sustaining our hypothesis of increased sensitivity of the rectal wall for salvage patients.

Lastly, we showed that with a salvage implantation directed at only the recurrent tumour area, the dose to the rectal wall can be decreased substantially. This can help with abiding by the found restrictions.