Resistance to antibiotics is becoming a worldwide issue mostly related to resistance observed in gram negative bacterial species such as in Enterobacteriaceae (Escherichia coli , Klebsiella pneumoniae) that are the most important source of hospital – and community – acquired infections. Acquired resistance to broad-spectrum cephalosporins (cefotaxime, ceftazidime) in Enterobacteriaceae is mainly due to production specific enzymes, the clavulanic acid (or tazobactam)-inhibited extended-spectrum β-lactamases (ESBLs). Along with carbapanemase producers that hydrolyze in addition the ß-lactams carbapenems, ESBL producers represent the most important resistance trait in Enterobacteriaceae in 2016. In the US, the percentage of healthcare-associated infections caused by ESBL-producing Enterobacteriaceae has been estimated to be 14% and 23% for E. coli and Klebsiella spp., respectively (http://www.cdc.gov/drugresistance/threat-report-2013). Rapid detection of ESBL producers is therefore crucial in order to prevent their dissemination, and for guiding the treatments of infected patients. 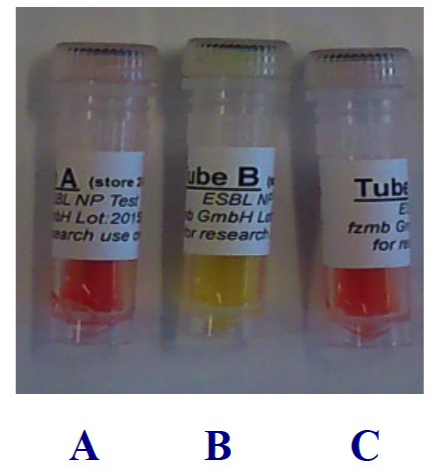 Fig. 1. Identification of an ESBL-producing K. pneumoniae isolate. by using the Rapid ESBL NP test. Tubes A (no antibiotic), tube B (cefotaxime) and tube C (cefotaxime + tazobactam) were inoculated with the bacterial suspension. Hydrolysis of cefotaxime is detected by change of the color of the pH indicator (red to yellow, tube B) while this activity is inhibited by tazobactam addition (no color change, tube C).

Several phenotypic techniques are based on the inhibition of the ESBL activity by clavulanic acid or tazobactam. Those techniques require a preliminary growth step of 24 to 48 hours. Molecular detection of ESBL coding genes is interesting but remains costly, requires expertise, and does not detect all genes encoding enzymes exhibiting ESBL activity. Other techniques such as matrix-assisted laser desorption ionization-time of ﬂight mass spectrometry (MALDI-TOF MS) are being developed but they do require additional material and a significant degree of expertise.

Recently, two rapid diagnostic tests have been developed to identify enterobacterial strains being resistant to broad-spectrum cephalosporins. The Rapid ESBL NP test which is based on the detection of hydrolysis of the cefotaxime β-lactam ring revealing the production of a broad-spectrum ß-lactamase, coupled with a tube containing tazobactam signaling tESBL production. Another test is the β-Lacta test, based on the cleavage of a chromogenic cephalosporin HMRZ-86 (Bio-Rad, Marnes-la-Coquette, France). It is claimed that this test detects any activity that may lead to the hydrolysis of broad-spectrum cephalosporins, such as ESBLs, overproduction of cephalosporinases, and carbapenemases of the KPC and metallo-ß-lactamase types, without distinction between those mechanisms of resistance. Finally, a copy of the Rapid ESBL NP test (not validated by the inventors of the original Rapid ESBL NP test) named Rapid ESBL Screen Kit 98022 (Rosco-Diagnostica A/S, Taastrup, Denmark) has been developed. Those tests, tests were compared using a same collection of enterobacterial isolates possessing well-characterized resistance mechanisms. Thea collection of 108 strains including wild-type strains, strains producing ESBLs, overexpressed cephalosporinases, and carbapenemases. The sensitivity and specificity for detecting ESBL producers (n = 60) were 95% and 100% for the Rapid ESBL NP test (after 30 min), 80% and 87% (after 30 min) and 92% and 83% (after 2 h) for the Rapid ESBL Screen, and 88% and 71% for the ß-Lacta test, respectively. Varied and time-consuming detection (up to 2h) of ESBLs by the Rapid ESBL Screen and concomittant and variable detection of producers of AmpC and several types of carbapenemases correspond to significant shortcomings of using the Rapid Screen ESBL and ß-Lacta tests, respectively.

The Rapid ESBL NP test that is currently developed industrially is also able to detect ESBL producers directly from blood cultures and urines. This test that may be implemented worldwide and may contribute to avoid the overuse of carbapenems and to preserve their efficacy. Actually, carbapenems are mostly considered as last resort antibiotics. Coupled with rapid bacterial identification, use of the Rapid ESBL NP test may also facilitate implementation of a rapid strategy for containment of carriers of ESBL-producers.