The development of bacterial infections is a major challenge as pathogenic bacteria spread through healthcare facilities where patients may come in contact with complex bacterial communities heavily colonizing on hospital surfaces. These bacteria cause internal and external infections, such as pneumonia, chronic wounds, gastroenteritis, cellulitis, and staph, that represent urgent threats to human health, specifically in the context of rapidly increasing rates of antibiotic resistance, requiring the development of sensors for prompt detection, identification, and real-time monitoring of early infection stages. 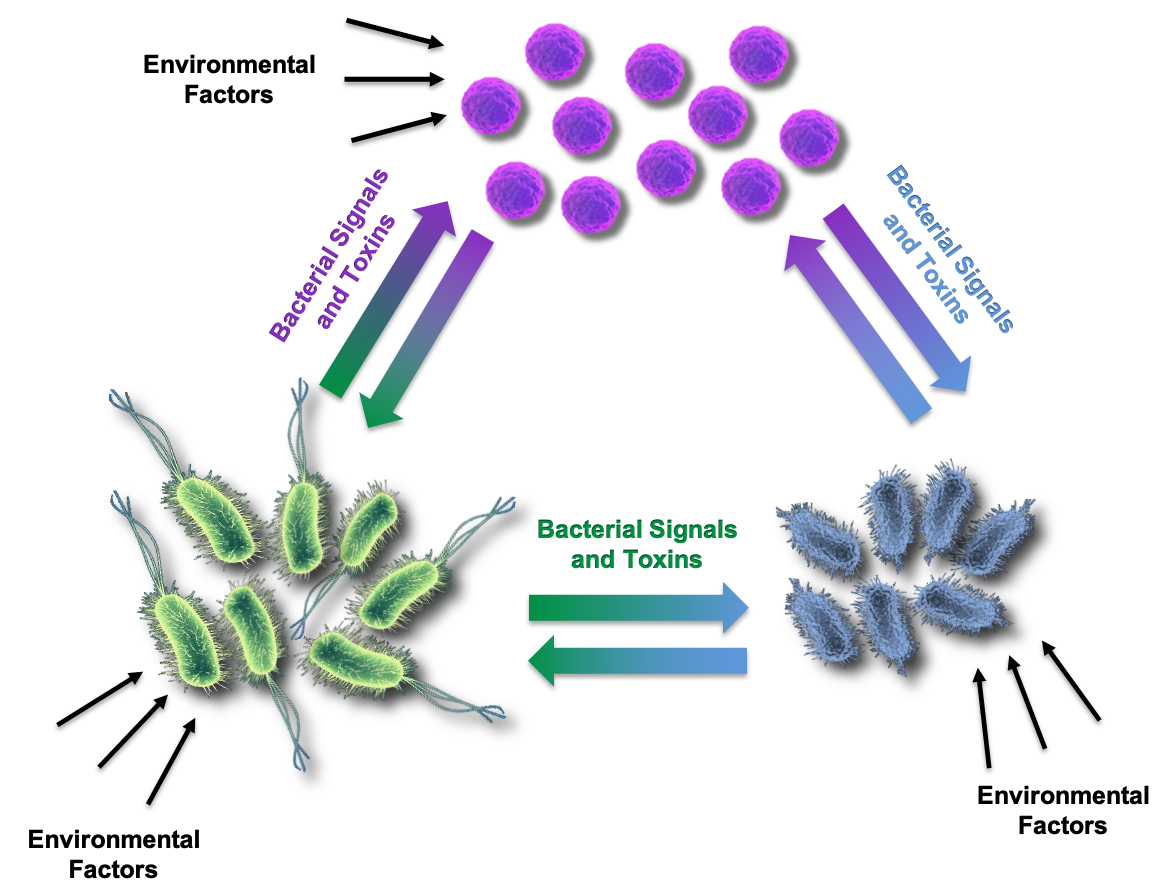 Fig. 1. A simplified schematic of a complex polymicrobial community consisting of three different groups of bacteria, each of which self-produce their diffusible chemical signals and toxins as a means to communicate with the neighboring bacterial communities. The environmental factors, such as growth media, oxygen levels, temperature, and pressure, additionally impact these microbial groups and the production of bacterial signals and toxins.

Infections are typically populated by multiple bacteria, including Pseudomonas aeruginosa, Staphylococcus aureus, and Escherichia coli. Relevant to human health, polymicrobial colonies are prevalent throughout the human body, both during healthy and diseased conditions. While most infections are historically attributed to individual pathogenic bacteria, it is now better understood that polymicrobial infections immensely affect disease development. Bacteria rarely grow in isolation, as in almost all environments, multiple species inhabit diverse microbial communities in which interactions between species shape the biological activities of cellular populations. As highly complex microorganisms, bacteria participate in both adversarial and synergistic relationships through coordinated group behaviors. During polymicrobial infections, bacterial groups self-produce distinctive signals and toxins, which allow microorganisms to crosstalk with neighboring communities (Fig. 1). In many important systems, bacterial responses are mediated by diffusible chemical species (molecules) that transform cells into highly virulent (contagious), immune-resistant colonies that engage in chemical warfare with their hosts. When engaging in such behaviors, the opportunistic human pathogen P. aeruginosa produces a unique bacterial weapon as a specific molecule, pyocyanin, and other similar biomarker molecules known as phenazines that are highly toxic to surrounding mammalian host cells and other competing microorganisms. At present, hospitals rely on the utilization of traditional cell-culturing methods that classify bacteria based on visual growth patterns; this approach takes several days to determine the bacteria identity. As a result, most untreated bacteria develop increased antibiotic resistance. Therefore, fast, sensitive, and reproducible detection of these toxins is of clinical importance as it could provide insights regarding virulence mechanisms of P. aeruginosa.

Our research study reported the use of carbon nanoelectrode arrays as a sensor for quantitatively studying polymicrobial environments that consist of clinically relevant P. aeruginosa, S. aureus, and E. coli. As an alternative to the standard hospital methods, our sensor provides low-cost, rapid identification (within seconds) and continuous monitoring of infection by chemically tracking signals/toxin molecules of P. aeruginosa. The mechanism of these excreted molecules is to promote redox-active chemical transformations that regulate colony growth, which can be detected and monitored using electrochemical methods to determine changes in concentrations of excreted toxin molecules in real-time. In particular, by utilizing square-wave voltammetry, a very sensitive electrochemical technique, the resulting signal from the redox-active processes of pyocyanin is measured as a function of the applied potential, which drives the electrochemical reaction on the sensor surface (Fig. 2).

Our results demonstrated quantitative monitoring of the distinct dynamics of P. aeruginosa toxin molecule production with regard to growth in multispecies samples in two different laboratory media commonly used for bacterial growth. Specifically, the presence of S. aureus caused a notable decrease in P. aeruginosa toxin production rates in only one growth medium whereas the presence of E. coli drastically reduced toxin molecule production in both growth media. We correlated these differences to competition in nutrient consumption and production of other cellular toxins in polymicrobial samples. The results demonstrated that other bacteria impact P. aeruginosa toxin production, which also directly depends on growth media. Consequently, these data point to the need for standardization of stimulated growth media to closely represent real environments, which have great implications towards understanding the onset of bacterial infections, antibiotic resistance, and treatments. At present, our electrochemical platform has the sensitivity to distinguish differences in P. aeruginosa toxin molecule production, showing promise as a sensor for diagnostics and treatment of bacterial infections.