Heightened emotional states increase impulsive behaviors such as excessive alcohol drinking in humans.  However, very few animal studies have focused on the role of emotional status as a motivator of alcohol drinking.  This is a major roadblock to the study of alcohol abuse because animal models allow researchers to use methods that are not allowed with human subjects.  Our laboratory has set out to solve this problem by combining an animal model of both alcoholism and emotion.

Ultrasonic vocalizations (USVs) emitted by rats are considered to be a reflection of their real-time emotional state and are widely accepted as animal models of affect. Rodents emit USVs in the 50-55 kHz and 22-28 kHz ranges, which are reliably associated with positive and negative emotional states, respectively.  USVs have received increased attention in drug abuse studies because administration of cocaine, amphetamine, and drug-associated cues increase positive USV emissions. In addition, escalated levels of alcohol consumed by alcohol-dependent rats are significantly correlated with anticipatory positive USVs. And, alcohol-dependent rats in a state of withdrawal are more easily provoked to emit negative USVs by mild aversive stimuli.  Our laboratory has recently developed reliable, high-speed analysis techniques to compile USV data during multiple-hour drinking sessions. 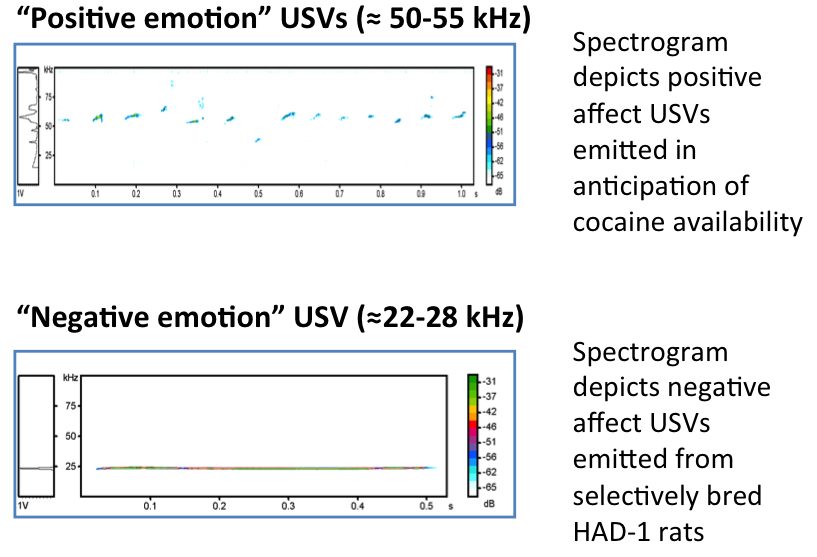 We received 24 male HAD-1 rats that were housed under a reverse light/dark cycle.  Drinking-in-the-dark (DID) Sessions took place in plastic cage test chambers. USVs associated with both positive and negative emotional states were recorded for the entire duration of each session and were analyzed using the WAAVES algorithm. In this study, male HAD-1 rats had access to water, 15% and 30% EtOH during 8 weeks of daily 7-hr drinking-in-the-dark (DID) sessions.  The duration of the entire experiment was 8 weeks with testing 5 days per week. 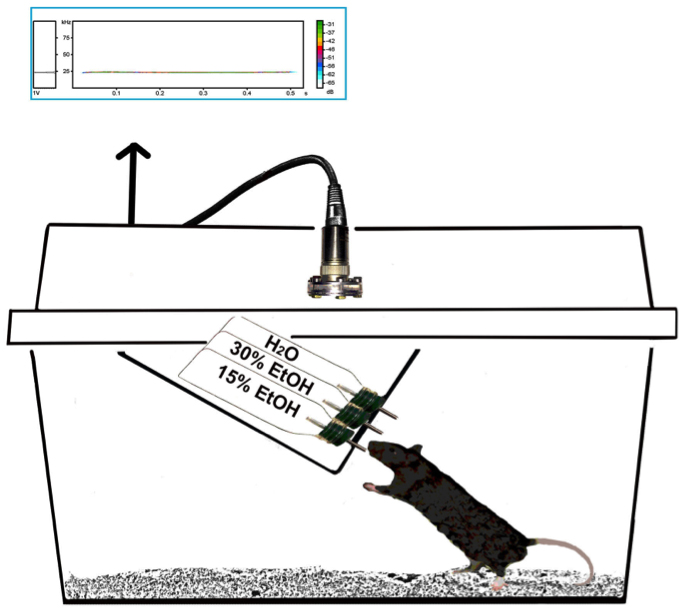 Overall mean intake of alcohol across 8 weeks of DID sessions was 2.9 g/kg, which is considered an intoxicating level of drinking.  Findings showed basal negative USVs were emitted by both EtOH-Naïve (Control) and EtOH-experienced rats. We also found that alcohol experience enhanced negative USV emissions.  Additionally, data revealed that USV acoustic parameters (i.e., mean frequency in kHz) of both positive and negative USVs were significantly suppressed by chronic alcohol experience.  Moreover, our data revealed that EtOH intake was correlated with the number of negative affect USVs emitted—in other words, the more negative USVs the animals emitted, the more alcohol they drank.