Kidney stones are incredibly common in the United States and the prevalence is increasing at a remarkable rate.  In the United States, the chance of a man having a kidney stone at some point in his life is 13% and for women the chance is 7%. Those numbers are expected to increase with the rise in diabetes and obesity, both which contribute to stone formation. 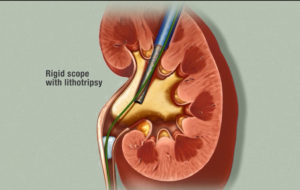 A picture demonstrating the PCNL technique

There are different ways to treat kidney stones. If a stone is very small it may not need active management and the patient can pass it spontaneously. Larger stones may require surgery. In the last couple of decades there have been countless developments in the surgical management of kidney stones. For example, they now have very small cameras called ureteroscopes that fit up the ureter (the tube that drains the kidney into the bladder) to the kidney. That scope is then advanced to visualize the stone and a laser is passed through it and used to break the stone into smaller pieces that are easily pulled out or passed. There is also something called Extracorporeal Shock Wave Lithotripsy (ESWL) which uses shock waves to break up the kidney stones from outside the body. Both of the techniques just described are referred to as “minimally invasive” since they do not require an incision and are usually performed as an outpatient surgery, meaning the patient goes home right after and does not stay in the hospital. Another surgical technique that is a bit more involved for both the physician and patient is called percutaneous nephrolithotomy (PCNL). This surgery is still technically minimally invasive but does have a small incision (about 1 centimeter) and usually requires at least one overnight stay in the hospital. PCNL is a technique where the surgeons accesses the kidney from the back and passes a scope through the patient’s back directly into the kidney. The stone is then treated with instruments that fragment and remove the stone. 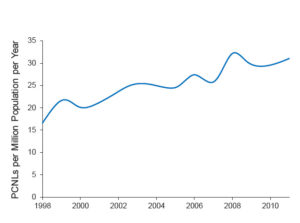 Annual rates of percutaneous nephrolithotomy (PCNL) in the United States from 1998 to 2011.

With the increasing popularity of the surgeries that are outpatient and do not require an incision, one would predict that the utilization of PCNL would have decreased over the last several decades. This study looked at the incidence of PCNL in the United States from 1998-2011 using the largest, publically available inpatient health care database (The Nationwide Inpatient Sample).  We found that 105,180 patients underwent PCNL in the U.S. during the study period. The annual rate of that surgery increased from 17 per million adults in 1998 to 31 per million adults in 2011. Significant increases were seen among white and Hispanic patients. There were increases seen in both men and women older than 18 years old, with a larger increase seen in women.

The increase in PCNL is likely attributable to several factors, including the overall increase in stone prevalence and the increasing complexity of affected patients. PCNL offers increased stone-free rates (higher success) than the more minimally invasive techniques when treating large stones or complex patients.  Hopefully the recognition that the utilization of PCNL is increasing, and in fact has nearly doubled since 1998 in the United States, will lead to increasing training on the procedure in U.S. urology residency programs and will also encourage further research and development to continue improvement.