Flowering plants arose during the Cretaceous, and up to date they count around 235,000 species, representing the largest and most diverse group within the plant kingdom. One of the foundation of their success relies upon the production of the seed, which represent the outstanding solution to conserve the genetic information. In higher plants, during embryogenesis the primary axis of development is established by the shoot apical meristem (SAM) and the root apical meristem (RAM). Throughout plant life apical meristems continually produce new organs (branches, leaves, roots) which are added to those formed during embryogenesis (recurrent ontogenesis). The genetic information is directly delivered from the SAM to the mega- and micro-sporogenous tissues during the reproductive phase. In seed plants, branching, achieved by axillary meristems (AMs), plays a pivotal role in the development of the aboveground plant architecture (Fig. 1). 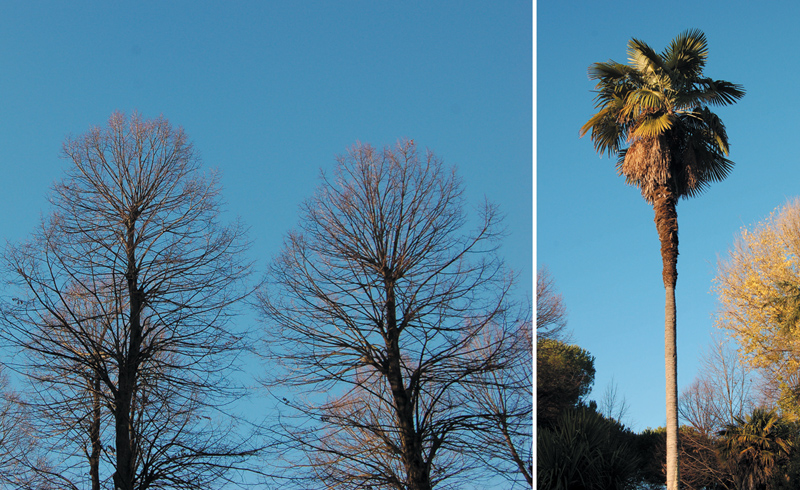 Leaf abaxial (AB) and adaxial (AD) identity appear to be one of the key elements to specify the cell fate for AM initiation in the axil of the leaf base. The network consists mainly of two groups of transcription factors (TFs): the class III HD-ZIP (e.g., PHABULOSA, PHAVOLUTA, REVOLUTA) that promotes AD leaf fate and the YABBY and KANADI (KAN) family that acts antagonistically with HD-ZIP IIIs together with miRNA165/166 to promote AB leaf fate. In addition, KAN proteins directly target genes related to auxin signaling through the AUXIN RESPONSE FACTOR3/ETTIN and ARF4 genes to specify AB fate. Several evidences suggest that the AD domain of a leaf possesses a special competence to form meristems. Class I KNOX family homeodomain TFs together with ARP genes have a key role in regulating the balance between SAM maintenance and organogenesis. 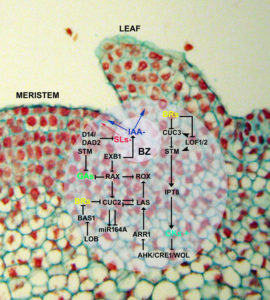 It is well-defined that most genes (e.g., BARREN STALK, CUP-SHAPED COTYLEDON, DECREASED APICAL DOMINANCE, DWARF14, EXCESSIVE BRANCHES1, FASTIGIATE1, LATERAL ORGAN BOUNDARIES, LATERAL ORGAN FUSION 1 and 2, LATERAL SUPPRESSOR, REGULATOR OF AXILLARY MERISTEMS, REGULATOR OF AXILLARY MERISTEM FORMATION) identified through the analysis of mutants with defects in AM and/or floral meristem (FM) initiation, act on limited zones marking the boundary zone (BZ) between the SAM and leaves and/or the BZ between inflorescence/FMs and bracts. These genes have key roles in many aspects of embryo and post-embryo development as well as the establishment of the spatial and temporal regulation of meristematic activity to design the cell fate for AM and FM initiation.

Mutations that affect the initial steps in reproductive AM formation often result in the development of characteristic pin-like inflorescences, from which the name pin-formed (pin) is derived. Most of the PIN proteins are located in the plasma membrane; they can therefore mediate directional auxin fluxes within tissues and generate auxin maxima and gradients that influence the development of lateral organs. In addition to auxin, the chemical signals required to specify the cell fate for AM initiation in the BZ involve: citokinins (CKs), strigolactones, brassinosteroids, gibberellins and sugar. Therefore, a complex interplay of chemical substances and TFs is established to control AM initiation in the boundary domain (Fig. 2). For example, accurate endogenous auxin and CK levels are sustained by a homeostatic feedback loop in the region of AM initiation. After the establishment of an auxin minimum in the BZ, the activation of CK perception and signaling is required for AM initiation. Therefore, depletion of auxin from leaf axils is a prerequisite for AM formation during vegetative development. Three CK receptors, i.e., ARABIDOPSIS HISTIDINE KINASE2, AHK3, and AHK4/CRE1/WOL, perceive the CK signal to activate the type-B ARABIDOPSIS RESPONSE REGULATOR TFs. Moreover, SHOOT MERISTEMLESS can activate IPT expression to promote CK biosynthesis. These complementary results show the importance of heterogeneous hormone allocation in AM formation.