Regeneration evolved in anamniotes in relation to metamorphosis: indications for attempts to induce limb regeneration in humans 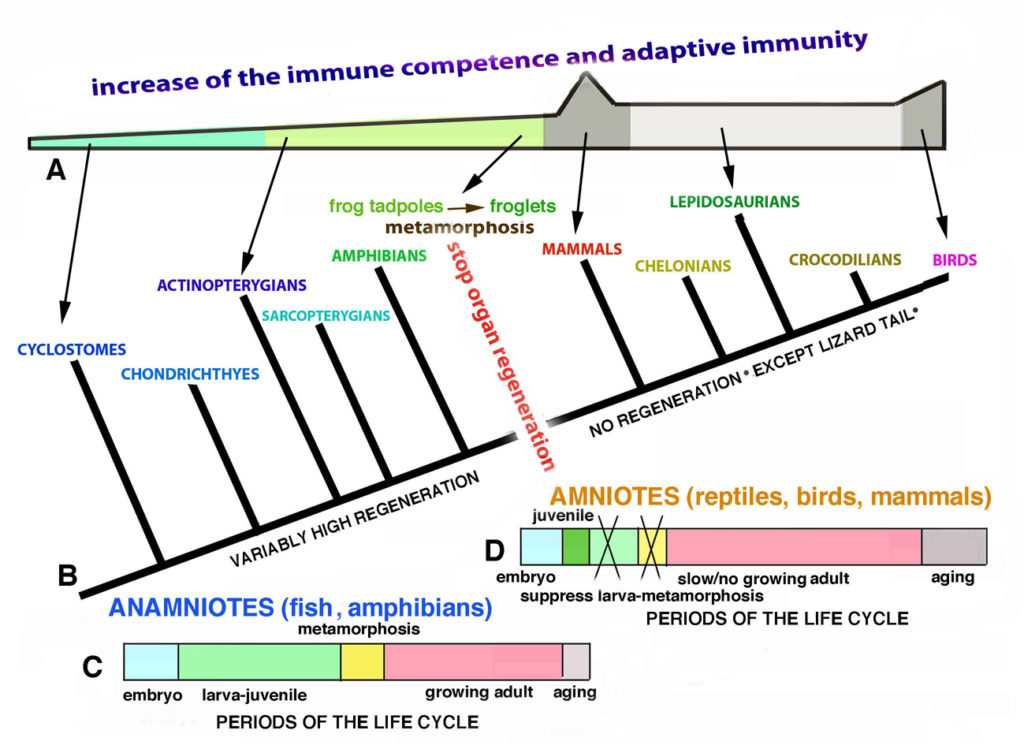 Even more dramatic in numerous species (lamprey, eels, bichir, monkfish, moray, halibut, weeverfish, flounders, soles, etc.), the tadpoles are so different from the adult to require an intense re-modeling period, a metamorphosis, to become adults. In amphibians, newt, frogs and toads, tadpoles are quite different from adults. Metamorphosis requires genetic programs for destruction of transitory tadpole organs that are replaced by new organs, a physiological degeneration and regeneration coded in their genomes. The large genomes of fish and amphibians contain programs for building an embryo, then a larva, destroying it and building the adult (Fig. 1 C). Metamorphic regeneration of new organs represents a pre-condition for adult regeneration. The destructive phase is operated by immune cells that recognize antigens of larval tissues as not-self and those of the new organs as self. The low activity of the immune system in anamniotes facilitates organ regeneration since the blastema formed after injury is tolerated long enough to allow regeneration. In amniotes more specialized immune cells tend to destroy cells with embryonic characteristics derived from healing after injury. This is observed during loss of regenerative capability observed in frogs, from aquatic tadpoles to terrestrial froglets. Approaching metamorphosis tadpoles cannot longer regenerate limbs, spinal cord, eyes etc., when the immune systems that turns tadpoles into froglets becomes efficient. This suggests that when the amniote egg evolved during the water to land transition in the Carboniferous Period, 320 million years ago, in amniotes the larva and metamorphic stages were suppressed from the life cycle (Fig. 1 D). While new genes evolved for adapting amniotes to the terrestrial environment others were lost including genes operating during metamorphosis and regeneration. The stronger immune system of amniotes for counteract cancer mutations from UV light and heavier microbial contamination with respect to aquatic vertebrates, became more efficient. Gene loss and immune cells impede regeneration in amniotes, with the amazing exception of lizard tail where mechanism of immune-suppression evolved. This is somehow associated to evolution of autotomy in lizards, a process of tail self-amputation that limits inflammation and temporary blocks immune-attach. Immune cells are very effective in mammals and no regenerative blastema is formed. Therefore fish and amphibians regenerate organs because they evolved life cycles comprising a process of metamorphosis, a pre-adaptation to regeneration, while mammals lost this process. 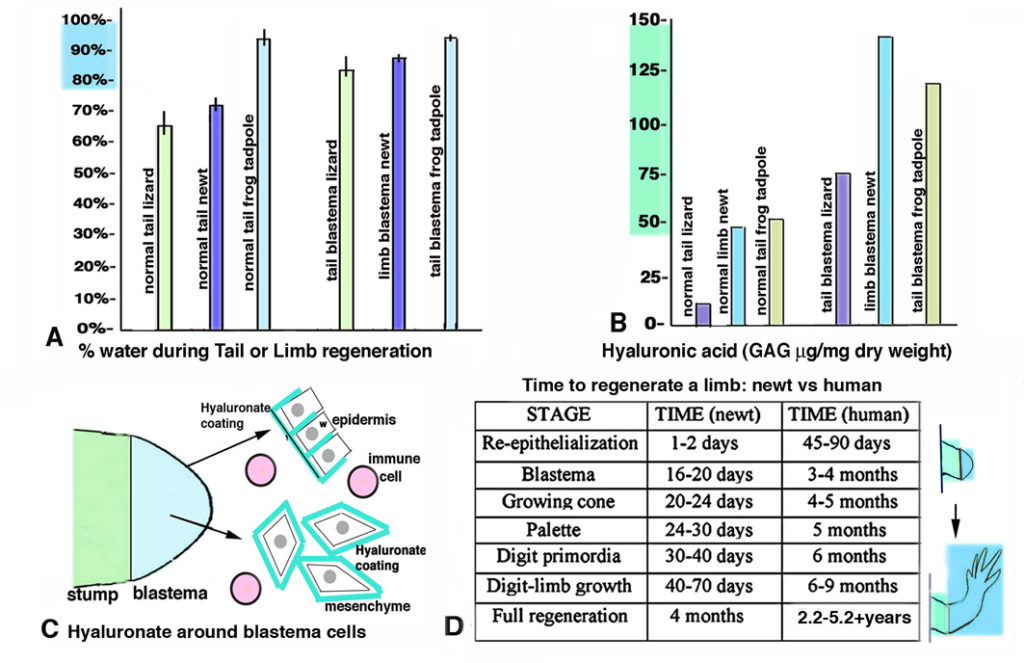 How can Regenerative Medicine really hope to invert the evolution of mammalian scarring into a successful process of healing and regeneration? The first requirement would be to re-create an immune-suppressed blastema rich in water (>80%) and hyaluronate (>30 mg/mg dry weight), like during embryogenesis or amphibian-lizard regeneration (Fig. 2 A, B). Hyaluronate forms aqueous connective tissues where cells can migrate and also shields mesenchymal cells from immune cells, acting as an immune-suppressant (Fig. 2 C). This would be the first step of Regenerative Medicine in the attempt to induce limb regeneration in humans. The following step would require the stimulation of growth of the blastema into a limb, a long process when compared to that of the newt that occurs in about 4 months to be largely completed. The calculated period for human would vary between 2.2 to 5.2 years, or longer in order to regenerate a limb of similar dimension than the contralateral limb (Fig. 2 D). This is the best hope that Regenerative Medicine can provide for amputated people since pushing limb regeneration to a fastest tract would risk to form tumors.

Hyaluronic acid in the tail and limb of amphibians and lizards recreates permissive embryonic conditions for regeneration due to its hygroscopic and immunosuppressive properties.
Alibardi L
J Exp Zool B Mol Dev Evol. 2017 Dec