Sodium phosphate drugs (solutions, tablets or enemas) are used since 1990s as laxatives for bowel cleansing before endoscopy and radiology examination, or occasionally for treatment of severe constipation. Sodium phosphate drugs are low-volume osmotic purgatives, their administration is connected with high load of phosphates and sodium. Originally it was believed that due to the osmotic effect, components of these laxatives are not absorbed from the gut. However, data from the last decades showed evidence of systemic sodium and phosphate absorption. The sodium overload can be easily managed by physiological regulatory mechanisms without any long-term impact, but the massive acute phosphate load may lead to several unfavorable clinical consequences in risky patients.

Among adverse events connected with the use of sodium phosphate drug has been reported: 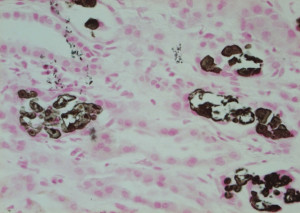