“Inevitable as the passing of time” is a common phrase and a simple truth; in our lives, we may have impactful experiences, grow and learn but, inescapably, we age. It is clear that as we age, our cells become more susceptible to diseases including diabetes, cancer and infections, and neurodegenerative diseases such as Alzheimer’s disease. While we know that the fitness of our cells and organs fades during aging, which molecular mechanisms control age-related cellular deterioration and the interface between aging and disease remain unknown. Novel evidence suggests that aging is not a disorganized accumulation of cellular dysfunctions; rather it represents a fascinatingly organized and hierarchical network of defective cellular pathways and structures. 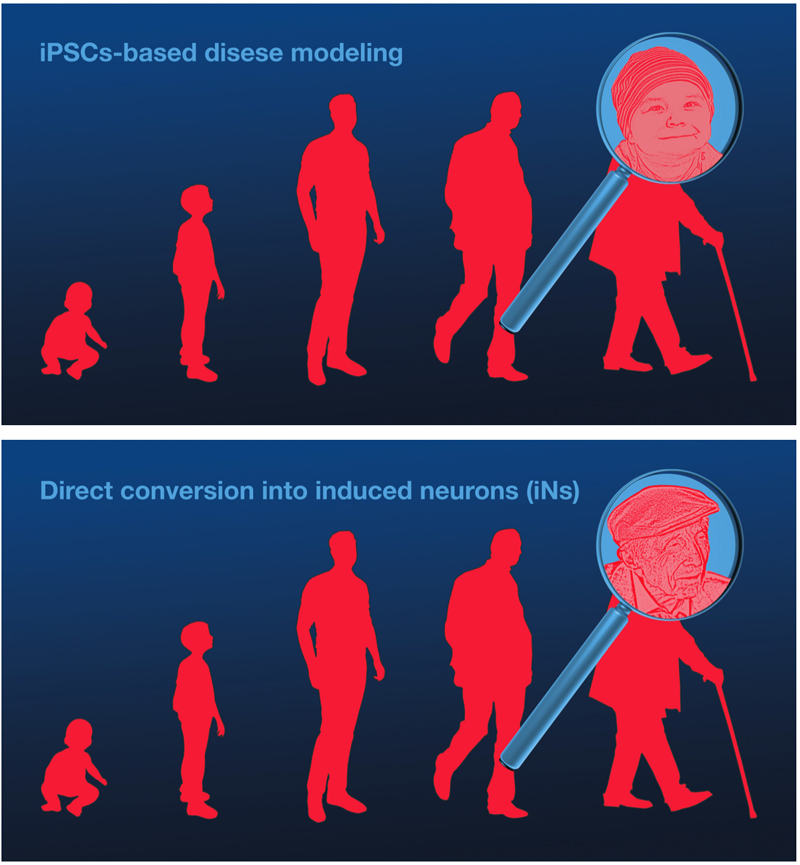 Fig. 1. Preservation of biological age in human disease models. To develop a more authentic model system to study biological aging and its interface with diseases, the direct conversion of human fibroblasts into induced neurons (iNs) appears promising. Unlike neurons from iPSCs, where the aging clock even of very old cells is reset to early embryonic stages, iNs reflect the age of their human donor and therefore provide a new tool for research on brain aging and disease.

Age-related neurodegenerative diseases affect neurons, which are unique cells generated while we are still embryos and then function throughout our lives without much capacity for replacement. Due to this constant functioning and lack of cell division, many unique aging-related characteristics accumulate that in turn lead to disease phenotypes.

Accumulation of DNA damage is often regarded as one of the earliest causes of cellular aging: the steady time-dependent accumulation of DNA damage throughout life leads to mutations and ultimately cellular dysfunctions. While our bodies have remarkable DNA damage repair machinery, recent data demonstrate that age-dependent malfunctioning of this machinery leads to accelerated rates of persistent DNA damage in old age. One new research focus in this context is on nuclear pores, which are transport channels in the nuclear membrane that act as gate keepers to the nucleus, protecting the DNA and the regulatory machinery inside of the nucleus. Over time, the age-dependent changes to the cell at the pore level are conserved and accumulate as the lack of cellular division prevents the reorganization and repair of these nuclear pores. This process can lead to DNA damage, among other problems. For instance, patients suffering from the accelerated aging disease Hutchinson-Gilford Progeria syndrome are born with a mutation in the protein that shapes the nuclear envelope, which leads to distorted nuclear architecture and impaired nuclear pore function, and inevitably causes accelerated aging of these patients.

Research on human aging is difficult due to several factors, including that the longevity of humans relative to animals means there are few animal models to study and there is a scarcity of human brain tissue samples. To meet the latter challenge, scientists developed a revolutionary new biotechnology called induced pluripotent stem cells (iPSCs) from which we can culture patient neurons in vitro. A valuable tool for studying the human brain, iPSCs are created by rejuvenating cells to an embryo-equivalent stage upon reprogramming from patient fibroblasts. However, this “fountain of youth” process results in the cells losing most of their aging phenotypes, making them less than ideal to study aging (Fig. 1). Excitingly, a recent, powerful advancement is the development of the process of direct conversion of neurons using epigenetic remodeling of human fibroblasts directly into patient-specific induced neurons (iNs). These iNs circumvent the rejuvenating iPSC state and thus mirror the aged phenotype of the patient (Fig. 1). Thus, iNs hold immense potential for modeling diseases that are age related, and they have already been used to study a wide variety of these diseases, revealing new discoveries that were previously not evident in iPSC studies. For example, research utilizing iNs derived from patients with amyotrophic lateral sclerosis and Huntington’s disease revealed aberrant localization of disease-specific proteins in the cells, probably related to aged nuclear pores. Using induced neurons that accurately reflect the age of subjects, we can learn more about how our cells change with age and we will be able to treat aging as a disease risk factor to help individuals age more healthily in the future.