Resveratrol is a potential remedy for the treatment of pancreatic fibrosis

The pancreas serves as both endocrine and exocrine glands in a human body in order to help food digestion and blood glucose regulation. In fact, more than 90% of the pancreatic mass comprises the exocrine cells which store huge amount of digestive enzymes. However, in some pathological conditions, such as tissue damage or inflammation, these digestive enzymes are pre-maturely released and lead to a lot of systemic complications, namely pancreatitis. As the pancreas repairs itself from the damage caused by the pre-maturely released digestive enzymes, extracellular matrix (ECM), particularly collagen and fibers, are produced for the tissue repair and regeneration. However, over-production of these ECM components is often observed in episodes of pancreatitis. The fibrous ECM components indeed replace normal pancreatic tissues and result in the formation of permanent scars. Such a phenomena is known as pancreatic fibrosis, which is a common pathological feature of recurrent pancreatitis. These scars in turn impair pancreatic functions in a severe manner. Previous studies reported that the production of ECM components is principally based on the activation of pancreatic stellate cells (PSCs) during pathological events, e.g. inflammation. In a normal pancreas, PSCs reside at a quiescent state, i.e. a resting state, and do not promote the production of ECM production. However, they are activated by cellular signals upon stressed conditions. The previous findings also pointed out that pancreatic levels of ECM components not only accompanied by PSC activation, but also correlated to the degree of pancreatic fibrosis. 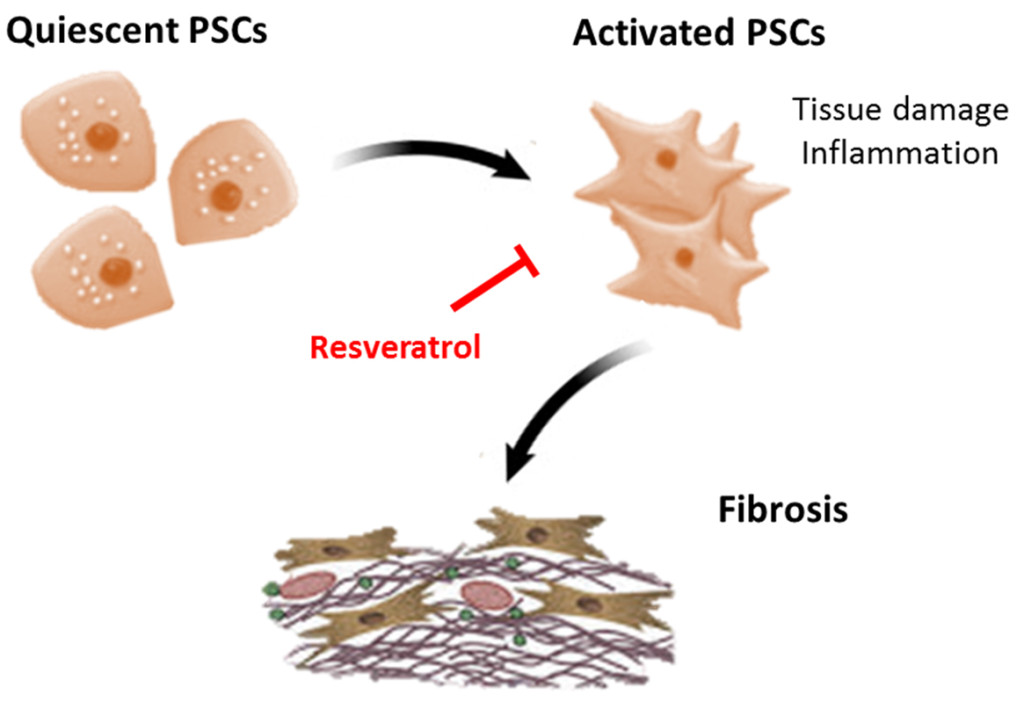 Natural products have been shown to provide beneficial effects in combating diseases, so that they are recommended by various pharmacological orthodoxies. In this regard, our research group has lately explored into a few herbal compounds and found that resveratrol can efficiently reduce the generation of ECM collagen and fibrous filaments in cultured PSCs. Resveratrol is actually a polyphenolic compound naturally found in red grapes, red wine, peanuts and berries including blueberries, bilberries and cranberries. More technically, resveratrol is a product of the plant immune system, so-called phytoalexin, of many plant species for fighting against bacterial and fungal infection as well as ultraviolet irradiation. There are resveratrol-type products commercial available on the market nowadays and most of them are extracted from Polygonum cuspidatum (Japanese Knotweed). Our experimental result provides a scientific ground for the consumption of resveratrol in the medical management of pancreatic fibrosis.