Diet is important to fuel growth and cellular machinery and thus, plays an important role in the survival of a living organism. One of the important components of our diet is protein, which is made of different combinations of biomolecules called amino acids. Nowadays, we often notice big fancy bottles of different amino acid supplements in pharmacy stores or on different advertising platforms. In the food industry, several amino acids are used as flavoring agents, preservatives, and in food fortification. Amino acids are an important part of our nutrition and lack of them is detrimental to our health. However, there are many important questions we need to understand before we decide to add extra amino acids to our diet, like: What is the effect of excess amino acid intake? Do we all need amino acid supplements? Do our genetics dictate the effects of these amino acids? 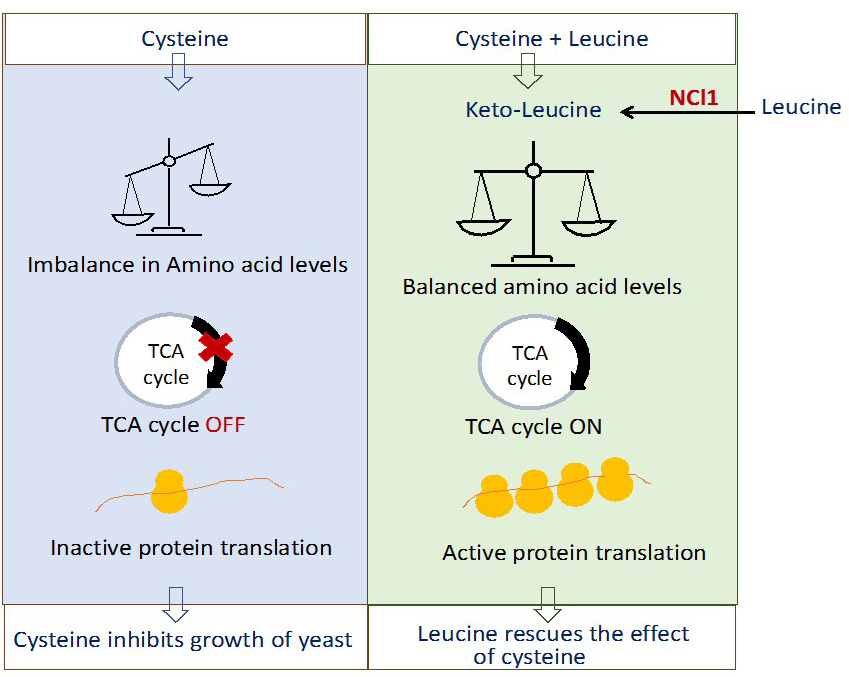 Scientific literature suggests that increased levels of individual amino acids are associated with different neurological and metabolic disorders. Various reports also highlight the toxic effect of excess amino acids, however, the mechanism of toxicity was unknown. In this study, we choose cysteine, a thiol containing amino acid, to understand the systemic alteration due to its excess at the cellular level. The model system used in this study is yeast- yes, it is also used for making wine and bread. Scientists often use yeast to understand many biological processes, as it is the simplest unicellular model system and yet has features mimicking human cells. Knowledge gained from yeast is often used to understand the basic molecular processes in humans. In yeast like humans, the cellular information is stored in genetic material called DNA, the information from DNA is passed to another molecule called messenger RNA (mRNA) which is then translated to form proteins using amino acids as the building blocks, these proteins in the form of enzymes are important to synthesize metabolites which regulate the metabolic balance of a cell. The study of the role of a certain fragment of cellular DNA is called genetics; study to identify and quantitate the total pool of RNA, protein, and metabolites in a cell is called transcriptomics, proteomics, and metabolomics, respectively. We used all these approaches to understand the effect of excess cysteine in yeast. We find that high levels of cysteine inhibit the growth of yeast and lead to an imbalance in the levels of other amino acids. Cysteine plays an important role in the formation of proteins, but we find that high levels of cysteine inhibits overall protein synthesis. Although cysteine inhibited total protein synthesis, it increased the expression of some specific proteins involved in branched chain amino acid synthesis. To understand the role of other amino acids during excess cysteine, we added other amino acids in combination with cysteine, and found      that the addition of leucine, a branched chain amino acid, alleviated the negative effect of cysteine. We then screened ∼4,500 genes in yeast and found that deletion of a gene called NCL1 drastically increased the toxicity of cysteine; even leucine was unable to decrease the toxicity of cysteine. During protein synthesis, the information from mRNA is decoded by the help of transfer RNA (tRNA), which carries specific amino acids to build the protein.NCL1 encodes for a protein called leucine tRNA methyltransferase, an enzyme that methylates the t-RNA which carries leucine.  Interestingly, we found that NCL1 is important for converting leucine to keto-leucine, the absence of which blocks tricarboxylic acid cycle (TCA), a metabolic cycle important for energy production, and increases the toxicity due to cysteine. Overall, this study highlighted the effect of excess cysteine in yeast and uncovered the role of a leucine – tRNA methyltransferase in regulating metabolism.