Acute heart failure (AHF) affects 1-2% of adults in developed countries. It strikes mainly people above the age 60, peeking in those older than 85 (prevalence ~ 17.4%). AHF is a life threatening medical event, with gradual or rapid onset, that requests prompt hospitalization. It is mainly due to the inability of the hart to pump the required amount of blood to various systems and organs of the body. Main symptoms of AHF are shortness of breath, fatigue and abnormal stagnation of fluids in the lung and other parts of the body (e.g. legs). Current treatments for AHF are mostly empirical, without solid experimental evidence. With these treatments a patient tends to recovers from the acute episode of AHF in one two weeks. However, he typically tends to have recurrent episodes of AHF requiring repeated hospitalisations, and after each episode he remains in general worsen medical condition (Fig. 1). 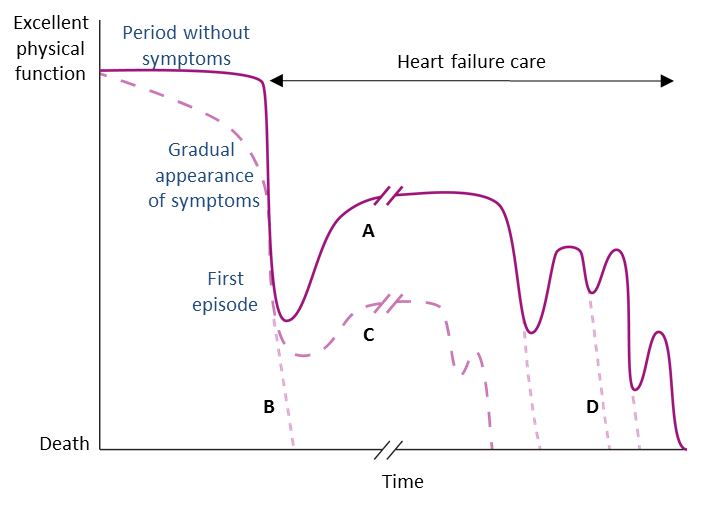 Overall, patients with AHF have a very poor prognosis, with a mortality rate at five years (from the first episode) of about 40%, and medical and social burden expected to increase in coming years. However, in spite of these treatment and prognostic limitations, the therapeutic armamentarium of AHF has remained almost unchanged during the last two decades. To understand the reasons of this lack of therapeutic innovation, we have reviewed the data published on drugs developed primarily for AHF since early 2000s. We tried to recognise factors that have worked for a successful approval or for the stoppage of the program, in an attempt to delineate future trajectories for AHF drug development. Over the last two decades, only ten drugs for AHF have progressed from preclinical to the clinical phase (Fig. 2). Three have been approved by regulatory authorities (i.e., nesiritide, levosimendan and tolvaptan), four have been stopped in Phase 3 (i.e., tezosentan, rolofylline/W-3902, serelaxin and ularitide) and three have been stopped in Phase 2 (i.e., urocortin 2, TRV027 and omecamtiv mecarbil (OM)/CK-1827452). The paradigm currently in use to develop drugs for AHF is highly inefficient and problematic. We have identified limitations at both preclinical and clinical levels of development programs. At the preclinical level, major drawbacks, were represented by animal models looking at short term endpoints (hours or days) which did not recapitulate the complexity of the long course of the human disease. At the clinical level the main weaknesses were represented by the disconnect between short term endpoints, assessed in the early stages of drug development, and medium-long term endpoints requested in Phase 3 for regulatory approval. This was further amplified by the lack of validation and standardisation of short and long term endpoints; absence of predictive biomarkers; conduct of studies on heterogeneous patient populations; use of different eligibility criteria, time of assessments, drug schedules and background therapies. In our view, the most striking finding was to notice that clinical trials were aiming to achieve medium or long term favourable outcomes with a treatment only ranging from 24 to 168 hours. We believe this approach should be questioned or abandoned. 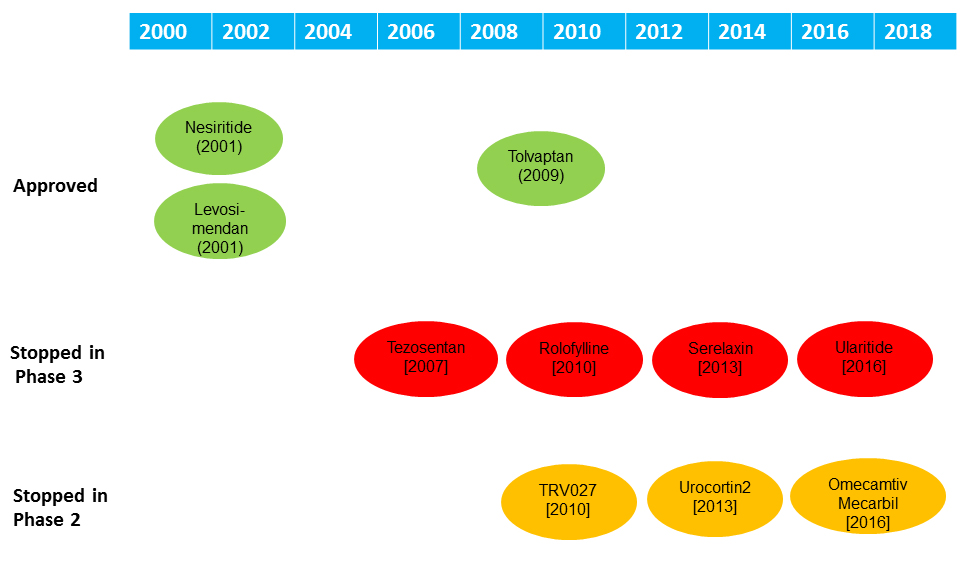 Clinical trials should look at new, more pragmatic, short term registration endpoints, targeting events during the hospitalisation or the immediate post-discharge periods. Clinical trials should aim to prove short term efficacy and safety on the basis of robust data (in contrast to the majority of currently used drugs). However, a key step for the construction of a successful drug development program remain a better understanding of AHF. Due to the complexity of the matter, the most reasonable way to move forward resides in a strong collaboration between main stakeholders of therapeutic innovation: scientific community, industry and regulatory agencies.