Reversibility of Aβ oligomer neurotoxicity: Insights into the treatment of Alzheimer’s disease

Alzheimer’s disease (AD), the most common neurodegenerative dementia disorder, causes memory impairment and other cognitive deficits. AD is neuropathologically characterized by senile plaques and neurofibrillary tangles, which are composed of amyloid β-protein (Aβ) and phosphorylated tau proteins, respectively. A number of recent studies support the emerging hypothesis that soluble oligomeric forms of Aβ (Aβ oligomers), but not Aβ fibrils, play a primary pathogenic role in the pathological cascade of AD. Importantly, soluble forms of Aβ provoke neurotoxic and synaptotoxic effects, including tau abnormalities (especially hyperphosphorylation), functional and structural abnormalities of synapses, and induction of neuronal death. Thus, oligomeric Aβ is considered a major culprit in the molecular pathology of AD. However, several questions remain to be elucidated, including the mechanisms by which oligomeric Aβ exerts its neurotoxic effects, the identity of the most bioactive species of Aβ oligomers, and the reversibility of Aβ oligomer neurotoxicity. 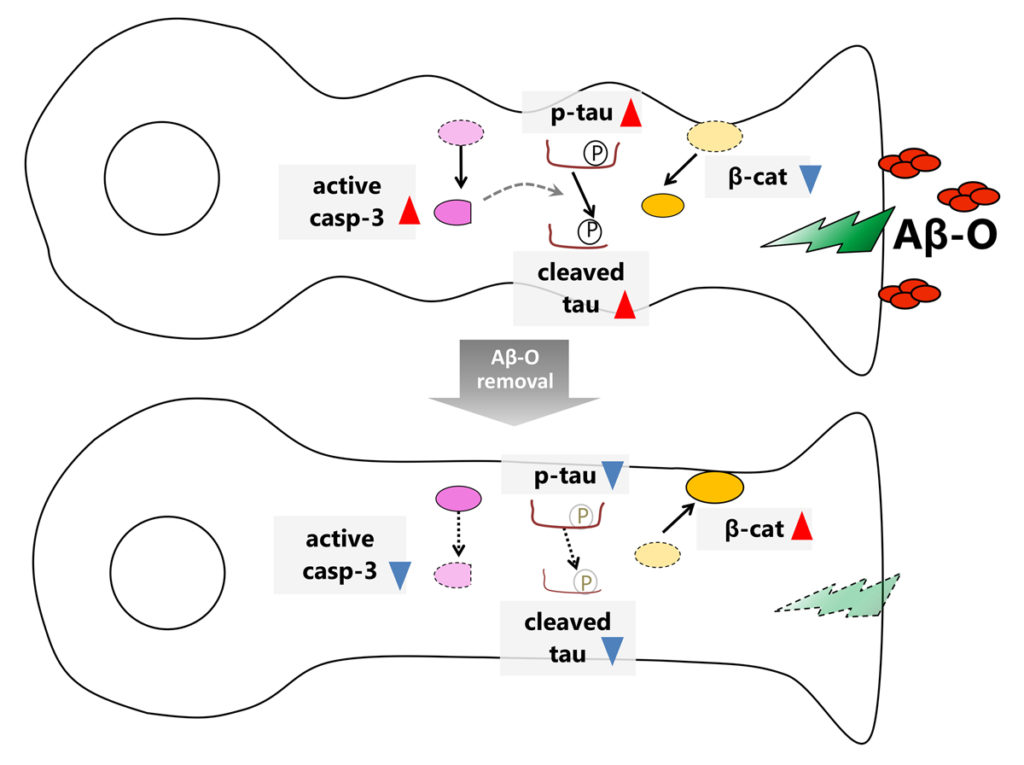 To test whether the neurotoxicity of Aβ oligomers is reversible, we treated neurons with Aβ-O for 2 days, at which point cells were deprived of Aβ-O by replacing the medium with fresh medium lacking Aβ-O, or were re-provided Aβ-O, and cultured for an additional 2 days; untreated neurons were used as controls. Neurons continuously treated with Aβ-O showed greater activation of caspase‑3, and exhibited persistent, abnormal alterations of tau and β-catenin. In contrast, upon Aβ deprivation, caspase-3 activation was considerably attenuated, aberrant phosphorylation and caspase-mediated cleavage of tau recovered for the most part, and abnormal alterations of β-catenin were partially reversed (Fig. 1). Notably, Aβ-O–induced β-catenin dislocation appeared to be associated with perturbation of synaptic organization. These results indicate that Aβ-O–induced neurotoxic and synaptotoxic alterations can be fully or partially reversed upon removal of extracellular Aβ-O in our neuron model. We thus suggest that Aβ oligomer-associated neurotoxicity is a reversible process in that neurons are capable of recovering from moderate neurotoxic insults. These data also support the idea that Aβ oligomers act on the cell surface of neurons to transmit aberrant signals, resulting in various abnormal cellular responses; upon Aβ oligomer removal, the aberrant signals subside, resulting in reversal of all abnormal responses (Fig. 1).

The reversible nature of the neurotoxicity of Aβ oligomers has significant implications for therapeutic strategies for AD. Notably, any treatment designed to remove or reduce Aβ oligomers could be effective in halting or even reversing the progression of the very early pathology of AD. Currently, immunotherapy targeting Aβ oligomers and inhibitors of BACE1 (an essential protease for Aβ production) are promising therapeutic options. Alternatively, any agent that protects neurons from Aβ oligomer neurotoxicity may be beneficial as a complementary treatment. Current and future clinical trials enrolling individuals with mild cognitive impairment (prodromal AD) or preclinical AD will clarify the clinical efficacy of drugs targeting Aβ oligomers as well as the validity of the Aβ oligomer hypothesis.