We usually think of enzymes – the molecules that drive all the reactions in our cells – as being proteins, but many scientists believe that the earliest enzymes may have been made of RNA. RNA, which is similar to DNA (the information storage molecule of the cell), is responsible for protein synthesis, translating the information of the DNA code into the language of proteins, and chemically joining the amino acids together to make a protein. Proteins are produced in the ribosome, which is the largest enzyme in the cell. Although the ribosome is composed of both RNA and protein, it is thought that it is the RNA that is the enzyme. This RNA – that links the amino acids together – is almost identical in all living things, and for this reason is thought to constitute the oldest existing enzyme on the Earth. 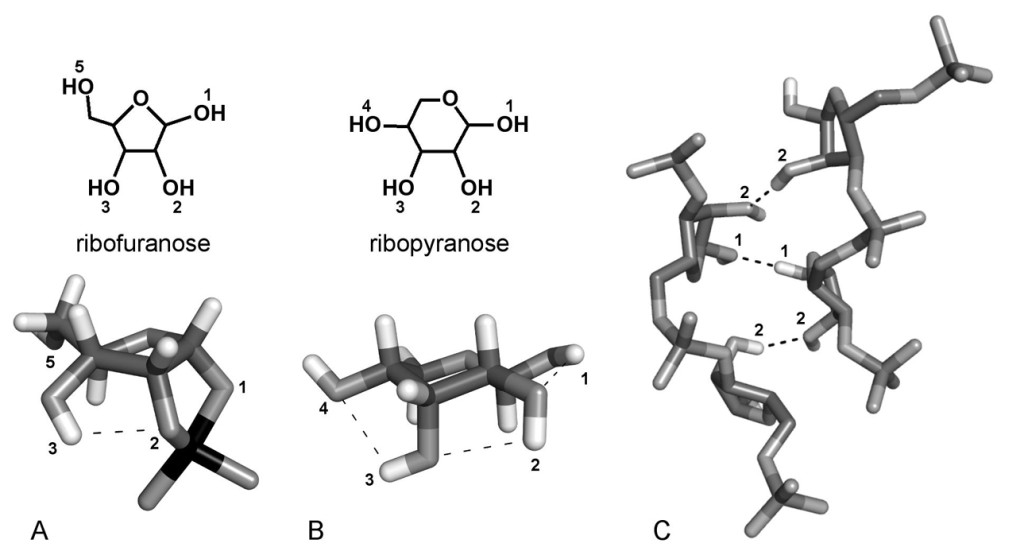 A. The five–membered ring form of ribose stabilized by its complex with boron, with the boron represented by the black lines at the bottom of the molecule. B. The six–membered ring form of ribose with the network of stabilizing interactions shown as dotted lines. This form of ribose crosses cell membranes ten times faster than other sugars similar to ribose. C. Segments of two RNA backbones, with possible stabilizing interactions between ribose hydroxyl groups on opposite RNA chains shown as dotted lines.

RNA itself is made up of three different parts. A sugar called ribose connected by negatively–charged phosphate groups makes up the backbone of the RNA chain, while the information in RNA is carried in the sequence of nitrogen–containing ‘bases’ attached to this backbone. These bases are usually represented by the single letters A, C, G and U (similar to the A, C, G and T found in DNA). While a lot of RNA’s special properties are due to the precise ordering – or sequence – of these bases, the particular arrangement of the ribose hydroxyl groups endows RNA (and ribose itself) with a number of unique – and some pretty surprising – attributes:

Postscript
Although not discussed in my article, Greg Springsteen and Gerald Joyce have found that the small molecule cyanamide reacts rapidly and specifically with ribose through two of its hydroxyl groups (the same two that clamp onto boron) to produce a stable compound that crystallizes out of solution even at low concentrations. What is more, these crystals separate out the two mirror images of the ribose molecule, only one of which is used in RNA! No other sugar they tested crystallized out – only ribose!