Spreading of light structures during their propagation significantly limits the possible applications of lasers. This seemingly unavoidable property of waves can be “corrected” either in inhomogeneous media, such as optical fibers, or in nonlinear media in which this spreading is compensated by nonlinear focusing. In the latter case, we are talking about solitons – particle-like (localized) structures of light propagating in a nonlinear medium promising for information applications.

If the focusing is due to nonlinearity of the refractive index of the medium with negligible losses, then the solitons are “non-calibrated”: they form families in which the soliton size is arbitrary. Then the noise will lead to a gradual change in the soliton parameters. This negatively affects the information potential of solitons. Another disadvantage of such solitons is limitation of their propagation length due to absorption of light in real systems. 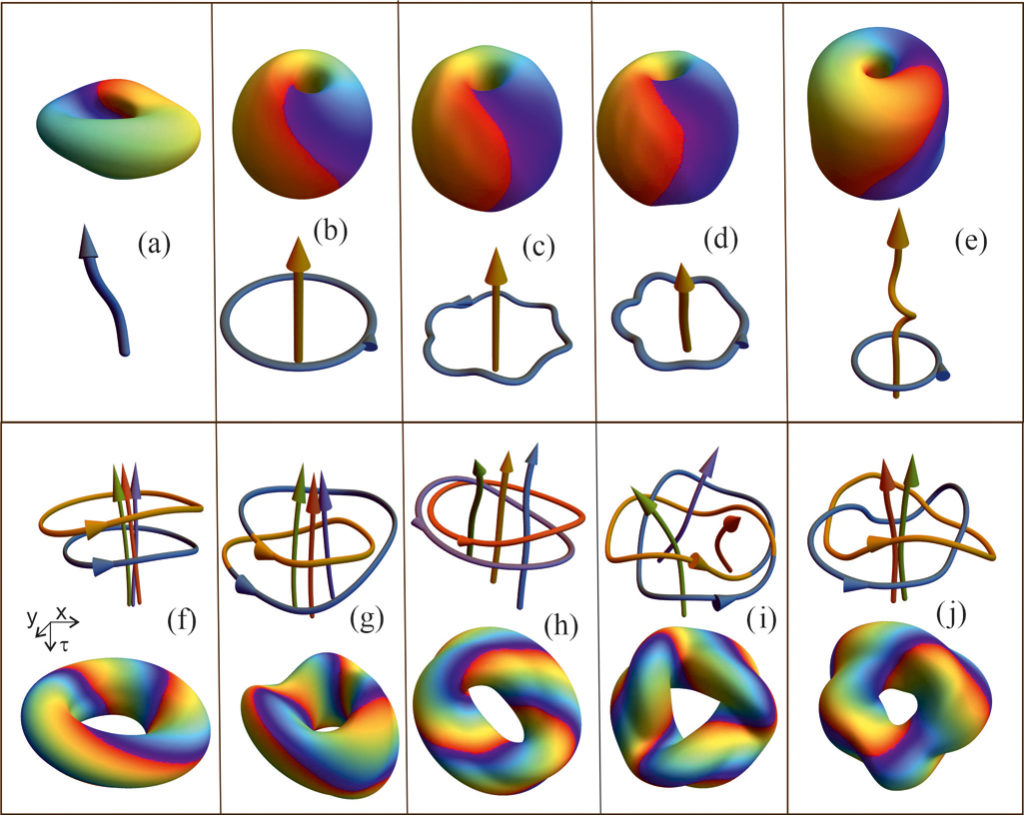 These drawbacks are absent for another type of solitons formed in laser schemes with saturable absorption. Their increased stability and “calibration” are ensured by the balance of the influx (laser pumping) and the outflow (absorption) of energy. Under continuous pumping such solitons’ lifetime is unlimited. Finally, the formation of fully localized (3D) topological laser solitons with a complex internal structure becomes real.

We will consider media with fast response to radiation which is close to linearly polarized. More precisely, we are talking about the field of the complex envelope of electric field or the distributions of radiation intensity and phase. An important characteristic of such solitons is the vector field of radiation energy fluxes (Poynting vector). The internal structure of topological laser solitons is determined by the singularities of this field which were found numerically.

Singular elements include points at which the radiation intensity I vanishes and, accordingly, the phase of the field is not defined. In 3D-space, the main singular element is a combination of such points, that is, vortex lines on which I = 0 and the energy flow forms a vortex. The vortex line can be open (its ends go to the soliton’s periphery) or closed. Further, the line can be knotless (can be turned into a straight line or a circle by smooth deformations) or knotted (in the opposite case). Finally, different vortex lines can be linked (they cannot be separated from each other without breaks) or unlinked.

Figure 1 presents a collection of relatively simple topological solitons. They differ from each other by the number of open (from one to three) and closed (from 0 to two) vortex lines, their knottiness and linking (single for (h) and double for (j)).

Different topological laser solitons exist in overlapping regions of the parameter space. Therefore, they form a rich alphabet with which information can be encoded. In addition to the increased stability inherent in dissipative solitons, they have topological protection — the topological characteristics are not sensitive to noise and parameter variations over a wide range. This emphasizes the prospects of their applications in tasks requiring increased accuracy and reliability of operations.