Risk due to explosion of the tank with LPG

Accident events that lead to tank explosion include Boiling Liquid Expanding Vapor Explosion (BLEVE), Mechanical Explosion (ME), Confined Explosion (CE) and Runaway Reaction (RR). Accidents that are accompanied by the explosion of the tank are distinguished by three effects: blast wave, thermal radiation and fragmentation. The fragmentation effect is most pronounced, since this type of hazard has the highest radius of action. The maximum fragmentation probability is accompanied by the emergence of two or three fragments. The fracture of a tank is characterized by aleatoric and epistemic uncertainty. Risk arises from the existence of uncertainty (aleatoric or epistemic).

Fragmentation of the tank is followed by the generation of primary fragments, while the blast wave initiates the formation of secondary fragments. Thermal radiation is the result of the formation of a fireball whose influence in the explosion oft he LPG tank having a volume of about 50 m3 is manifested at distances of up to 170 m,while the effect of secondary fragments is intensely expressed up to 125 m. The average range of the primary fragments in the explosion of a tank with LPG (50000 l) is 638 m, with a standard deviation of 284 m. 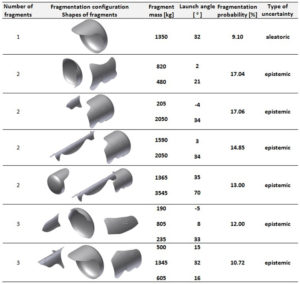 A tank explosion occurs when the wall temperature  reaches about 500-600 0C (BLEVE effect), since there is a drastic decrease in the tensile strength of the material (Rm = 252 MPa, S355J2G3). The critical pressure is 24.5 bar. The initial velocity of the fragment is 1,409 m/s, while the initial acceleration of the fragment is 22,048 m/s2 for a fragment mass of 205 kg and a wall temperature of 500 0C. Then the fragment reaches a range of 380 m. Fragment shapes and fragmentation probability do not depend on the size of the tank. The horizontal scattering angle of fragments containing the tank head is about ±180. This angle covers 19.5% of the generated tank fragments. The fragmentation density in this zone is greatest. A tank explosion is always accompanied by the generation of at least one fragment from this zone.

Over 70% of the fragments due to the explosion of the tank are in the range of 298 m to 902 m from the focus of the accident. The probability of impact in the target areas of the base of about 10 m2 at distances up to 600 m does not exceed 2.1·10-5 and linearly increases with the increase in the area of objects. The maximum risk of fragments due to explosion of tank is between 200 m and 400 m. The probability of a fragment falling between these distances within quadrant gabarits of 200×200 m is 8.2%.