Traffic noise is a known environmental risk factor for health. Health effects of noise exposure are hypothesised to occur via several pathways. Exposure to noise may affect the autonomic nervous system increasing heart rate, blood pressure and concentrations of noradrenaline, a stress hormone. In the long-term these reactions are suggested to promote low grade inflammation and cardiovascular morbidity. Although road traffic noise has been associated with hypertension, evidence for the long-term effects on hospital admissions and mortality is limited. We therefore examined the effects of long-term exposure to road traffic noise on hospital admissions and mortality in the general population in London, UK. We hypothesized that higher noise levels are associated with greater risk of cardiovascular morbidity as well as all-cause and cardiovascular mortality. 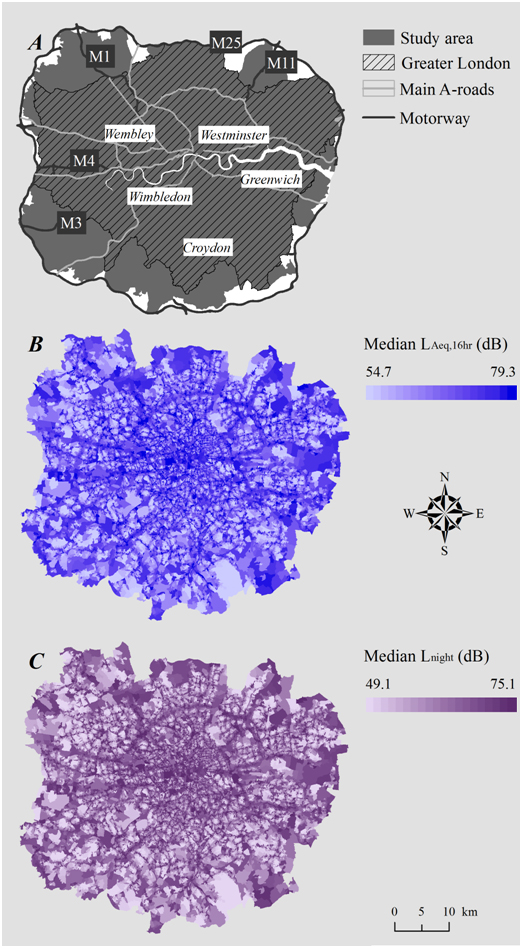 Fig. 1. Map of the study area (A), distribution of median daytime (B) and median night-time (C) road traffic noise at small area level.

The study population consisted of 8.6 million inhabitants of London between 2003 and 2010. Annual road traffic noise levels for the years 2003-2010 were modelled using the TRAffic Noise EXposure (TRANEX) model. This model uses detailed information on traffic flows and speeds for each year in the study period as well as detailed information on land cover and heights of buildings. We looked at levels of road traffic noise during the day (7am-11pm) and at night (11pm-7am) across different small areas, comparing this to deaths and hospital admissions from cardiovascular disease in each area for adults (aged 25 and over) and the elderly (aged 75 and over). We estimated the link between road traffic noise on these deaths and admissions, taking into account other factors such as individuals’ age and sex, as well as neighbourhood characteristics like ethnicity, smoking rate, air pollution, and socioeconomic deprivation.

The study area and small areas of highest noise exposure are shown in Figure 1. Deaths for all causes were 4% more common among adults and the elderly in areas with daytime road traffic noise of more than 60dB compared to areas with less than 55dB. Adults living in areas with the noisiest daytime traffic (more than 60dB) were 5% more likely to be admitted to hospital for stroke compared to those who lived in quieter areas (less than 55dB), which went up to 9% in the elderly. Night time noise (55-60 dB) from road traffic was also associated with a 5% increased stroke risk, but only in the elderly.

We note that these findings may be limited as we looked at areas rather than individuals. Therefore findings may not apply to individuals living in those areas as they may have different individual-level cardiovascular risk factors, length of residence in the particular area, time activity patterns including commuting to work, and the direction in which the windows on their residence face varies. However, our study does raise important questions about the potential health effects of noise in our cities that need further investigation.

In conclusion, this is the largest study to date to investigate environmental noise and cardiovascular disease in the general population. Results suggested small increased population risks of all-cause mortality and cardiovascular mortality and morbidity, particularly of stroke in the elderly, at moderate levels of road noise exposure. Findings are consistent with the larger body of evidence linking traffic noise exposure with hypertension.