Rodent cochlear nucleus – the common and the uncommon

Our perception of environmental sounds depends on the function of our ears. Sound vibrations received by each of our two ears are converted to electrical signals in the cochlea part of the inner ear. The electrical signals are then carried by the auditory nerve to the brain for further analysis. Each auditory nerve forms synaptic connections in a brain center called the cochlear nucleus. All the information about sounds must be processed in the two cochlear nuclei, one on each side of the brain stem, before being forwarded to higher brain centers. The cochlear nucleus contains a dorsal and a ventral part (Fig. 1). 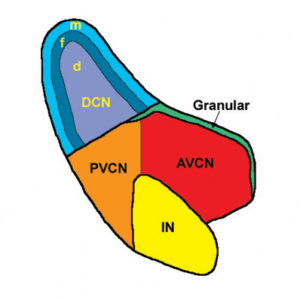 In our study, we traced boundaries of cochlear nucleus regions in 15 different rodents and 3 non-rodents to measure the volumes of the three DCN layers, AVCN, PVCN, IN, and granular region. We were able to clearly identify all regions in all the animals except one rodent, the mountain beaver, in which the 3 DCN layers were not distinguishable. Instead, its entire DCN appeared most similar to the molecular layer of the other animals. The cochlear nucleus volumes were larger for larger animals but not in proportion to their sizes: those of the smaller animals were generally larger relative to their body weights than those of the larger animals. This was especially true for the ventral cochlear nucleus. When the volumes were expressed as ratios of the total cochlear nucleus volume (relative volumes), there was considerable similarity in the relative sizes of cochlear nucleus subregions among most of the rodents, and even the non-rodents, despite a wide range of lifestyles and hearing parameters. However, two rodents that spend much of their lives underground in tunnel systems, the mountain beaver and pocket gopher, had relatively large granular region and DCN molecular layer compared to other rodents (Fig. 2), including some that also spend much of their lives underground. 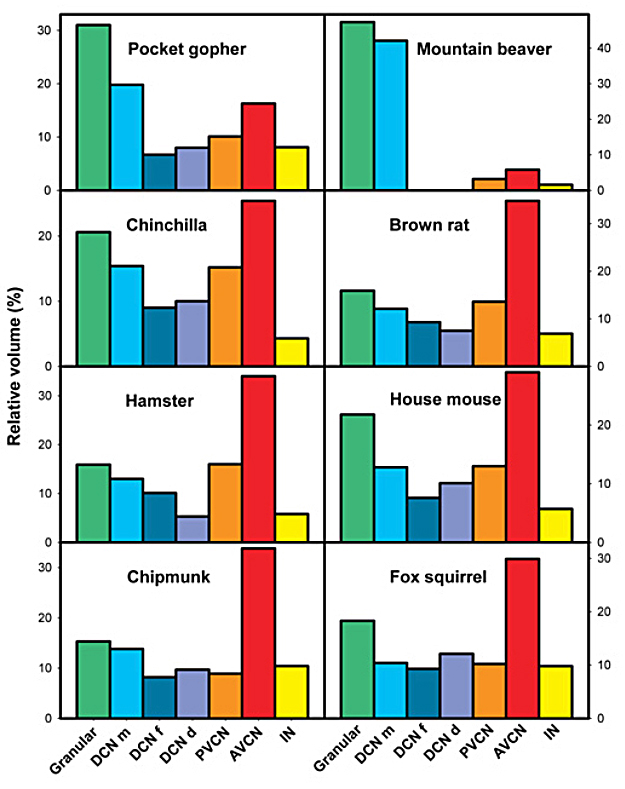 Fig. 2. Bar plots of cochlear nucleus subregion relative volumes in 8 rodents. Subregion abbreviations are as in Figure 1, and bars are colored to match the subregion colors in Figure 1. Note that, for pocket gopher and mountain beaver, the granular region and DCN molecular layer are larger than all other subregions, whereas in all other rodents, and the 3 non-rodents studied, the AVCN is the largest subregion.

The functions of the cochlear nucleus granule cells are not well understood, but they appear to be involved with interactions of other sensory information, especially tactile information, with hearing. Their functions seem to be especially important for the survival of some of the animals that live mostly underground.

Donald A. Godfrey
Department of Neurology and Division of Otolaryngology and Dentistry,
Department of Surgery, University of Toledo College of Medicine and Life Sciences, USA