The prognosis and survival of non-small cell lung cancer (NSCLC) patients is dependent on the stage of disease, which is based on tumor size and nodal and distant metastasis at presentation. 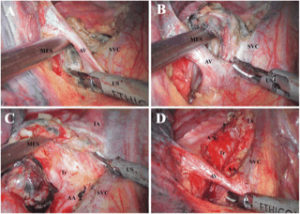 Clinical stage determines if patients should be referred to surgery or not and if adjuvant therapies should be administered. Unfortunately, clinical stage is often affected by false-negative occurrence, therefore surgical stage may be different from expected. This is called upstaging if final tumor stage is worse than predicted or downstaging if it is better. Obviously, prognosis and therapeutic pathway are influenced by any stage change, therefore it is common opinion that a correct surgical staging could improve survival, better identifying patients whose could get advantage from adjuvant chemio or radiotherapy. But, what does it mean “correct surgical staging”?

The most of time, significant postoperative stage arrangements are determined by nodal status assessment rather than T or M factors. Therefore, intra-operative nodal sample  should be always recommended to confirm or modify clinical stage.

However, many questions are still unsolved about best method to obtain a correct and  effective nodal assessment. We summarize them as follows:

1) How many nodal stations should be investigated during surgery?

2) How many nodes for each station should be sampled?

3) How much tissue for each node should be removed?

Common background of these questions is to obtain an accurate prognosis as much as possible. But there is another unsolved point about the role of surgical N staging. Indeed, it is common feeling that nodal removal could be also curative “per se“ apart to define tumor progression.

Several Authors have already investigated this topic and data exist to support a minimum threshold for lymph node assessment in the management of NSCLC, but there is no consensus for the optimal number of nodes.

In November 2015, at the sixty-second Annual Meeting of the Southern Thoracic Surgical Association, David and Co-Workers presented a study about NLNS (number of lymph-nodes sampled) as a predictor of OS (overall survival) and CSS (cancer specific survival) for NSCLC, then published in 2016. Based on the California Cancer Registry data from 2004 to 2011 for cases of stage I to III NSCLC treated with surgical resection, they found that five-year OS based on NLNS was 54.6% for more than 10 nodes, 59.6% for four to 10 nodes, 56.3% for one to three nodes, and only 42.6% for zero nodes across all stages of disease. The effect of NLNS on survival varied by stage. For stage I, higher NLNS predicted improved CSS and OS. For stage II, there was not a significant difference in CSS or OS for patients with four to 10 or more than 10 NLNS. For stage III, patients with no NLNS had shorter CSS or OS, but there were no significant differences between the other NLNS groups

Therefore, they concluded that NLNS influences both overall survival and cancer-specific survival, but the influence was modest when comparing four to 10 nodes and more than 10 nodes, especially for higher stage of disease and the optimal NLNS remained unclear.

The study is interesting. However, we identified some technical and methodological concerns that usually affects most of retrospective trails on this topic.

The first concern is about surgical technique. Because data came from huge databases, we suppose that the authors had no information on the sampling technique adopted by the different surgeons involved. In our opinion, it is essential to know whether each node was removed en bloc or by fragmentation. In fact, when nodes are removed partially or by fragments, radical resection could be incomplete and the total count could be overrated. Moreover, the count of intraparenchymal nodes (stations 10 and 11) could also had been influenced by different criteria adopted during pathologic examinations. The second concern is that the Authors were not able to compare cTNM with pTNM, recognizing cases of nodal upstaging, and then relate these occurrences with prognosis. Without these data, we could suppose that any survival improvement related to a wider number of nodes removed has been determined by a better staging and by correct adjuvant therapy administration. Their data showed that NLNS was less determinant in the upper stages, when adjuvant therapy is administered in any way, whereas it was more determinant in stage I because the choice to refer or not refer patients to chemotherapy is usually based on the absence of nodal involvement.

To conclude, we think that a further common effort to determine shared strategies about NLNS is  needed.